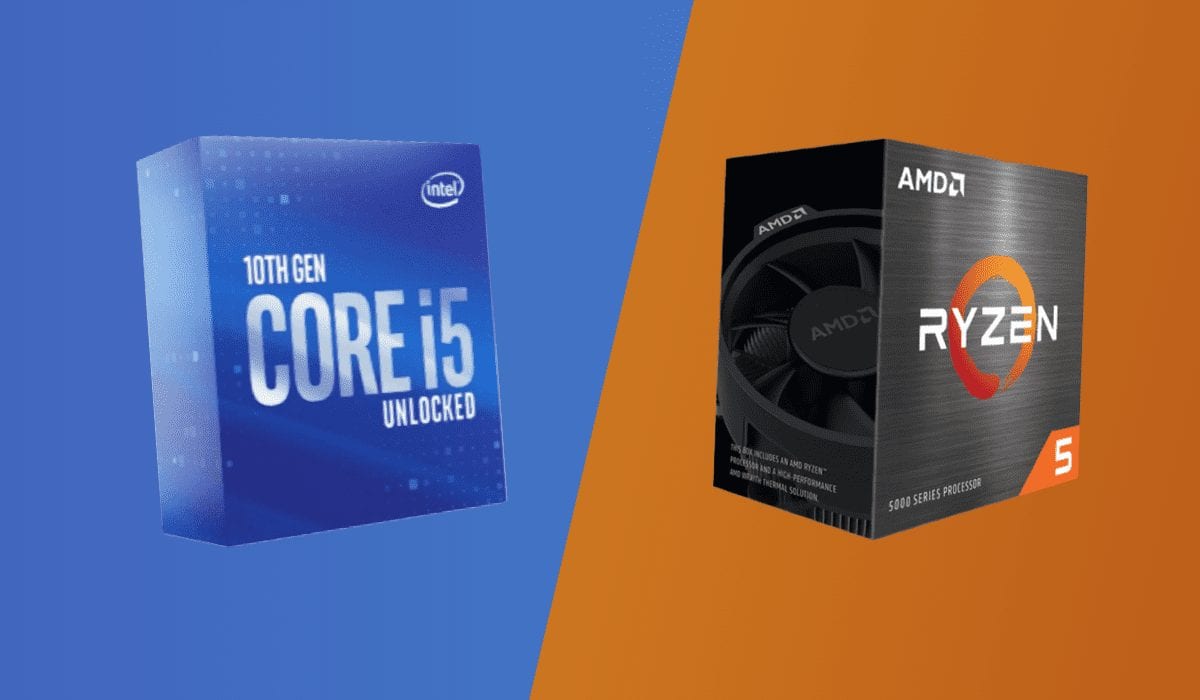 A little over five months after the release of Intel’s 10th generation Comet Lake desktop CPUs, AMD has announced their own Zen 3 Ryzen 5000 Series processors. Taking advantage of the fact that Intel did not surpass AMD’s Zen 2 processors in core, thread, or level 3 cache storage counts, AMD has opted to maintain the same specifications found in the Ryzen 3000 Series CPUs, but with an optimized internal structure… and a much more expensive price.

Intel’s selling point for their 10th generation CPUs was not that they had the best specifications, but rather that they were the best performing processors, particularly for gaming – and this feat was accomplished. Their CPUs did outperform AMD’s Zen 2 CPUs in gaming framerates, partly due to the lesser inter-core latencies found in the Intel processors. Nullifying this claim is what AMD would focus on when creating the Zen 3 Ryzen CPUs, knowing that their specifications were still superior. Now, in turn, AMD has accomplished to overthrow Intel as the gaming-CPU king by optimizing the internal layout of their CPUs through means of expanding the capacity of their Core Complex (CCX), which contains the cores and L3 memory cache. From being able to hold four cores and 16 MB of L3 cache, to now containing eight cores and 32 MB of L3 cache, the inter-core latency has been reduced by a significant margin, as the cores no longer need to communicate between CCXs, all while having plenty of L3 cache memory to use. The efficiency of this setup was actually proven a few months prior to the Ryzen 5000 announcement, with the release of the Ryzen 3 3300X: A four core, eight thread processor that had 16 MB of L3 cache, all situated within a single CCX. When it comes to gaming framerate benchmarks, this CPU was able to compete with the Ryzen 5 3600X, and, in some cases, even with the i5-10400, as most current generation games do not demand more than four to six cores, or eight to twelve threads.

With this upgrade in architecture, AMD can now lead Intel, not just in content creation performance, but also in gaming. Knowing full well that they have this superiority in the market – at least for the next few months, until Intel announces their 11th generation CPUs – as well as witnessing the gaming userbase bend over backwards and pay disproportional amounts of money for the slightest of upgrades during the release of Nvidia’s GeForce RTX Ampere 3080 and 3090 (which sold out within seconds), AMD has opted to increase the price of their CPUs by, what appears to be, an unjustified amount, solely for a change in architecture. This increase in price is especially felt in the entry-level CPU range, where the Ryzen 5 5600X will cost 50% more than the last generation Ryzen 5 3600X, at $300. The 10th generation Intel i5-10600K also launched with a more expensive price tag than the Ryzen 5 3600X, at $262, with the KF variation costing $238 – but even this price is still cheaper than the Ryzen 5 5600X.

So, now, the question arises: Is the Ryzen 5 5600X worth its cost when compared to the i5-10600K? Does it provide value and performance equivalent to its $38-$62 price differential?

Let’s take a look at their specifications and benchmarks (for the i5) and analyze the results in order to find out.

Starting with the 10th generation Intel i5 processor, the i5-10600K features six cores and twelve threads (the first i5 processor capable of hyperthreading capabilities), using a 14-nanometer lithography and a level three cache of 12 MB. In terms of clock speeds, it has an impressive 4.1 GHz base frequency that can be overclocked to 4.8 GHz. Other overclocking features that were implemented to the 10th generation i7-10700K and i9-10900K, like Intel Turbo Max Technology 3.0, are absent from this model. The memory which the i5-10600K can support is of DDR4 type, and has speeds of 2,666 MHz; with a maximum memory bandwidth of 41.6 GB/s. Of course, depending on the Z490 motherboard (LGA1200 chipset), this RAM speed can be overclocked to a 3,200 to 3,600 MHz sweet spot. The thermal design power of this CPU is questionably high, resulting in an energy efficiency far worse than any Ryzen 5000 series processor. It has a 125 Watt TDP, which can be lowered down to 95 Watts – which is still high – at the cost of throttling the operating frequency from 4.1 GHz to 3.8 GHz; something that very few will bother doing. The i5-10600K launched at a $262 price point, but the i5-10600KF variation (no integrated graphics processing) has an MSRP of $238 – neither include a stock cooler.

Next, we have AMD’s newly announced Ryzen 5 5600X. This processor makes use of 6 cores, 12 threads, and a level 3 cache of 32 MB. It uses a 7 nm TSMC FinFET processing node, and features support for PCIe 4.0 and AM4-chipset compatible motherboards. The base clock speed of the CPU is 3.7 GHz, which can be boosted to reach the 4.6 GHz mark. The Ryzen 5 5600X can natively support DDR4 memory with a base speed of up to 3,200 MHz, but of course the AM4 chipset compatible motherboards can support far beyond that, in terms of overclocking frequencies. Finally, the Ryzen 5 5600X is a very energy efficient CPU, with a TDP of only 65 Watts. The launch price of this Ryzen 5 processor is set to be $300, and the purchase includes a Wraith Stealth stock CPU cooler.

Despite having a very similar core and thread count, the Ryzen 5 5600X and i5-10600K CPUs are very much different. Firstly, the architecture: The Ryzen 3000 and 5000 series both work with a 7 nm fabrication process, whereas the 10th generation Intel processors still use a 14 nm lithography. Secondly, the L3 cache: The i5-10600K’s cores only have 12 MB of level three cache to work with, while the Ryzen 5 5600X cores have 32 MB: A 2.66x larger cache. Where the Intel i5-10600K exceeds is its clock speeds. It has both a higher base frequency of 4.1 GHz (versus 3.7 GHz) and boost clock speed of 4.8 GHz (versus 4.6 GHz). Where it falls off again, is energy efficiency. A 125 W demand for the performance of an entry-level CPU, is extremely high – in fact more almost double the TDP of the Ryzen 5 5600X at 65W. The TDP-down feature seems like more of a hassle that will often be ignored, as remembering to turn it on and off is something few will bother with. Another impact to the i5-10600K’s value is the fact that it is not PCIe 4.0 compatible – especially now that the Samsung 980 Pro has been released, and the Sabrent Rocket 4 Plus is just around the corner – as well the fact that the purchase of the CPU does not include a CPU cooler; though, to be fair, one can buy a better cooler than the stock Wraith Stealth for less than $20. Where the Intel i5-10600K does hold a considerable advantage, is the price. Especially the i5-10600KF variation, which costs $62 less than the Ryzen 5 5600X, for what seems to be an overall slight disadvantage in specifications and (maybe) performance.  Still, it is hard to argue that if the CPU is used on a daily basis, the i5-10600K will ultimately cost more than the Ryzen 5 5600X, due to its disproportionate thermal power demands.

Now, we don’t have much in terms of benchmarks for the Ryzen 5 5600X, as AMD has not displayed any in their initial announcement presentation, nor have they released any on their webpage, so it is hard to tell how the CPU will fare against the Intel i5-10600K. That being said, for AMD to have priced the Ryzen 5 5600X higher than its Intel counterpart, chances are it does exceed the performance of the i5-10600K which has been circulating for several months now.

AMD’s price increase from generation three to generation five of their Ryzen CPUs is ultimately a risky move. The reason why many initially hopped on the AMD CPU bandwagon, was because of how they appreciated the value these processors brought for their relatively low price. Intel was perceived as an unreasonably greedy company by many, but now the tables have turned.

Price aside, the Ryzen 5 5600X, and the i5-10600K, are CPUs that are suitable for those that enjoy current generation triple-A titles, and competitive online multiplayers. But as the new generation of games begin to launch, with the release of the Xbox Series X and Playstation 5, their performance is sure to fall, as developers are bound to make use of the 8-core 16-thread setup available with these consoles. For now, the R5 5600X and i5-10600K are ultimately going to be the best performance to value CPUs one can purchase with it comes to gaming, but they will eventually start falling off as the years go by. This is why the $200 cost of the Ryzen 5 3600X was an ideal price point for an entry level CPU, because it provided an all-around great performance, but with unmistakable future limitations.

It appears so. Not only due to the fact that it is likely to outperform the i5-10600K both in gaming and content creation applications, but also because it includes PCIe 4.0 compatibility, a stock cooler, and because it is so much more energy-efficient. The fact that the i5-10600K has a TDP that exceeds that of even the new flagship Ryzen 5000 series processors, is a serious sign that Intel has to work on optimizing their energy efficiency. Paying $40-$60 more for a CPU that provides more versatility, better workstation performance, more motherboards to choose from, and will eventually pay you back the difference in your future electric bills, seems like a no-brainer – even if the gaming performance between them was ultimately equal, which it probably won’t be.

As much as we’d like to blame AMD for this increase in price, it was really Intel’s 10th generation performance and pricing that provided AMD with the opportunity to capitalize on their competition’s shortcomings; and without even having to add additional cores, threads, or cache storage. Now, the ball is in Intel’s court. Let’s see how, and if, they will answer, in a few months’ time, when they announce their 11th generation CPUs.