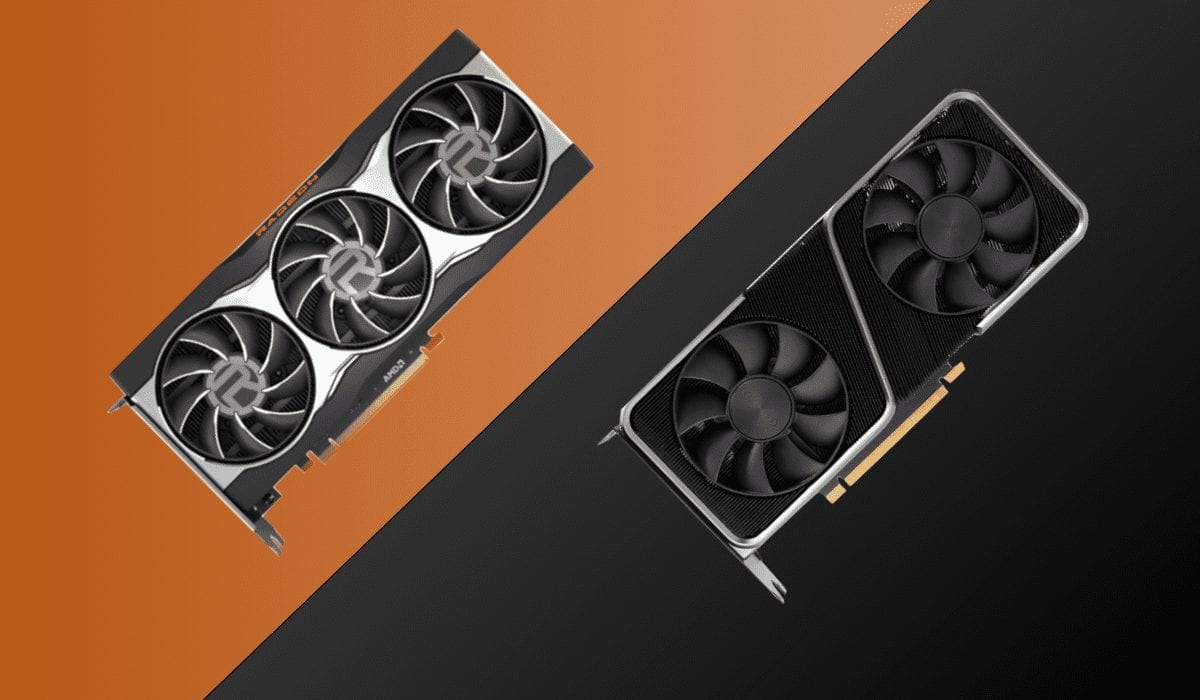 AMD has just announced the RDNA2 line up of GPUs. Finally, there’s competition at the top of the GPU market with AMD’s new offerings claiming to go head to head with the Ampere GPUs from Nvidia at each key market segment and price point.

The RX 6800 is pitched directly at the RTX 3070. Both of these cards aim to provide excellent 1440p gaming performance and 60FPS at 4K resolution. Both claim to exceed the capabilities of last generations range-topper the RTX 2080 Ti.

The RX 6800 is slated for launch on the 18th November so let’s dig into the specs and see which card will be best suited for your next build or upgrade.

Performance: Winner unclear but very promising for the RX 6800

Whilst we now have confirmation from AMD that the RX 6800 possesses 3840 Shader units, 96 ROPS and 60 compute units and RT cores, we haven’t included them in the comparison chart above because they aren’t directly comparable to Nvidias Ampere architecture. As such it’s impossible to speculate about ‘relative’ performance based on those numbers. Similarly, ‘boost clocks’ are meaningless in isolation because what each architecture can achieve in each clock cycle differs so massively. We can’t make assumptions about these numbers. What we can base our analysis off, for now, is the claims made by AMD in the announcement itself.

AMD showed their own metrics comparing the RX 6800 to the RTX 2080ti – we can take this as a proxy for the RTX 3070 since both perform very similarly.

At 4K AMD laid out their market stall with the slide heading ‘4K60’ meaning they intend this card to achieve 60FPS in 4K gaming. The precise settings they used to generate this graphic aren’t clear, but using the RTX 2080ti as a yardstick we can see that the RX 6800 appears to deliver around $80 worth more value than the RTX 3070, beating it in all titles under test and achieving at least 60FPS. One interesting detail here is the ‘+smart access memory’ footnote – these results are achieved using a Zen 3 CPU allowing better communication between CPU and GPU VRAM over PCIe 4.0. Nonetheless these results are impressive and show that if you’re a 4K gamer on a budget, the RX6800 deserves serious consideration.

At 1440p and again with ‘smart access memory’ the RX 6800 really does shine achieving well over 100FPS across the board even in demanding titles like Battlefield V and Borderlands 3 and with settings at ‘Ultra’. At this resolution, you’re getting the full benefit of detailed rendering at high visual settings along with high FPS. Given the price point of this GPU, we consider 1440p or 1440p ultrawide the best resolutions for the RX 6800 providing a fantastic balance of framerate and visual fidelity.

The RX 6800 has a huge 16GB of GDDR6 VRAM, doubling the amount of it’s competitor the RTX 3070. There’s also 128MB of what AMD call ‘Infinity Cache’ which is very fast memory directly accessible by the GPU core. This memory can hold frequently accessed data critical to processing performance and accelerate the GPU’s overall capabilities. Whilst the core specifications of the VRAM are the same with both using GRRD6, AMD has achieved higher bandwidth and claim this Infinity cache has triple the bandwidth of the conventional memory.

The utility of 16Gb VRAM for gaming is arguable: So long as there’s enough VRAM the game won’t perform any better with more, it simply goes unused. However, the RTX 3070 certainly looked a little miserly with ‘just’ 8GB on a $500 current Gen GPU and AMD have taken this opportunity to clearly beat that metric by doubling available VRAM. If you’re looking to game at 4K or wish to modify games with higher resolution textures there’s no doubt you’ll want as much VRAM as possible and the RX 6800 offers that at the most affordable price point yet. It’s likely that this doubling of VRAM accounts for much of the price difference between the RX 6800 and RTX 3070.

Additional technologies: RTX 3070 has the edge

It’s perhaps a little unfair to directly compare emergent technologies when one of the competitors is unreleased: We haven’t had an opportunity to evaluate any of AMD’s technologies first hand yet. Nvidia, however, has demonstrated the utility of DLSS 2.0 and are now on their second iteration of Ray Tracing support whereas the RX 6000 series is the first AMD GPUs to incorporate hardware Ray tracing.

DLSS 2.0 is a very interesting technology that allows Nvidia GPU’s to draw on a trained neural network to upscale resolution in real-time. The effects are impressive with graphical fidelity AND framerates improving markedly over a non-upscaled image. It’s a technology that works well with real-time ray tracing, offsetting the large performance penalty that feature imposes. The primary downside is that to take advantage of DLSS 2.0 Nvidia have to train the AI on super-high-resolution images generated In the game engine and then include that information in driver updates. To date, this encompasses very few games. Meanwhile, AMD is sensibly focussing on raytracing via the DXR API which is a much more widely adopted protocol supported in DX12. RTX cores will also be able to use this feature and in the coming years, we should see ray tracing becoming a standard part of game engines and new releases. AMD do also have supersampling algorithms which allow upscaling, but they’re not shouting their benefits from the rooftops and this leads us to believe they’re not a key part of AMD’s roadmap for the future like DLSS 2.0 appears to be for Nvidia. Finally, Nvidia also offers the now well-established NVENC hardware stream encoder to generate streams from live gameplay with minimal overhead. AMD can’t compete with the quality or efficiency of this at present, so we’ll have to see if RX 6000 series cards offer any improvements for streamers. Also in this vein, RTX voice and RTX broadcast use AI algorithms on Nvidia GPUs for noise reduction and live video processing for streamers. For those that need them these are nice to have features.

It seems like in this iteration AMD has concentrated on closing the gap to Nvidia in raw gaming performance rather than ‘value-added’ technologies and we absolutely can’t blame them for that particularly if the results are GPU’s that actually surpass Nvidia’s raw performance at each price point. But if you do want or need those additional features then it may be a reason to favour the RTX 3070 over the RX 6800.

Power and efficiency: A draw

AMD have always valued efficiency in their products and their use of the 7nm process allows them to capitalise on this. In gaming we perhaps don’t care about efficiency as much as we should: Not only is saving energy a laudable goal in itself, but efficiency means more performance because less heat to dissipate means a GPU can run faster without overheating. Both the RTX 3070 and RX 6800 offer very manageable power requirements with the 250W RX 6800 only drawing 30W more than the RTX 3070. Either of these GPUs will slot into an existing system and need just 2 8 Pin PCIe cables. Almost any reputable power supply at 550W or more will have these connectors already making these GPUs a one-step upgrade incurring no additional cost. With current CPUs drawing around 100W maximum we don’t foresee any problems using existing power supplies. Whilst the RTX 3070 draws less power, the RX 6800 looks like it should be marginally better performing so the extra energy is being put to good use – AMD wouldn’t be making strong claims about ‘performance per watt’ if it was otherwise.

Unfortunately one of the primary disappointment with Nvidias Ampere launch wasn’t pricing or performance – it was the fact that even a month later it’s still proving somewhere between difficult and impossible to actually buy any variant of the graphics cards. It’s now clear that between low yields on the Samsung ‘8N’ process, Low availability of the GDDR6X memory on the 3080 and 3090, and general supply and distribution issues partly due to the COVID-19 pandemic supply issues will likely last well into 2021.

We obviously can’t judge the availability of an as-yet-unreleased product but we’re hopeful that whilst it’s facing the same challenges it should have the measure of some of them. For one it’s been able to witness Nvidias problems and hopefully take steps to alleviate them. Secondly, the TSMC 7nm process is now a mature and well-defined process with known yields and capacity. Thirdly the RX 6000 series cards use more widely available GDDR6 VRAM, albeit buckets of it with 16GB required for every GPU. Finally, Consumers now have a choice at the high end, meaning that demand is split across more potential products. We still expect these competitively priced and high performing GPU’s to sell out fast, but we hope that another option eases the demand-side pressure on the high-end GPU market as a whole.

Conclusion: The RX 6800 is an exciting  GPU for high end gaming

Overall, AMD has really impressed with the RDNA 2 announcement. Not content with slaying one behemoth with Zen 3 trumping Intel’s performance, they’re waging war on two fronts in tackling Nvidia simultaneously. For the last 2 generations, AMD has struggled to challenge NVIDIA and whilst they’ve had good mid-range options in the shape of the Vega 56 and Radeon RX 5700XT, the RTX 2080 tier has had free reign. Now, we can see the fruits of AMD’s hard work in the RX 6000 series. As the entry-level model at $579 the RX 5800 offers a compelling option for 1440p high FPS gaming or a very competent 4K GPU. With the information available at the time of this announcement, we’d recommend you pairing this GPU with a 1440p monitor and high-performance CPU for high FPS gaming, or else moving towards 1440p ultrawide and a mid-tier CPU for fantastic AAA gaming. 4K being as demanding as it is will benefit from the additional power of the RX 5800XT.  You can see our recommended CPUs and builds using this new GPU here.