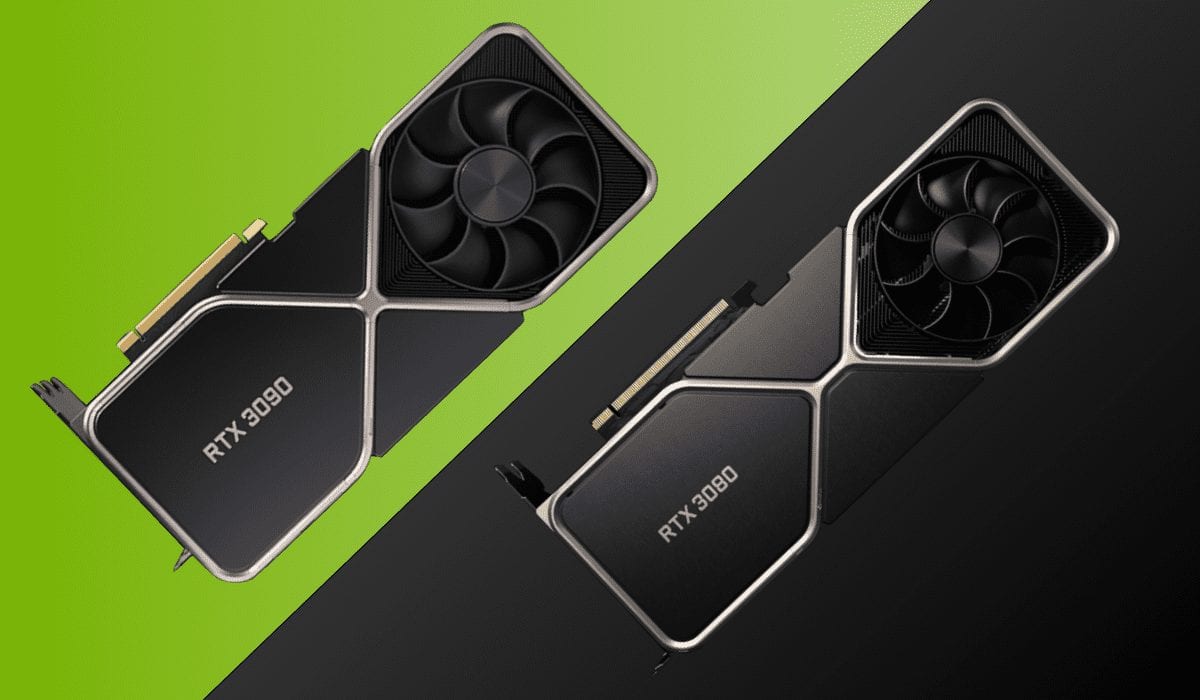 If you have been waiting for Nvidia’s upcoming 3000 series GPUs, then you know that the time draws neigh onto the official release of these powerful new GPUs – the RTX 3070, 3080 and 3090. But since no company is immune to leaks, and especially not Nvidia, we have been receiving a slow stream of information regarding the three first GPUs to be released toward the end of September: The current flagship, GeForce RTX Ampere 3090, and the position two GeForce RTX Ampere 3080. Now that we have the actual specifications, let’s compare and analyze the two and see which model best fits your needs; which is a matter of whether the RTX 3090 is worth its increased price tag, or if the RTX 3080 GPU displays enough value to fulfill your gaming needs.

But before we get into the comparison of the RTX 3080 and RTX 3090, let’s take a look at what they have in common. Firstly, both models (as well as, most likely, all 3000 series GPUs) will have second-generation Ray Tracing Cores and third-generation Tensor cores. Next, both models are set to use variants Nvidia’s GA102 GPU, which makes use of the Ampere architecture and an 8nm Samsung fabrication process. This GPU has a die size of 627 mm², 28 billion transistors, and will support DirectX 12 Ultimate. Another common feature of these two models is their use of the GDDR6X VRAM. Micron’s GDDR6X offers both an increased memory bandwidth of 912 to 1,008 GB/s (over the 672 to 768 GB/s memory bandwidth of the previous generation VRAM) as well as a slight power improvement in comparison to the GDDR6 (7.25 pJp vs 7.5 pJp). Both GPUs will also feature PCI Express Gen 4, as well as Nvidia’s DLSS, GeForce Experience, GPU Boost, and G-Sync software. Finally, the RTX 3080 and the RTX 3090 will feature three DisplayPort 1.4a ports, as well as a HDMI 2.1 ports – though the number of ports will ultimately be aftermarket dependent.

Where the RTX 3080 got shortchanged the most, in comparison to its RTX 3090 counterpart, is its VRAM capacity. The GeForce RTX 3090 will come equipped with 24 GB of GDDR6X VRAM, versus the only 10 GBs of the RTX 3080: a substantial difference. The 10 GB VRAM of the RTX 3080 also puts it behind the current generation RTX 2080 Ti which has 11 GB of VRAM; though the RTX 3080’s use of GDDR6X memory means that its VRAM will have a faster bandwidth and better power management. But when compared to the RTX 3090, the RTX 3080 GPU will trail, not only in the size of its VRAM, but also its quality. The bus width of the RTX 3080’s memory is 320-bit, whereas the RTX 3090’s memory has a 384-bit bus width. Also, the max bandwidth and memory for the latter GPU is 936 GB/s and 9,750 MHz, which is superior to the 760 GB/s bandwidth and 9,500 MHz of the RTX 3080. When compared to the previous flagship 2080 Ti, as well as the 2080 Super, both these GPUs offer far more VRAM storage that is of higher quality than their predecessors. Of course, if the rumors are true about a potential RTX 3080 Ti with a VRAM of 12 GB, the difference with the previous generation becomes a bit less impressive, at least in terms of RAM.

Though we do see that the RTX 3090 has substantially superior specifications when compared to the RTX 3080… we still have to wonder: Is the RTX 3090 worth its price?

Well, the answer really depends on what kind of gaming setup you are looking to make, and what type of gaming you prefer. For multiplayer competitive games, both these GPUs are overkill, so the question is whether you are content in playing triple-A games at 144 FPS, and if so, on how high of a resolution. With the info we have now, it is looking like the Nvidia GeForce Ampere RTX 3080 will perform can easily reach the 144 Hz mark on a 1440p monitor, a feat that the generation GeForce RTX 2080 Ti could not accomplish – despite having a $400 higher price tag. Still, playing triple-A games at 144 Hz, on maximum settings, and resolutions above 1440p may not always be possible. The RTX 3080 will definitely be able to handle any game (current or next gen) at high resolutions, and at well above 60 FPS, but at 144 Hz the graphical processing power demanded is extremely high, proven by the performance of the RTX 2080 Ti. A great example is Call of Duty: Warzone. Benchmarks carried out by ComputerBase with an Intel i9-9900K CPU and top of the line RAM show us that the RTX 2080 Ti FE was unable to reach a framerate above 100 FPS at 1440p. Whether or not the RTX 3080 will be capable of pulling off over 120 FPS for 4K resolution with its new 8nm Ampere architecture and GDDR6X VRAM is yet to be seen; but until we await the benchmarks, it must be noted than next-generation games will become more and more hardware demanding, so we can’t be sure if it will be able to sustain such framerates and at such high resolutions in the future.

On the other hand, the GeForce RTX Ampere 3090 seems poised to be the ultimate GPU for gaming… or for any other type of application, really. Of course, how well it will perform in comparison to the RTX 2080 Ti or the RTX 3080 is something we’ll have to wait in order to see, though on paper it does show promise as being the 144 Hz, 4K, GPU champion that we’ve been waiting for. Also, Nvidia has claimed that the RTX 3090 will able to play games at 8K resolutions at above 60 FPS, but that is also something that we need to see in benchmarks. If it is able to do so, though, then it will definitely be worth saving for, as the luxurious RTX 3090 is going to cost a pretty penny.