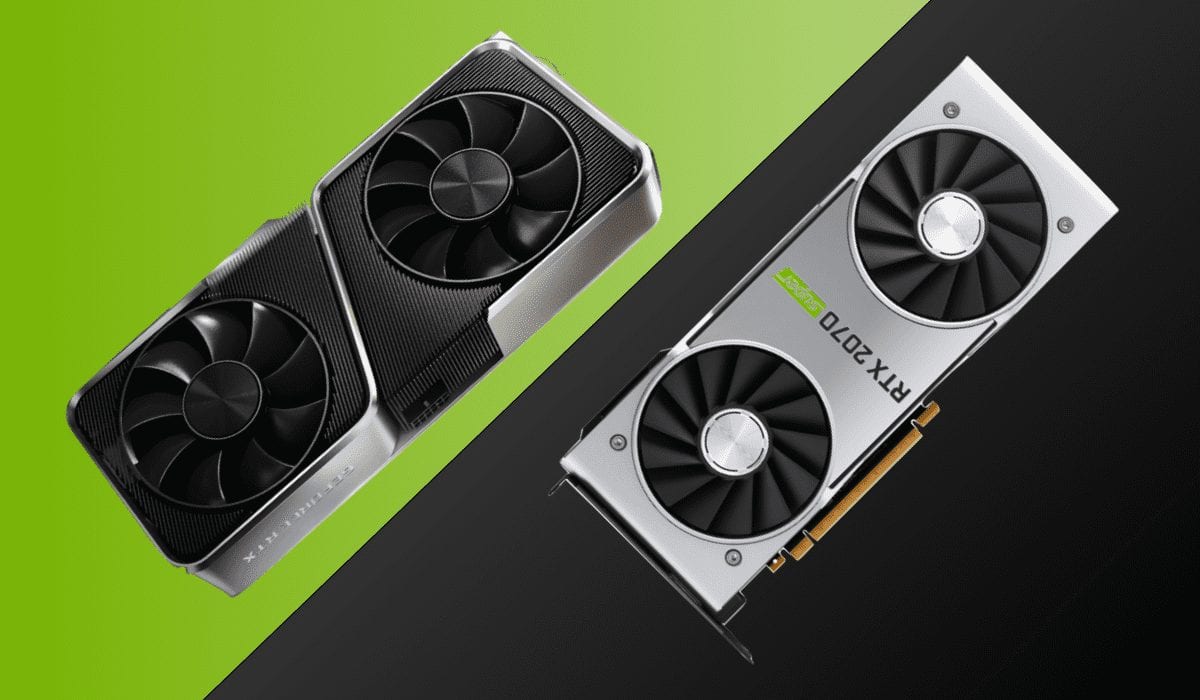 Well, the wait is almost over. Nvidia’s keynote released official specifications of the RTX 3070 and the buzz has been immense. Slated for release in October with the exact date yet to be confirmed, the RTX 3070 looks like it will outperform the previous generation of Nvidia Turing GPU’s in their entirety: Yes, Nvidia claims that the $499 RTX 3070 outperforms the $1199 RTX 2080 Ti! Let’s dig into those specifications and compare them to the previous ‘high mid range’ option, the RTX 2070 Super, and discuss what they mean.

The fabrication is known to be Samsung’s ‘8N’ process, moving on from Turing’s 12nm GPU process at TSMC foundries. This allows Nvidia to claim over double the performance per watt showing that this is a significant advance. More efficiency means the chip stays cooler and be run at higher speeds. The TDP of the RTX 3070 is 220W, a respectably low power consumption for a card that boasts this performance. The quoted boost clock provides very little information as it can’t be compared between different architectures, so disregard that metric.

One of the most interesting features is the huge number of quoted shader cores: these individual cores parallelise the rendering of graphics and more is better. But the huge leap here isn’t quite as it seems. Traditionally one clock cycle allowed one compute operation but much like the ‘Double Data Rate’ access in RAM Ampere’s shaders complete two calculations in a single tick. This is due to the discrepancies in Floating point 32 vs Floating point 16 calculations, and so it appears that Nvidia have doubled the shader units to make this simple to understand. The Nvidia Keynote was a little guarded around actual specifications in terms of numbers of Ray Tracing and Tensor cores and focussed on compute performance metrics: these can be misleading when translated into actual gaming performance so we will have to wait to get our hands on these cards before we can talk about their actual performance with certainty. However the Floating Point 32 performance can be relevant to frame rates and is quoted at 20 TFLOPS up from 9 TFLOPS in the RTX 2070 super. That’s a huge leap if it can be applied to game rendering. Quoted and tested performance in titles that can use the Ray Tracing and Tensor Cores with DLSS2.0 are certainly impressive so we’ll discuss that technology a little more later.

The RTX 3070 has 8Gb of standard GDDR6 memory, unlike the higher tier RTX 3080 which moves to the higher speed GRRD6X. 8GB has become the standard capacity for memory on a high end card and it’s ample for the most demanding titles and 4K Gaming. There is a slight uplift in Bandwidth from 448 to 512GB/s and this will no doubt aid some of the performance increase. The memory configuration is the one area where the RTX 3070 most resembles the GPU it replaces.

Nvidia’s Keynote heavily focussed on their AI implementations in relation to gaming. Turing brought hardware ray tracing into the mainstream but the performance impact made it a novelty in the few games that used it. For Ampere Nvidia have focussed their energies on using AI to combine the Ray Tracing and Machine learning cores of their GPU’s to give a huge performance uplift In games. The key technology is DLSS 2.0. This means ‘Deep Learning Super Sampling’. This Technology uses a supercomputer to train a neural network from incredibly high resolution 16K images. The neural network is game specific and included in Nvidia’s graphics drivers. When a game is running the GPU is able to generate a lower resolution frame and then use the GPUs Tensor cores and the neural network to upscale this to the native resolution. The effects are incredibly impressive, and the lowered computational load on the GPUs shader cores means frame rates can stay high. Importantly this technology overcomes the computational load of real time hardware Ray tracing the technology that hit frame rates on Turing GPU’s so hard.  In flagship DLSS 2.0 titles such as ‘Control’ and ‘Death Stranding’ this technology appears to be a true next-gen leap in both visual fidelity and performance. A DLSS 2.0 up-scaled game looks better than native 4k, and runs 60-80% faster than 1440p native resolution. That’s a truly impressive feat. Whilst 4K AAA gaming has been the preserve of only the highest end GPU’s up until now, the RTX 3070 should be wholly capable of gaming on a 4K TV.

The RTX 3070 can utilise a PCIe 4.0 Bus – but let me put your mind at ease – you will NOT require a new motherboard to use this card! PCIe is both forwards and backwards compatible so this PCIe 4.0 card will fit and work well in an existing PCIe 3.0 Motherboard slot. In fact not even the prodigious power of the Ampere GPU’s can saturate the PCIe 3.0 available bandwidth so there will be no negative impact of running this GPU in a system without PCIe 4.0. And that’s good because as of today, only recent AMD motherboards implement PCIe 4.0.

One of the interesting features highlighted during the keynote was Nvidia’s RTX I/O. This PCIe Gen 4.0 technology addresses the storage access bottleneck that can hamper gaming performance. Because of storage limitations images and data are stored in a compressed format on a storage drive. Before use they need to be read, decompressed by the CPU, then passed over the PCIe link to the GPU. When hard drives were slow this wasn’t an issue and CPUs could keep up without a problem. Now that PCIe 4.0 drives allow transfers of up to 7Gb/second the task of decompressing the data can actually overwhelm the CPU causing performance issues in-game. Nvidia has used the enhanced flexibility of PCIe 4.0 to cut out the middle man: The GPU will be allowed direct access to the data on the drive, freeing the CPU of that burden and lowering the overhead for data transfer. Whilst this is impressive technology, it’s not something that will be implemented right away. AMD X570 and B550 chipsets have PCIe 4.0 now, however, Intel’s recent Comet Lake CPU’s are still not PCIe 4.0 equipped. Z490 series motherboards are capable of implementing it but this won’t become live without Intel’s next generation CPU. Overall this technology looks like one that will mature over time as developers and systems adopt it rather than a killer feature on release day.

Conclusion: Price and Value with the RTX 3070

Finally, we come to the price.  This and the memory specification are the only places where the two cards are really comparable. The RTX 3070 releases at $499. Put simply, so long as the performance promises are met this GPU will offer incredible value. It should nearly double the performance of the RTX 2070 Super, and be capable of playing  DLSS 2.0 enabled AAA games like Death Stranding and CyberPunk in 4K at 60 FPS with settings on ultra and ray tracing on. This GPU is set to redefine standards in PC gaming, and you only have to wait until October to experience it for yourself.

If you are looking to do a build now, and can’t wait for the RTX 3070 Super to be released, here are some of our graphics card guides you might find useful in narrowing your search.