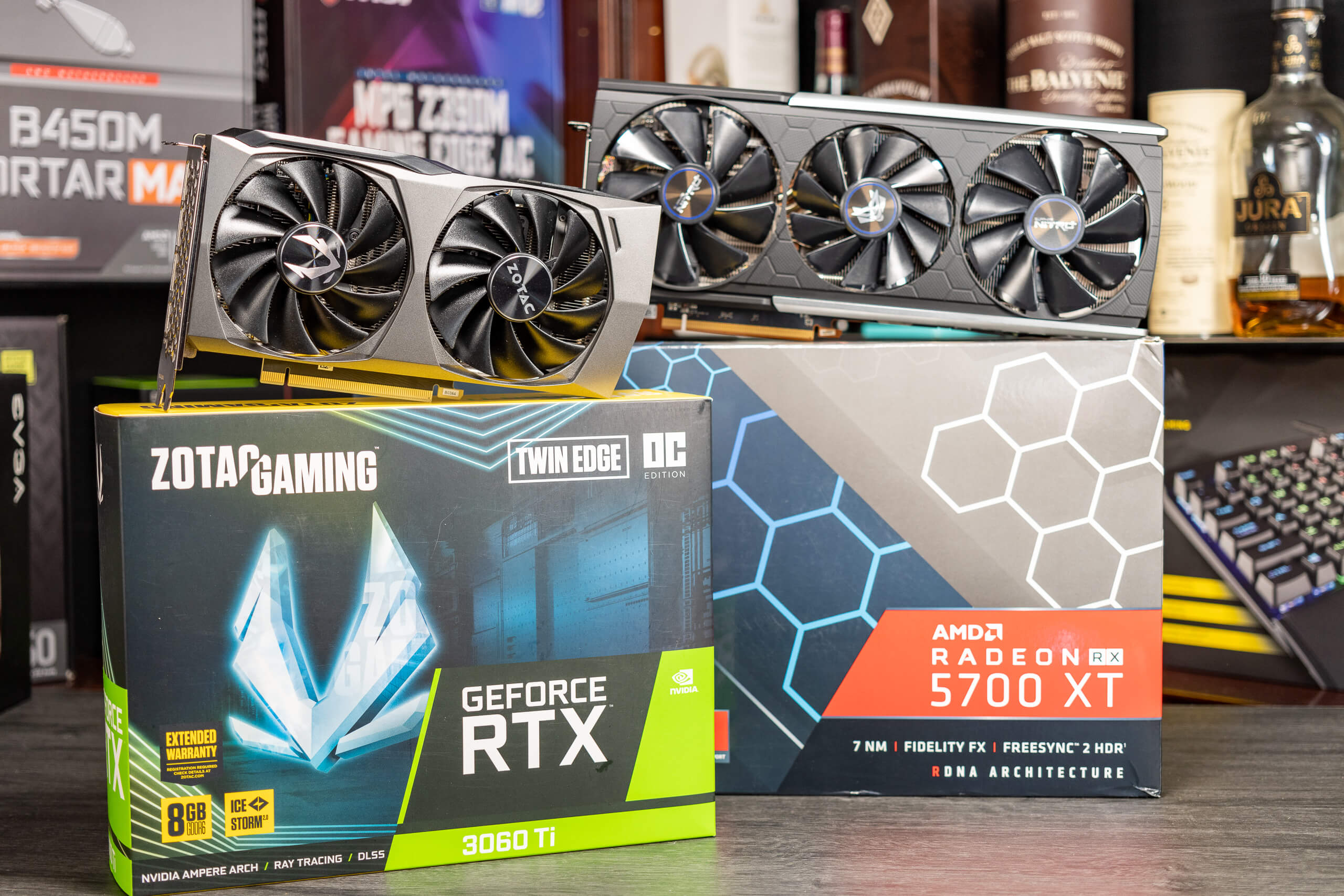 To compete against AMD’s initial batch of Radeon RX 6000 Series graphics cards, Nvidia launched the brand-new RTX 3060 Ti. Utilizing all the features found in Nvidia’s new Ampere architecture, the GeForce RTX 3060 Ti is the only new-generation GPU available at  $400 or less.

Since we’ve already compared the RTX 3060 Ti to its higher-end predecessor – the RTX 2080 Super – and found it to be in all ways superior, let’s now compare it to what AMD has to offer in the same price range: The Radeon RX 5700 XT. Of course, this GPU is of AMD’s previous generation RDNA, so it won’t be as powerful as Nvidia’s latest Ampere architecture,

but comparing the two will provide a good indication of how technology has progressed, and how the same money can now buy you far more graphical power.

AMD released their new Radeon RX 6000 Series GPU in November 2021, but stock has been scarce. The least expensive of this series is the Radeon RX 6800, and it has an MSRP of $579; making it more expensive than both the RTX 3060 Ti and the RTX 3070. This price is justified as the Radeon RX 6800 does outperform both by a significant margin. Still, a GPU aimed squarely at 1440p gaming and perhaps even 4K at 60 FPS at a more affordable price range, like the GeForce RTX 3060 Ti, is one that AMD has yet to cover with their new lineup. Perhaps a Radeon RX 6700 will be released to challenge this market but there is no official AMD announcement for any such release.

Within November of 2020, AMD did “release” their new Radeon RX 6000 Series GPUs, though the least expensive of this series is the Radeon RX 6800, and it has an MSRP of $579; making it more expensive than both the RTX 3060 Ti and the RTX 3070. This price increase is not entirely unjustified, as the Radeon RX 6800 does outperform both by a significant margin. Still, a GPU model that can perform at 1080p at high framerates – and perhaps even 4K at 60 FPS – at a more affordable price range, like the GeForce RTX 3060 Ti, is one that AMD has yet to cover with their new lineup. Perhaps a Radeon RX 6700 will be released to fill this void, but no word from AMD has been announced for any such release.

Currently, the real question is: Does the GeForce RTX 3060 Ti warrant its $399 price tag? Nvidia has been very adamant about promoting their new generation ray tracing (resulting in quite a bit of drama from their PR team), which means we should probably not expect many GPU options at a lower price range to be releasing anytime soon – other than perhaps a GeForce RTX 3060 variant with less VRAM.

This high entry-level to new generation GPUs may push those looking for a dedicated gaming build to opt for a different route: The Playstation 5 or Xbox Series X. Needless to say, a PC does offers far more overall utility – and a wider range of available games – but the gaming performance of the new generation consoles is actually quite decent; allowing users to play at 1080p and 60-120 FPS for only $499. The demand for an affordable yet capable graphics card is as high as ever – and it’s this demographic is who Nvidia appears to be trying to capitalize on with the release of the GeForce RTX 3060 Ti.

With that being said, let’s see how the GeForce RTX 3060 Ti fares against the similarly priced last generation Radeon RX 5700 XT, and come to a conclusion on whether or not this GPU is worth its $400 asking price.

Though the Radeon RX 5700 XT has a 36% smaller die than the GeForce RTX 3060 Ti, it also has 40% less transistors, so it doesn’t fully utilize its inherently smaller lithography.

Also, despite the generational disparity, the VRAM of both GPUs is identical in speed and capacity.

The Radeon RX 5700 XT outshines its Nvidia successor in TMU count, texture fill rates, and FP16/64 theoretical performance. Whilst it has a higher base and boost clock speeds note that these cannot be used to compare performance between different architectures. Also, the 40 Compute Units that it comes equipped with are previous generation units that are not nearly as powerful as those of the Radeon RX 6000 Series which have redesigned data paths, pervasive fine-grain clock gating, and new pipeline rebalancing. In all other aspects, the GeForce RTX 3060 Ti is superior.

This Nvidia Ampere GPU features 38, 2nd generation, Ray Tracing cores, 152, 3rd generation, Tensor Cores (AI processors), and new streaming multiprocessors (SM) which have twice the throughput. These technologies are all exclusive to Nvidia, and therefore lacking from the Radeon RX 5700 XT. Pair these aspects with the GeForce RTX 3060 Ti’s 90% more shading units, and it gains a sizeable specification lead against its equally-priced previous generation counterpart.

The GeForce RTX 3060 Ti has all the latest software that accompanies Nvidia’s Ampere architecture, from AI powered broadcasting and streaming applications and Deep Learning Super Sampling (DLSS) 2.0, to a 1-year GeForce NOW Founder’s membership. It also includes Nvidia Reflex, which drastically lowers end-to-end input lag, and allows the GPU to be paired with certain monitors built by Nvidia-partnered manufacturers that even further reduce this latency, and display the metric in real time on-screen.

On the other hand, AMD may still be missing any AI powered features, like DLSS and Tensor cores, but they have implemented a new L3 cache named the Infinity Cache for the Radeon RX 6000 Series GPUs, as well as a one-click overclocking and Smart Access Memory, that utilizes bandwidth from Ryzen 5000 Series CPUs in order to remove memory bottlenecking issues. Of course, these are all features of the new Radeon RX 6000 Series GPUs, and are thus absent from the Radeon RX 5700 XT. This GPU has little to offer against the Nvidia GeForce RTX 3060 Ti, as its Adrenalin Software is similar to Nvidia’s GeForce Experience, its Anti-Lag feature is already eclipsed by Nvidia’s Reflex (and AMD’s second-generation Anti-Lag), and its Intelligent Sharpening or Fidelity FX features are outclassed by DLSS.

Both AMD and Nvidia have struggled heavily in regards to producing sufficient amounts of stock to cover the high demand that the market requires. Paired with the fact that scalpers have become aware of this shortcoming and have purchased GPUs en masse in order to capitalize on the scarcity, finding any new-generation graphics cards at their original MSRP is all but impossible. Currently, Amazon has sellers that are trying to sell the GeForce RTX 3060 Ti at more than double its price Even worse, the Radeon RX 6800 can be found for triple its price. Altogether a shameful ordeal for these highly anticipated GPUs.

The Radeon RX 5700 XT can readily be found, both new and used. It has not dropped in price and is retailing at around $400 new or $300 used. Whilst scarcity remains across the entire Graphics card market and until AMD releases a replacement it is unlikely to be discounted.

As expected, the GeForce RTX 3060 Ti dominates its previous generation competition – able to average above 144 FPS at 1080p. The Radeon RX 5700 XT still holds its own, averaging above 120 FPS at 1080p, and over 60 FPS at 1440p. Both GPUs begin to struggle at 4K as even the GeForce RTX 3060 Ti falls short of the 60Hz baseline refresh rate for many titles – but note that the benchmarks are at ultra settings, so you can use lowered settings to improve performance. Still note that as the new generation of games emerges there is a likelihood that most game developers will opt to maximize their title’s potential to AMD’s technologies. This is because both new-generation consoles have RDNA 2 GPUs. The GeForce RTX 3060 Ti’s potential to process games at 4K and 60 Hz may drop off in the future, but this is hard to predict with certainty.

The RTX 3060 Ti retails at $399 and up, which is also the current retail price for the RX 5700XT. So long as you can find stock and do not overpay for a 3060 Ti the decision is a no-brainer: The RTX 3060 Ti outperforms the 5700 XT in every metric and by a large margin. It’s exceptionally well suited to 1440p and will play AAA titles at high resolution and high settings whilst maintaining well over 60FPS in even the most demanding titles. Pair it with a 1440p variable refresh rate monitor for best effect.  It can also be used as a very high FPS 1080p card, but you will need a fast refresh rate monitor – at least 144Hz, preferably 240Hz for esports – and a top tier CPU to keep up with it. If your PC is mixed-use and you use a 1440p ultrawide or 4K monitor, the 3060 Ti has enough power to ensure you can still play games on it in your downtime with slightly reduced settings – but make no mistake the capability of this card will still impress. DLSS is the cherry on top in enabled titles, with a 50%+ lift to performance at almost no cost to visual fidelity. Finally, there’s the versatility offered by the CUDA cores and advanced features like Tensor cores: The 3060Ti is the most cost efficient means yet to accelerate AI and 3D rendering workflows, and video editing as well. Only the 8GB VRAM limits its utility in those areas, but you will have to pay significantly more to obtain more VRAM and 8GB is suitable for most tasks.

The 5700XT meanwhile lacks many of the advanced features, plus it underperforms significantly vs the 3060Ti in gaming. It’s capable as a mid range 1440p GPU but does not provide the same experience at 1440p Ultrawide or 4K and we cannot recommend it at those resolutions. At $400 it is too expensive for a 1080p GPU, there are more cost effective options. Until its price is significantly reduced, to $300 or less, it is not worth considering unless you have a specific workload that is accelerated by the OpenCL APIs rather than the more widespread CUDA implementations.

The RTX 3060 Ti heralds Nvidia’s assault on the GPU market with the Ampere release: It’s an extremely powerful GPU and the price to performance star of the GPUs released in 2020. If you’re able to purchase one at $450 or less it’s the perfect GPU for most users, balancing impressive performance, low power draw, fantastic additional features, and an affordable price. The one fly in the ointment is availability: We can only hope that supply issues ease in 2021 as promised, and perhaps that AMD has a worthy competitor ready to keep Nvidia honest in their pricing and open up choice in the GPU market.