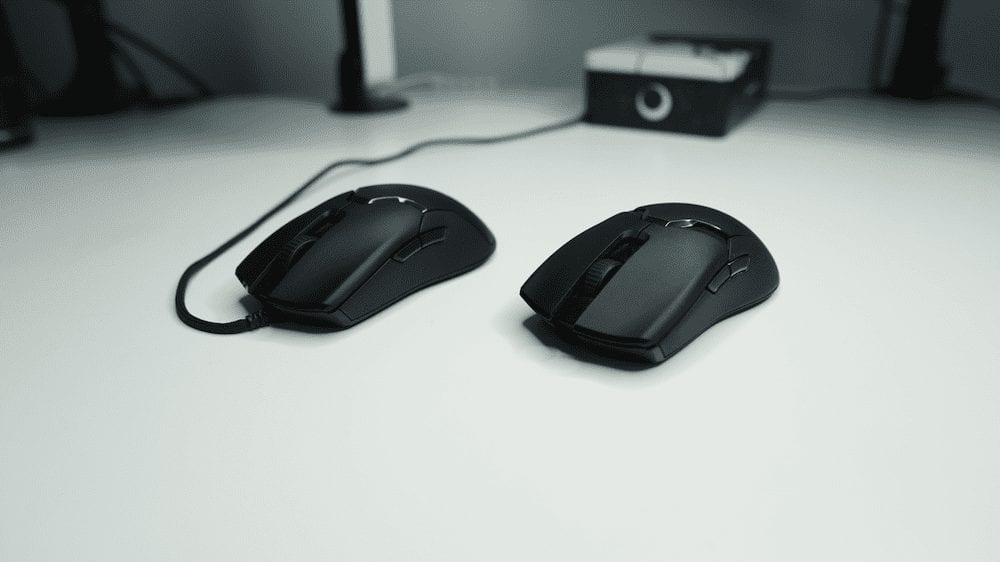 To make it clear, the both products have the exact same shell and shape. Both mice are also symmetrical and can be used left or right handed with side buttons on both sides. Basically the main difference here is in the tech itself, so let me tell you the benefits and disadvantages of 8KHz polling next.

If you’ve read the marketing material that Razer has published with the Viper 8KHz, you’ve probably seen the terms/words “HyperPolling”, “MotionSync”, “0.125ms” and “8X FASTER” for example. The terms seem to be just for marketing, but there is truth behind these. 1000 Hz polling rate is limited to 1000 reports per second, which means that the X/Y position that mouse sensor records is communicated to your system PC 1000 times in a second at best whereas 8000 Hz polling rate can do it 8000 times in a second. 1000 times is usually more than enough if you don’t move your mouse very fast, but in-game there can be situations with some fast flickshots, especially when performed with higher CPI values, where 1000 hz is limiting your accuracy by not being able to saturate the pixels on the distance that you move your mouse in.

Another benefit of 8000 Hz is that every report is received 8 times faster from your mouse to your system. It can take up to 1ms for your system to receive a report at 1000 Hz, whereas with 8000 Hz the report will be received at worst after 0.125ms delay. This can make 8000 Hz feel more responsive to those who are sensitive to changes in input delay/responsiveness.

All of this sounds amazing, but how beneficial is this in games? Most of the time you will not be moving your mouse fast enough to hit the limits of 1000 Hz, but you can still “feel” and “see” the improvement in smoothness, which is considered a visual benefit of 8000 Hz. To notice these visual benefits, you would need at least a 240 Hz monitor and over 240 frame rate. When you hit these conditions, you should be able to see and feel the improved smoothness and you will possibly feel that a 8000 Hz is more responsive.

Some games do not support 8000 Hz at the moment, I would say that if you play any of the popular high tier competitive games like Valorant, CS:GO, Overwatch or Quake Champions you should have no issues. The input implementation in these games is well done, and you should be not running into issues. HOWEVER, some systems currently do not seem to support 8000 Hz that well, and people have had issues even in Valorant and CS:GO. If you are experiencing these issues you will have major stuttering that will make the game unplayable, you will definitely notice this almost instantly. In these situations, you can set the mouse to use 1000hz / 2000hz / 4000hz. 4000 Hz polling rate seems to work for most people, but some have to go as low as 2000 Hz on their systems.

These issues are not necessarily caused by old systems, as they seem to be happening on newer systems as well. You can be certain that Razer is working on this, it could be a firmware issue in the mouse itself or an unseen issue with certain systems. Before the official launch of the Viper 8KHz Razer announced that they are working with Microsoft and game developers in making 8000 Hz polling friendly games.

Let’s get into the subject itself, both mice use the same Razer Optical Mouse switches. Viper 8KHz has been specified to use the “2nd gen” switches and the RVU to use the first gen switches, but Razer has updated all their flagship products that have the optical switches to use the newer generation ones. The 2nd gen switches feel very good for gaming and even general use, there is a slight difference in click feeling still to mechanical switches, and they definitely don’t feel as good as some of the premium mechanical switches.

The feet are both 100% PTFE, but the design is different. Viper 8KHz has two feet, one large at the back part of the bottom plate and one that’s quite thin at the front. The Viper Ultimate then again has 4 small feet. Both provide great glide on multiple surfaces that I have used. For example premium Artisan pads work very well with these feet, Endgame Gear MPC450, Xtrfy GP4, Aqua Control Plus and mainstream pads like the Steelseries QcK all have a solid and consistent glide.

Both are also equipped with the Razer Focus+ that is probably the best sensor on the market regarding performance. It’s got good power saving features as well, so it works very well as a wireless sensor.

Battery life on the Viper Ultimate is specified to be 70 hours with RGB disabled, I’ve had no issues running out of battery because of the awesome charging dock. I recommend spending some extra money and getting the RVU with the charging dock, it’s so easy to place the mouse to the dock every night before you turn off your PC.

8000 Hz polling rate means also that the cables will have more shielding per regulations, so the cables are going to be thicker and less flexible than the premium cables on some of the 1000 hz mice. The cable is still somewhat flexible though, but I do recommend using a mouse bungee with it.

The Razer Viper UItimate is one of the best wireless mice out there and is equipped with incredible wireless tech. Having no wire can be very beneficial for gamers who play with low sensitivities, where a cable can hinder the movements you can make. The wireless tech is also so good that you really can’t notice the difference between a Viper 8KHz that’s being used at 1000 Hz and a Viper Ultimate that’s set to use 1000 Hz.

8000 Hz polling rate for sure has its benefits if you play games that can benefit from it and if your system does not have any compatibility issues with it. It’s hard to judge how much it actually improves your in-game performance, but the increased smoothness and more responsive feeling sure feels awesome in use.

Considering the price, Viper 8KHz is the same price as the standard Viper ($80) , so it definitely does not make sense to buy the standard Viper anymore. At the time of writing this comparison, the Viper Ultimate is available on Amazon for $120 with the charging dock included. $120 is a very good price for the Ultimate, and for that price, It’s very hard to recommend the Viper 8KHz over it. The standard price for the Ultimate version is $150, which is close to double the amount of the 8KHz Viper.

If you are not bothered by cables on gaming mice, I would definitely recommend for you to get the Razer Viper 8KHz. It’s much cheaper and provides 8000 Hz polling. If your system or the game you play is not compatible with 8000 Hz, you can set the mouse to use 1000/2000/4000 Hz polling. As already mentioned, to get the full benefit from the polling rate you need a high-end system and a high refresh rate monitor. It’s likely that you won’t notice any difference to a standard 1000 Hz mouse if you are running your games with bad FPS or lower refresh rates (144hz and below). But again, Viper 8KHz is the same price as the standard Viper, so makes little to no sense to consider the standard Viper at this point, even if you don’t have a high-end PC or a high refresh rate display.

Go for the Razer Viper Ultimate if you are often bothered by the cable on your gaming mouse. Cables are often irritating especially to those who play with low sensitivities and need a lot of space to make fast turns. The charging dock increases the charging experience by a ton, you don’t have to try and remember to plug your mouse in with a Micro-USB cable every other night, you can just place the mouse on the dock when you shut down your PC.

It’s definitely one of those battles where your preferences and choices in games have a massive effect. I myself choose the Viper 8KHz over the Ultimate, as I am a high tier gamer and I always want to have the best tech on my desk.