Optical vs Laser Mouse: Which is Best for Gaming? 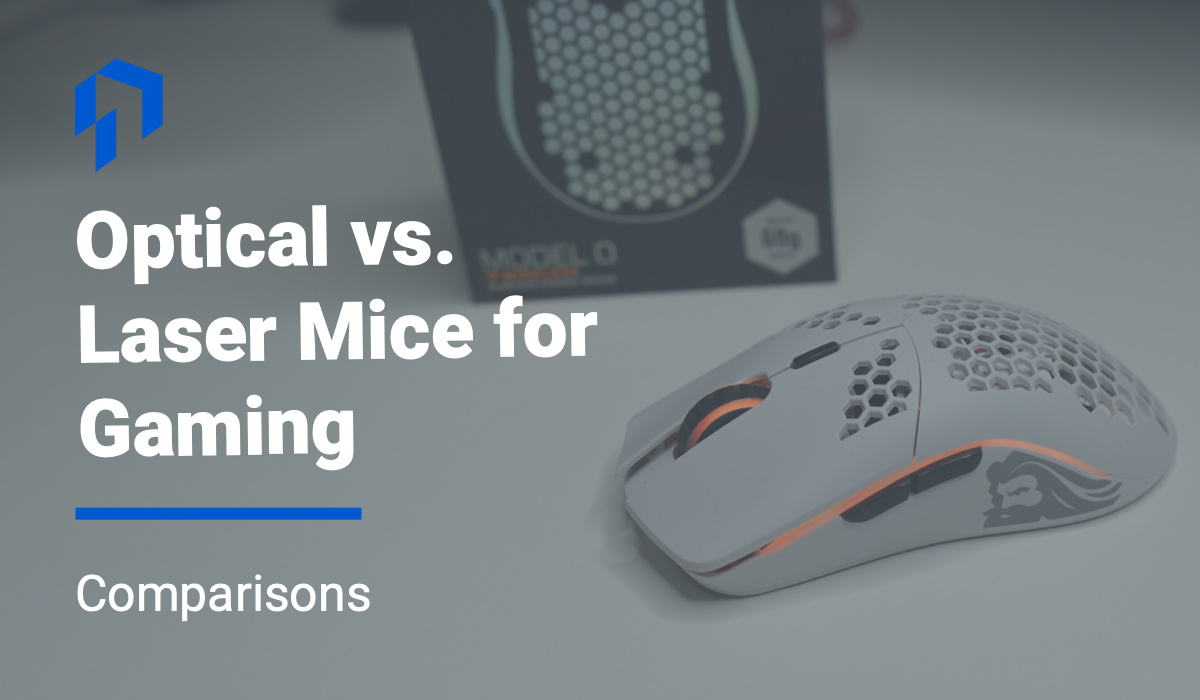 Let’s start with a question: what’s the most important computer peripheral for most gamers? For almost everyone out there – non-gamers included – the mouse is at least the top two. It is the main way that we interact with menus, trigger events in games, and more. Plus, every type of mouse out there is different. Finding the right balance can be tough, and one of the key decisions to make is optical vs laser sensors.

Mice have come a long way since computing began, and the options available to you now come in all sorts of packages. Most modern gaming mice use optical sensors, with mechanical and laser options falling to the wayside.

Common belief followed the market and now, almost every mouse out there is optic. Is it actually better? To answer that, we must discover the differences between the two types in the first place.

With modern mice, it is easier to start with what is the same before moving on to some of the differences. Optical and laser mice are extremely similar – enough that most people casually using a computer will not notice a difference between the two unless it is pointed out.

Boiled down to the absolute basics, all mice kind of work the same. Even going back to the 1990s, when rubber wheel mice were still used, it was all based on tracking light. Mechanical mice like that have fallen out of favor, and for good reason. They were much less consistent and offered a host of issues like needing to clean the sensors.

Still, they laid the groundwork for modern peripherals. Nowadays, optical and laser mice use constant imaging to detect and record the surface the mouse is on. They employ CMOS sensors – basically tiny, low-resolution cameras – to do so.

This is why mousepads are so important for gaming. Different textures appear better on the mouse’s camera, allowing for more accurate polling and tracking. Similarly, as mousepads wear down and get more scratches or divots, it affects your mouse performance.

Both optical and laser mice:

Truthfully, it sounds like a feat of modern engineering. Taking that many pictures and analyzing them in such a short amount of time is astounding, especially for something that fits in the palm of your hand.

The Effect Of Light

Now that we know both types of mice work similarly, it’s time to explore the differences. This largely comes down to how they function on different surfaces and how they illuminate textures. To explain why laser mice work better on most surfaces, we must get into illumination first.

To detect changes in the texture and move, the mouse first needs to use a light source. This comes directly from the mouse itself – if you lift a nearby mouse, you’ll see a small hole where the light comes out from on the bottom.

Optical mice use an infrared LED light as their source of light. These reflect more than the laser beam that laser mice use to achieve the same effect. This is because the LED is less powerful than the laser, so it penetrates the surface less. It is this difference in reflection that causes the difference between optical and laser mice to appear.

The simple infrared LED light used by optical mice is less powerful and more reflective than the lasers used in laser mice. Given what we’ve covered so far, you may think that the better the reflection, the better the mouse. After all, that allows more light into the image for increased accuracy.

In theory, you would be correct. However, it does not work that way in practice. If there is too much reflection – such as using the mouse on a glass surface – the light pattern is lost entirely. Suddenly the mouse cannot detect any changes in texture while moving. Optical mice work best on mousepads and non-glossy surfaces due to this.

On the other end of the spectrum, laser mice are much more powerful. Their light source penetrates far deeper into many more surfaces, making reflection a non-issue. In fact, laser mice provide their sensor with extra information. This is because the extra power of the laser covers more textures, providing additional differences between images for the sensor to detect. This sounds like a great advantage, but it also causes issues.

In an ideal human-computer interaction, the cursor moves exactly as you expect when you move your mouse. It should feel natural and not suffer from slowness or acceleration – it should stay exactly proportional. This is why every gamer out there should consider turning off mouse acceleration, a setting in Windows. However, acceleration can also occur due to the mouse itself.

Mouse acceleration happens when you quickly move your mouse, and the sensor can’t properly track the changes. It accelerates and becomes erratic to make up the difference and introduces inconsistencies with cursor movement. You can think of this as a kind of information overload, where too many details are coming through.

The more inconsistencies present, the harder it is to develop muscle memory and reliably move the cursor. This causes a significant struggle in learning plenty of games, shooters especially.

Laser mice are much more prone to acceleration and jitters because of their extra powerful laser. While this is really only an issue at high speeds, it is something that can affect play in fast-paced games.

Optical mice can also suffer from acceleration, but it is rarer. Outside of low-quality builds, it is essentially not an issue for optical models.

Everything in this category is largely reliant on the mouse manufacturer rather than optical or laser. While there are some general rules – laser mice tend to be more expensive, for example – they are nowhere close to steadfast.

Consider these to be secondary considerations that should be thought about when looking at buying a mouse. They are:

Price is self-explanatory. Gaming mice can quickly get expensive, so it’s a good idea to set a budget before getting too far. Laser mice are more expensive than their optical counterparts, but not too far out. If you’re torn between the two, consider the rest of the list first.

DPI, or “dots per inch”, represents how accurate the images your mouse takes are. Contrary to other hardware, you want low DPI for a gaming mouse to avoid information overload. The fewer the pixels in the image, the less chance there is for too much detail or reflection. Most gaming mice are available between 400 – 1800 DPI. One quick note – the lower your DPI, the slower your cursor movement. Adjust your in-game settings to make up the difference for even more accurate movement.

Polling rate can be thought of as how many pictures your mouse takes a second. Basically, it is how often your mouse alerts your computer to a positional change. The higher the polling rate, the better – it prevents acceleration from happening. A good polling rate is between 500 – 1000 Hz.

Finally, consider your mousepad surface. It’s important to use a textured, cloth mousepad for an optical mouse. Laser mice benefit more from thin, plastic-based pads that tend to be smoother as they help prevent acceleration.

For most gamers, an optical mouse is simply the more consistent choice. While laser mice have come a long way thanks to polling rates and better surfaces, they are still more prone to acceleration than optical mice. Perhaps more important than the type, however, is the hardware.

You should focus more on DPI and polling rate than the mouse type for gaming. Low DPI and high polling rate help fix the acceleration issues mentioned above for both types. Even a low-quality optical mouse can suffer, so consider adding a bit to your budget and getting a nice mouse. Get something that also feels good in your hand and looks pleasing – it will sit on your desk for a while, after all.

Looking for your next gaming mouse to dominate the competition? We’ve got you covered with plenty of guides and reviews of the most popular models: