Liquid vs Air Cooling: Which is Best for You? 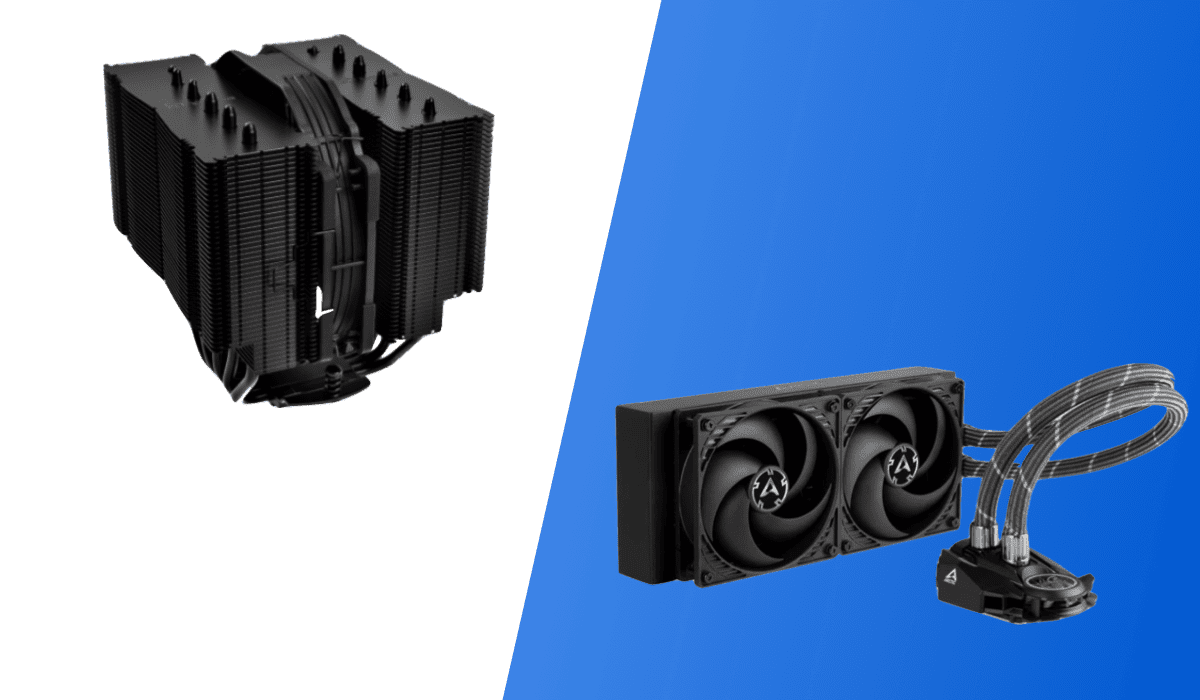 With so many different CPU coolers on the market, choosing the right one can feel like navigating a minefield. Choosing between an all-in-one liquid cooler and an air cooler is one of the first decisions to make, but it can be a time-consuming one. Knowing the main differences between each, as well as their benefits and drawbacks, should help you make an informed decision.

Ultimately, both types include builds that can efficiently cool your CPU — it comes down to choosing the correct cooler for your needs. Cooling and airflow are some of the most important and often overlooked parts of a PC build. Not only will keeping temperatures low improve your performance, but it will also help your CPU last longer and minimize harm. This is the reason why choosing a non-stock cooler is a good idea; default options can often struggle to meet the demands of gamers or power users.

Certain limits like overclocking or small cases also push the load on CPU coolers, making the choice an ever more important one. Let’s take a look at common considerations when purchasing a CPU cooler first to help make a decision. Then we’ll dive into the differences between types and where each shines.

What To Consider When Buying A CPU Cooler

As with any major computer purchase, different categories will be more important to different people. Common considerations like cost and ability are expected, but there are also some definitions that are more personal. Things like style and aesthetic, or clearance in a case, can (and should) have a profound impact on your CPU cooler choice.

These considerations apply whether you decide on an air or liquid-cooled system, although each may shine in different ways. While the main focus of any CPU cooler is, as the name suggests, to cool the CPU, some manufacturers place more focus on bells and whistles than others. If you know you want a feature like RGB lighting or multiple fan connections, that will change the importance of these categories.

CPU coolers have a wide range of prices, spanning hundreds of dollars. In general, liquid cooling is more expensive than air cooling. This is especially true for custom liquid cooling, as buying all of the different connectors, tubes, and liquids can get out of hand quickly. While higher-cost components are often made from quality materials, they may not be the best value. Consider a budget and stick to it to help make a decision.

This is a wide category, but an important one. Considerations such as how you plan to use the computer, if you are overclocking, and the fit of the cooler all matter. AMD and Intel motherboards have different CPU cooler stands, for example. While most coolers come with mounts to fit either, it is possible yours may not, changing your decision.

The most important need to consider tends to be overclocking. While some high-end and modern air cooling CPU setups can handle severe overclocking, this category is often better suited to liquid-cooled PCs. The solution simply handles high heat better.

You’ve likely seen different CPU coolers, some featuring massive fans and heatsinks. While these often make them more efficient at cooling, it also means that they take up more space in the chassis. Especially if you are building a mini-ITX or micro-ATX rig, clearance is important to consider. Most cases include information on their cooler clearance so you can ensure that everything fits together before buying it.

Coolers can also butt up against other wires or, more commonly, high RAM sticks. If your RAM features large heatsinks or fins, measure them as well. Most air-cooled options take up less space than liquid coolers, but this is not always the case. Liquid coolers also come with a radiator — consider what size your case supports and where it can go without interfering with other airflow.

The only category that doesn’t influence performance, but may be just as important as the others. As more and more cases feature tempered glass or other ways to look inside the case, style only grows in importance. While most aesthetics come down to personal opinion — the RGB debate is far from over — most people find that liquid-cooled systems look better.

This is also where all those extras like color-changing lights, white or black plastic, and more come into play. The CPU cooler is likely to take up a significant amount of eye space in your build; you should make sure you like the look of it.

Air-cooled CPUs are the classic option, found in most PCs to this day. They can vary greatly in size and depth, but always feature a fan and a heatsink. Together, these two parts work together to pull heat away from the CPU itself, and then push away the hot air into the case. At that point, the airflow in your case handles the rest.

These coolers are often in the shape of a large block thanks to the heatsink. They are made from thermo-conductive metals and pull the heat off the chip. The more thermo-conductive material there is, the more heat it can handle at once. Especially if you are interested in overclocking with an air-cooled PC, you’ll want to spring for a large heatsink. Most are made from aluminum or copper.

On top of the heatsink sits the fan, which pushes away the heat the heatsink has gathered. Some air coolers also place the fan on the side; be sure to follow the manufacturer’s recommended setup guide.

The Pros of Air Cooling

Air coolers are easy to set up, often cheaper, and a great option for the majority of PC users. If you do not plan on putting your PC under a heavy load through things like gaming, video rendering, or 3D modeling, your choice is clear. Choose a cheap air cooler and you’re all set to go.

However, this is not the only use for air coolers. They tend to be:

All of the benefits combine to make a great value-based cooling option for a PC of almost any type. It especially shines for beginners or those worried about leaks from a liquid-cooled setup. Most of the time, installing an air-cooler is as simple as placing it correctly and plugging it into the correct fan port on the motherboard.

Air coolers tend to be cheaper than liquid coolers, although high-end models do exist. If you are working with a low budget and do not plan on overclocking, almost any aftermarket air-cooled option will do.

The Cons of Air Cooling

Of course, nothing is without its drawbacks. Air-cooled systems struggle when extreme cooling is necessary, such as with overclocking or in tight systems. They are also much louder than their liquid-cooled cousins and often bulkier. With that said, they can outperform liquid cooling under some conditions.

For those that care about aesthetics and style, air coolers are simply not sleek. Due to the large heatsink requirements to actually do their job, the best ones will always bulk up. This is another con for those with limited space, as well.

In a way, you can boil down air cooling to a basic formula. It gets the job done for the vast majority of users but doesn’t really look good doing it.

Liquid coolers are a more modern way of cooling down computers. Instead of a fan connected directly to the heatsink, tubes of liquid are connected instead. The liquid carries the heat from the heatsink out to the radiator and fan section using a closed-loop system. Because the water is always moving and the radiator takes away some of the heat, temperatures can stay lower — the “surface area” where heat can be is significantly expanded.

As you might guess, these systems are more complicated. Your computer case will need to support the size of the radiator, and you’ll have to plan for the layout of the system as you build. This is especially true if you build a custom water loop rather than using an all-in-one system. For most people, the all-in-one system is a better choice — they are far easier to set up, cheaper, and offer similar performance. Plus, the risk of getting water all over your expensive computer is reduced pretty low.

The Pros of Liquid Cooling

Liquid cooling comes with a nice selection of pros for those willing to put in the extra work. The systems are sleeker and often look better, so you can ensure your PC looks the part. It offers this without compromising on performance — in fact, liquid cooling has better performance than most air-cooled systems.

This makes liquid cooling almost a requirement for serious overclocking. It also sees nice benefits in form-factor builds, assuming the case is built to support a radiator. Benefits include:

If you get serious with liquid cooling, you can even expand it to include your GPU, RAM, and even SSDs. Custom pumps and loops quickly get complicated, but there are plenty of options for consumers of every level. Modern all-in-one systems are almost as easy to set up as a traditional air cooler.

The Cons of Liquid Cooling

While manufacturers work toward making liquid cooling better, there are certainly still some cons. It is a more intimidating option for new builders, as the downsides of screwing up are huge. Especially with a custom loop system, you can ruin your entire build if not careful. This is rare, however, and most people will choose an all-in-one option.

These are also not without drawbacks. Liquid cooling tends to be more expensive than air cooling and has some maintenance associated with it. It is important to check every so often and ensure that the pipes are in good condition and the pump works effectively. Otherwise, leaking could occur and ruin the closed loop system.

You may also need to plan more for a liquid option. Ensuring that it fits in your case, your radiator is supported, and other air can still flow are important considerations that some people may not want to deal with.

Verdict — What to Choose

There is no one answer to fill everyone’s cooling needs. Those interested in an easy setup should choose an air CPU cooler. Enthusiasts pushing the limits of their components will see great benefits from a liquid CPU cooler. However, most people lie somewhere in between — this is where the previously mentioned categories become essential.

Consider your budget, available clearance, needs, and aesthetic preferences. Your experience building PCs may also come into consideration, as liquid cooling can intimidate early builders. Remember that liquid cooling has greater cooling potential, but air cooling is often cheaper and easier to set up. Look at your preferences and needs before making a final decision.

Interested in checking out some specific coolers and comparing them? We’ve got you covered. Check out our guides below to the best air coolers out there, or find a liquid cooler that will fit in your case: