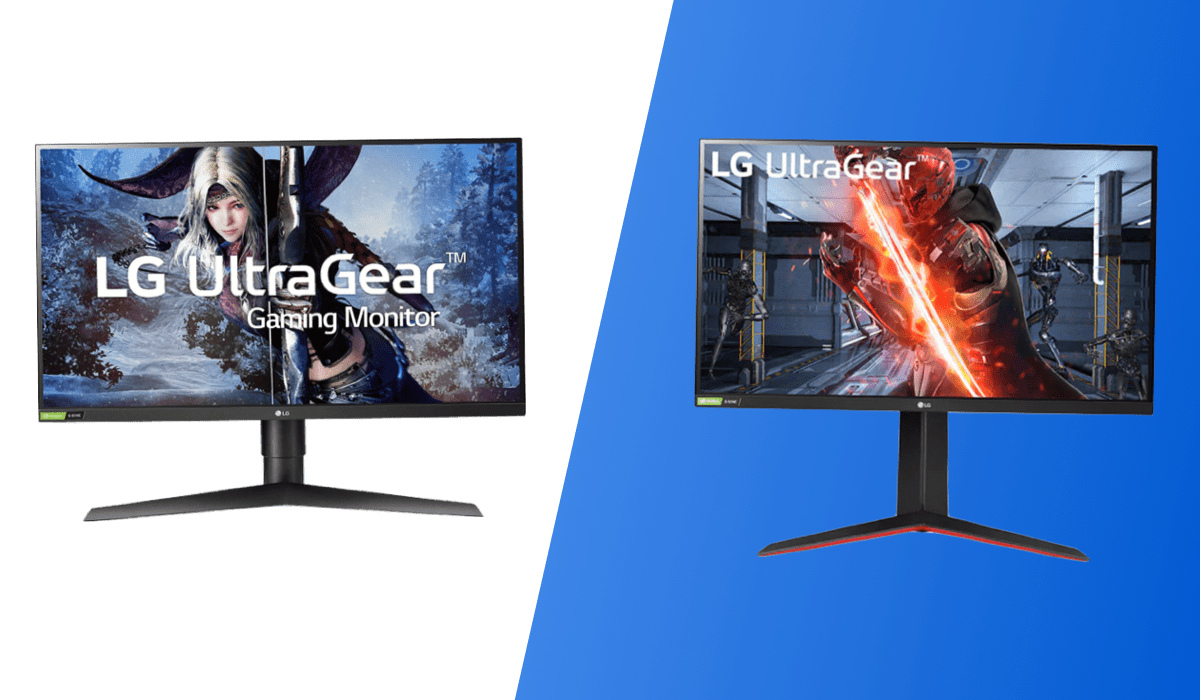 LG is one of the leading manufacturers in the gaming monitor scene, and for good reason. Their entries into the space in recent years have perfectly blended power, performance, and price, hitting right where the average consumer want them to. Two of their most popular models are the 27GL850-B and 27GN850-B – 1440p IPS panel monitors with a variety of features to boot.

The two monitors are large, 27” IPS screens with QHD resolutions. Made and marketed toward gamers, they have all the common features you could expect from a modern gaming monitor, including high refresh rate and low response time. Technically speaking, the 27GN850-B is a slightly newer offering than the 27GL850-B. However, they work best in tandem. They share a striking number of technical aspects, with the main differences between the two being in connectivity and color coverage.

One of the only issues with these monitors is sourcing one; while they are both listed and available on Amazon and other major retailers, stock tends to sell out quickly. Especially if there is any sort of sale going on, try to beat others to the punch and make your purchase if you have decided to get one. Thankfully, both monitors are reasonably priced for around $400. Let’s examine what few differences there are between these monitors to help inform your decision.

The first area where these monitors differ slightly is in appearance. While both offer the well-known, sharp-edged gamer look common among monitors, the 27GL850-B is slightly more subdued. Red accents are common throughout both monitors – the key difference is that the 27GL850-B leaves the accent color in the back.

Most differences are found only in the stands. If you plan on mounting the monitor using the included 100×100 VESA brackets, you will almost certainly not notice any difference. However, people planning on leaving the monitor on the desk should consider whether they want any red accent showing on the base.

Other than the sharp-edged stand, both monitors share a clean and simple look. Bezels are thin across the board, with an almost frameless design across all but the bottom edge. Notably, the included stand on the 27GN850-B is much thicker than the 27GL850-B. The 27GL850-B is only 6.5” thick on the stand – meanwhile, the 27GN850 is 12.7” deep.

Both monitors share a crisp QHD Wide resolution. While some may prefer a 4K option (you can see our list of some of the best 4K monitors here), the 1440p screen is still sharp and beautiful on both 27” screens. For modern gaming, this resolution is a nice compromise. While updated hardware is still required, you do not need a top-of-the-line graphics card to take advantage of the native resolution while hitting a high refresh rate.

Both the 27GL850 and 27GN850 use a Nano IPS display of equal quality. LG introduced the technology with the 27GL850. Put simply, the Nanotechnology improves the response time and image quality of IPS panels by including a layer of nanotechnology on the backlight. This reduces bleed and sharpens colors, making a noticeable difference when compared to a non-nano screen.

As expected of a modern gaming monitor, both monitors support extremely fast response times and high refresh rates. A 1ms gray-to-gray response time is standard on both panels alongside a 144Hz refresh rate. While higher refresh rate monitors are becoming more common – more 240Hz options exist now than ever before – most gamers will be more than happy with 144Hz. This is especially true given the higher 1440p resolution, where it is harder to hit consistent high frames per second.

Thanks to LG’s proprietary motion blur reduction technology, along with some other options, users also have the option to slightly alter response times. This is all done through the monitor’s on-screen menu, with both screens featuring options such as “normal”, “fast”, and “faster”. Generally, the faster modes introduce significant motion blur and are likely not worth the trade-off for most users. Regardless of mode, the response time and refresh rates are incredible on both monitors.

Contrast ratio and brightness are two categories that both monitors sadly fall short in. While the advertised ratios are respectable, plenty of real-world testing and monitor comparisons have provided some disappointing results. While the monitors are still great options, contrast is a major failing of the panel. If you work in a bright room or consistently see changing light around you, it may be best to consider other options.

Both monitors advertise a contrast ratio of 1000:1 under typical conditions with a minimum of 700:1. On paper, this category should be another tie – however, the previously mentioned tests prove the 27GN850-B to fair slightly better in this category. RTINGS conducts heavy contrast testing from black to white across a variety of monitors. In real world conditions, they found that the 27GL850-B has a native contrast ratio of 735:1 – an extraordinarily low number. The 27GN850-B faired slightly better in testing at 852:1, but still may not be enough for some users.

Some variation is expected between units, but numbers this far below advertising speak to a larger issue with the panel. IPS panels have traditionally struggled with contrast, and LG clearly focused on other specs of this screen. Do not expect great contrast performance from either.

After some necessary post calibration, these two monitors are some of the best options available for color accuracy and gamut. Out of the box, they both struggle with correctly displaying blue tints, and the provided picture modes are nothing special. With that said, most users will not have any issues with the immediate options but taking some time to properly calibrate is a good idea. With no calibration, the 27GN850-B slightly edges out the 27GL850-B.

After calibration top balance out gamma settings and color temperature, both monitors boast upwards of 99.6% sRGB color accuracy. Adobe RGB has 84.2% color accuracy on the 27GL850-B and 88.8% on the 27GN850-B as well, making both monitors perfect for people switching between gaming and content creation.

HDR support is standard on both screens and shares the same technology and color boosting technology. While this mode can cause some issues otherwise with response time and refresh rate, it is a welcome boost for watching movies or generally consuming media.

Given the slight boost it has to out-of-the-box accuracy and Adobe RGB, the 27GN850-B edges out this category. With that said, almost nobody will notice any difference between the two here – they are some of the best around.

This is a simple and clear win for the 27GL850-B, as it includes a USB hub that was cut with the newer release. Outside of these three USB ports – 2x downstream and 1x upstream – connectivity is a mirror image. Both include 2x HDMI ports and 1x DisplayPort. If USB connectivity is not a major concern of yours and prices are similar, this category becomes personal choice yet again.

The choice to leave behind a USB hub instead of expanding to include USB Type-C is a strange one but was likely done to cut down on costs. Given how similar the monitors are in almost every other category, this could become a reason why someone chooses the slightly older 27GL850 over the newer model.

Given the two monitor’s similar prices and across the board statistics, either choice is a valid one. With that said, the smaller footprint, more subdued aesthetics, and increased connectivity of the 27GL850-B make it a more versatile option for the average buyer. If there is a significant price difference between the two and you are not attached to any of the above, however, choosing the 27GN850-B can become the better option.

The biggest win the 27GN850-B has is in color accuracy, and the difference is so minor that few people are likely to notice. Especially for gamers – the primary market of these screens – all the important categories are ties. We recommend looking for a nice deal on either (or even finding one available) and pulling the trigger if connectivity is not a major concern of yours. Both retail for around $400 currently, with an MSRP of $500, making them even easier purchases.

Looking for more information on LG’s 27GL850-B? We’ve compared it to several other monitors from different manufacturers so you can get a complete picture: