Kingston A2000 vs Western Digital Blue SN550: Which is Best Value? 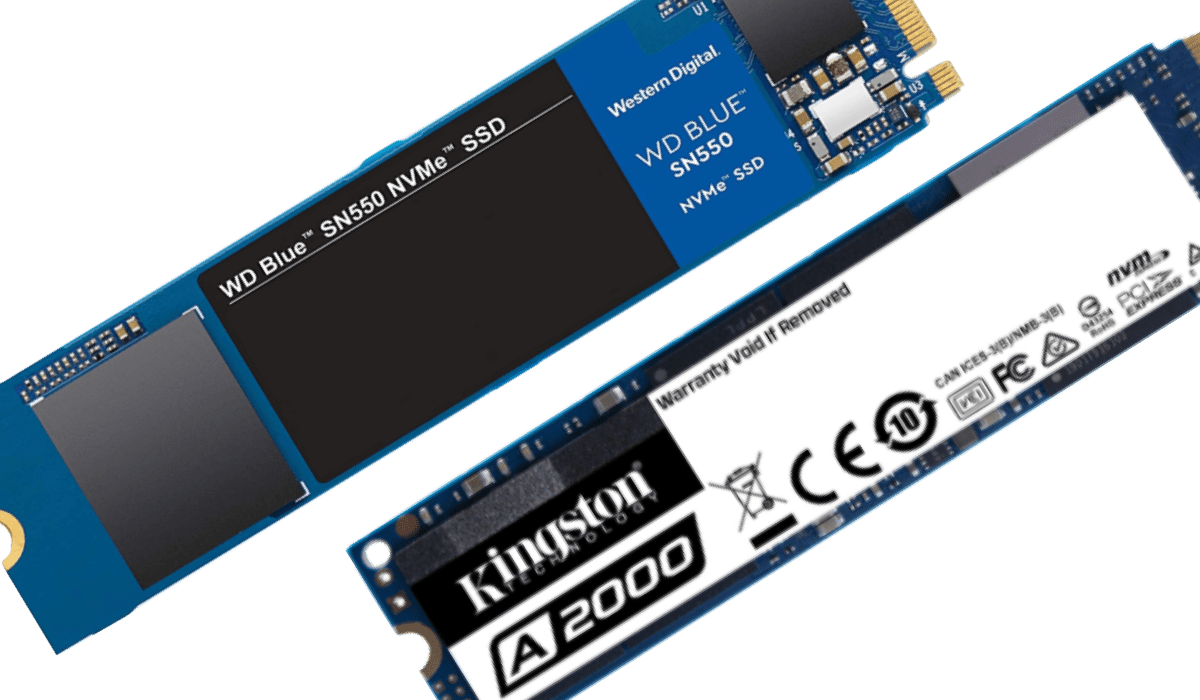 Thanks to the transition into the new generation of PCI express lanes, as well as the oversaturation of the SSD market, buying an NVMe drive to house your data has never been cheaper. Even some of the best PCIe Gen 3 M.2 SSDs can now be found at around the $100 mark; providing quick transfer speeds, quick load times, and crisp responsiveness; all at a budget price. Two such NVMe SSDs are Western Digital’s Blue SN550, and Kingston’s A2000.

Not only do these solid-state drives offer mid-level PCIe 3.0 performance, in terms of transfer speeds, but they are also reliable storage units – due mainly to their 96-layer TLC NAND flash memory – making them an excellent option for installing an operating system, large-size games, or even content creation applications. They may not reach the read and write speeds of PCIe Gen 4, or high-end PCIe Gen 3 SSDs (like the WD Black SN750 or the Samsung 970 Pro) but they still get the job done, and cost anywhere between 20% to 62% less. Given that for most users the differences with these most expensive models will hardly be noticeable is why both the WD Blue SN550 and the Kingston A2000 are smart choices for the vast majority of PC builds.

So, if you’re trying to decide which one of these two SSDs to go for – and whether or not the Kingston A2000 is worth its 17% higher asking price – then do read on, as we will analyze both the manufacturer specifications, as well as the real-world benchmarks, in order to come to a conclusion on which is the better price-to-performance unit for different modes of PC-use and applications.

Right off the bat, if you’re looking for an SSD with over 1 TB of storage, then Western Digital’s Blue SN550 is going to be your only option between the two, as the Kingston A2000 does not have a 2 TB variant.

Sequential read speeds have the WD Blue SN550 in the lead by 14% and 9%, for the 250 GB and 500 GB / 1 TB variants respectively, while the Kingston A2000 pulls ahead in sequential write speeds by 16%, 14%, and 3% – going from lower to higher in storage sizes. Larger performance gaps are found in 4KB random read and write speeds, where the WD Blue SN550 appears to outclass the Kingston A2000 significantly, pulling ahead by anywhere between 13% to 50%.

Durability wise, both SSDs offer respectably high Terabyte Written values: which are equal at the 250 GB and 1 TB storage sizes, but at 500 GB the Kingston A2000 offers an extra 50 TBW. Of course, getting through even 300 TBW would be a difficult task, as it would require one to write 100 GB a day, every day, for over eight years – something only professional users would do. All variants, of both the WD Blue SN550 and Kingston A2000, are backed by their manufacturers respective 5-year limited warranty.

Finally, in terms of prices, we see that the 250 GB units cost about the same, but the 500 GB and 1 TB models of the Kingston A2000 are more expensive than the WD Blue SN550 by 12% and 17% respectively. Whether or not the A2000 deserves to have a higher price, however, is something that only the real-world benchmarks can tell.

For the most part the two models perform similarly, with the main exception being peak 4KB random write speed, where the WD Blue SN550 leads the A2000 by a substantial 76%. When tested in reading a large video file, the WD SN550 also showed a 17% faster sequential read speed, and when tasked to complete a 50 GB copy transfer it displayed equal write speeds with the A2000, while expending 18% less energy.

Where the Kingston A2000 proves its worth, is in the game-loading benchmark – though the difference between the two SSDs is less than half a second (3% faster), so it will hardly be noticeable. Surprisingly enough, it also fared better in the PCMark 10 Full System testing (which simulates applications, ranging from browsing, to gaming, to photo and video editing), outscoring the WD Blue SN550 just barely by 24 points (1.3% higher). It did, however, fall behind in the SPECworkstation benchmarks (meant to stress-test the SSDs by simulating workstation applications), but again by just 2%.

Overall, its fair to say that both these SSDs perform on an equal level, with perhaps a small advantage going to the WD Blue SN550 due to its faster random write and sequential read speeds, as well as its better power efficiency.

So, is the Kingston A2000 worth its higher price, for the 500 GB and 1 TB versions? Definitely not. The WD Blue SN550 displays excellent value and high performance at just $55 and $100 respectively. At its current price point, the Kingston A2000 would have to compete with ADATA’s XPG SX8200 Pro, which is simply a superior SSD. Still, its 250 GB version is a solid option at its under $50 price-tag, so if you’re looking to purchase a hard drive to house your operating system, and a few essential applications, it is a safe purchase to make. For anything above 250 GB, the Western Digital Blue SN550 is the way to go between these two storage units.