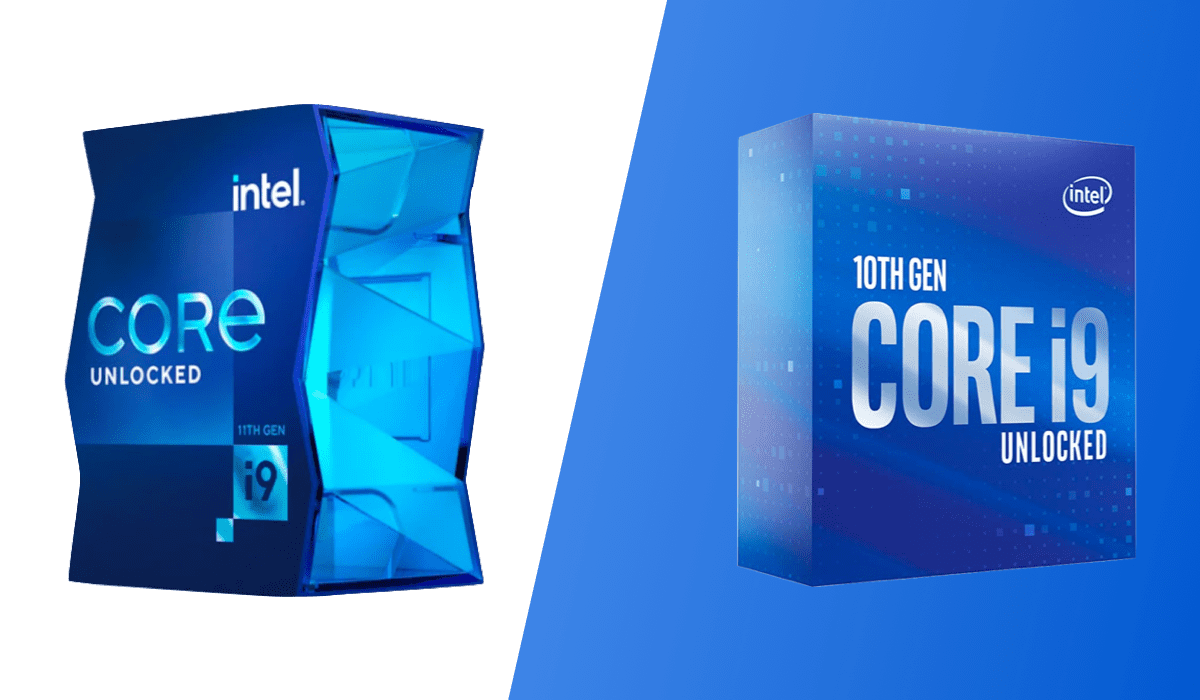 The new Core i9-11900k is the flagship model of Intel’s newest 11th generation. It touts the best speeds and most features of the new chips, but its value is questionable. With the new processors, Intel has finally caught up to AMD in terms of features. PCIe 4.0 support, higher memory speeds, and updated hyperthreading capabilities are notable upgrades. However, some things remain the same. Like previous generations, these new processors still use 14nm tech. Cores and threads have been cut in the name of optimization. This is largely thanks to Intel retrofitting 10nm design onto these chips.

On paper, the i9-11900k seems average – certainly not the strong showing that Intel usually comes with for their main processor. This is especially true in comparison to the previous Core i9-10850k. Already Intel’s best value offering for top-model seekers, it features additional cores over the newest offering. It is a poor sign for a company already struggling against AMD. Now, their flagship must compete with a previous generation.

With both chips now readily available and on the market, it’s time to compare specifications and benchmarks to see if the new chip is worth the much higher price point.

The Core i9-11900k is the flagship model of the 11th generation but has taken an odd step back in some ways. With Intel’s push to retrofit their 10nm processors to 14nm for Comet Lake, they had to make some cuts – namely to cores. The new i9-11900k has eight cores and 16 threads, a decrease from the previous generation. Clock speeds have also moved around; the chip has a 3.5 GHz base speed and a higher single-core boost of 5.3 GHz. These numbers are average, if not a bit low, for the chip’s MSRP. However, the downsides may be offset by Intel’s focus on optimization.

The 14nm architecture continues into yet another generation. Intel has taken the opportunity to boost up speeds and efficiency in several ways. The newest addition is Adaptive Boost Technology, a feature meant to increase raw speed through increased power consumption. It only activates when three or more cores are in use but should provide a nice boost to the processor.

This stacks on top of Intel’s other boosting technologies present in previous generations, providing speeds higher than what may immediately come to mind. However, efficiency does pay a price. The Core i9-11900k has a TDP of 120 Watts, and across multiple tests draws tremendous power. Especially when compared to AMD’s offerings, thermal efficiency is an issue on this chip. It also doesn’t include a stock cooler.

The newest generation increases official memory speed support to DDR4 3200. A nice bump to memory bandwidth up to 50 GB/s is another upgrade. PCIe 4.0 support also hits this processor, upping transfer speeds to 16 Gb/s – double that of PCIe 3.0. While not essential for newer graphics cards, it is a welcome upgrade for the future.

As the flagship for the next generation, this processor is a bit of a letdown on paper. Specs largely downgrade, and the price has only increased. The chip MSRPs for $539, and low availability is already driving that upwards. Benchmark comparisons will help determine how performance has changed, but Intel’s attempt to present the best processor on the market has seemingly failed.

While not the flagship of Intel’s 10th generation, the Core i9-10850k is one of the better value products that Intel has released in recent years. For many programs, it is equivalent to the Core i9-10900k – and in others, only a minor step down. Already priced competitively, the i9-10850k may become an even better option with the release of the 11th generation.

The Core i9-10850k features excellent performance across almost all programs, making it a great choice for both workstations and gaming rigs. On paper, specifications suggest that it at least keeps up with the Core i9-11900k. It has ten cores and 20 threads operating at similar speeds to the 11th generation offering. Its base clock is 3.6 GHz, and single-core boost jumps performance to 5.2 GHz. The extra cores will likely play a significant role in multi-core performance, and clock speeds between the two processors are close enough to make single-core performance negligible.

PCIe technology on this chip is beginning to age; while the 11th generation supports PCIe 4.0, this processor is stuck on PCIe 3.0 tech. While not an issue for supporting graphics cards, those looking for bleeding-edge SSDs and other additions may want to spring for an upgrade. The TDP and general thermal performance of the i9-10850k are also poor. Across most testing, temperatures easily get hot as power draw increases, causing throttling. Good cooling is essential.

The low retail price of this processor is a strong reason to consider one. It’s currently available for around $390, placing it almost $150 cheaper than the new generation i9 with similar specifications.

Early benchmarks of Intel’s 11th generation are now easy to find, providing ample opportunity to rate these processors. Sadly, the new i9-11900k has largely under performed. Most workstation owners would be better served by AMD’s Ryzen 5900x. Meanwhile, most gamers could have a much more optimized rig by getting a cheaper processor and putting the extra cash toward a better graphics card. Benchmark performance puts the 11th generation Core i9 in a weird place – and it only gets worse when compared to the i9-10850k.

The 10th generation i9-10850k has tested well across several benchmarks. While it is still not a strong showing against AMD’s most powerful options, it is a good contender. This has only grown truer as the price continues to go down. Builders interested in better multi-core support will likely find the i9-10850k a better choice thanks to the increased core and thread count. The chip’s single core performance is also admirable across multiple benchmarks.

A few different benchmarks have tested the Core i9-11900k against the i9-10850k. For additional details comparing these two processors, check out our article considering the i9-11900k’s place in the market. Using similar rigs and GPUs, the results are not entirely shocking. In Cinebench R20, the last generation 10850k outperformed the 11900k in multi-core scores. This was to the tune of roughly 100 points, with the 10th generation i9 scoring 5994, and the 11th generation getting 5860. This is likely thanks to the two additional cores. Single-core speeds favored the i9-11900k. Here, it scored 624 points while the 10th generation scored 516.

Gaming benchmarks show more similar results. In Call of Duty: Warzone, playing on 1080p with High settings, the processors were almost the same. The maximum FPS of both was 233. The i9-10850K averaged 203 FPS, while the newer i9-11900k averaged one less at 202 FPS. Results were similar in Doom Eternal – too close to justify the increased price of the 11th generation.

The Core i9-11900k did take a noticeable lead in a few benchmarks. In Microsoft Flight Simulator 2020, the 11900k averaged 61 FPS in 1080p on High settings. The i9-10850k averaged just 54 FPS. While that might be a slight bump in the new flagship’s way, the 10850k also managed to take a lead in a few tests. In both Red Dead Redemption 2 and Rainbow Six Siege on High 1080p settings, the 10850k blew the 11900k out of the water. It averaged an extra 20 FPS more on Rainbow Six, and about 10 FPS more in Red Dead Redemption 2. While not incredible amounts, it is a bad sign for a new flagship to be beaten at all by a previous generation.

As prices on previous generations continue to decrease, the value ratio for the 10th generation Core i9-10850k is getting harder to Intel to beat. Scores across both processors are too similar for most consumers to notice a difference. Meanwhile, price differences are likely to only increase. Intel’s main concerns persist; AMD’s offerings for top-of-the-line CPUs continue to win. Power consumption and heat can get out of hand on both i9 processors. However, the i9-10850k cuts through these downsides with great performance and improving pricing.

The two processors are wildly similar when put to the test, even if there are some major discrepancies in on-paper specifications. This is great news for an Intel-focused consumer, but bad news for the company itself. There is little reason to choose the new Core i9-11900k over the previous generation Core i9-10850k – and still almost no reason to choose Intel over AMD.

The underwhelming showing of the i9-11900k is a sort of gasping breath for Intel. As AMD continues to perform better in the CPU space, Intel clings to outdated architecture. For the 11th generation, it seems that has truly come back to haunt them. For most users, an i9 used to be overkill – now, it is a waste of money. Almost everyone would be better served buying a 10th generation i9-10850k for much cheaper. It still grants access to high-level performance and Intel’s brand while opening the budget for meaningful improvements elsewhere.

Want to learn more about the Intel Core i9-10850k? Check out our guides to building with it here. Or compare it to other offerings: