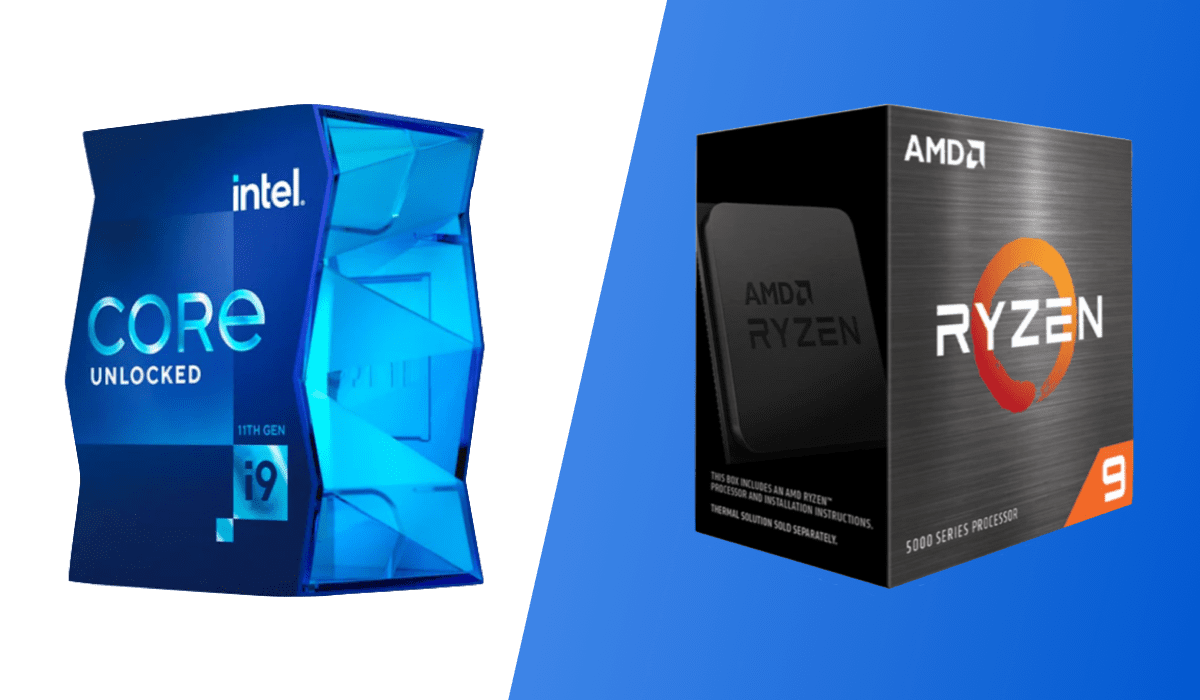 It is no question that both AMD’s Ryzen 9 5950X and Intel’s brand-new Rocket Lake i9-11900K deliver uncompromising speeds that lead to stellar performance in gaming as well as intense workstation tasks. These two processors are the absolute best that the average consumer can get their hands on with the current generation of CPUs. Those looking for more modest and affordable CPUs can check out the other options in both company’s lineups like the i5-11600K or the Ryzen 5 5600X.

Here is a battle between two giants. Intel’s i9-11900K seeks to compete with the Ryzen 7 5800X, Ryzen 9 5900X, and Ryzen 9 5950X by nestling itself at a price point that falls between the three Team Red options. But the big question today is how does the top-of-the-line Intel i9-11900K CPU stack up against the powerhouse Ryzen 9 5950X CPU from AMD?

The i9-11900K was built using a 14nm node infrastructure that was refreshed from Intel’s previous Cypress Cove line of CPUs. It is undoubtedly a fast chip with 6 cores and 12 threads, which is a figure that would have dominated the previous generation CPU market. Unfortunately for Intel, AMD’s Ryzen 9 5950X exists and crushes the i9-11900K in this metric. The denser 7nm node infrastructure of the new AMD chips allows for even more power to be packed into these processors.

The Ryzen 9 5950X has a staggering 16 cores and 32 threads, doubling the count of the i9-11900K and leaving it in the dust. Intel can’t hope to compete in the multi-thread performance metrics, so they are banking on the i9-11900K being a well-oiled single-thread machine when it comes to gaming. While the single-thread of this CPU is impressive, it falls within a similar

Speed is where the I9-11900K shines. Intel is truly pushing every single core that this CPU has to its absolute limits with a base speed of 3.5GHz and boost clocks upwards of 5.3GHz. The overclocking madness doesn’t end there. Much like AMD’s single and multi-core boost tweaking, Intel has packed these chips with a feature called Adaptive Boost Technology (ADT). This technology allows for all cores to boost upwards to 4.8GHz simultaneously. However, great power comes at an even greater cost.

The i9-11900K devours power when boost clocking, far exceeding its base TDP of 125W and ascending to new levels at a peak of 250W. The significance here is that those running lower wattage power supplies or trying to build an SFF PC with heat in mind may shy away from this CPU. On the Team Red side of things, you’re getting 3.4GHz base speeds with overclocking speeds of 4.9GHz. While the CPU doesn’t reach the same staggering heights as the i9-11900K, it draws significantly less power at 105W base and 125W at peak performance. While the i9-11900K inches ahead with peak speeds, the more consistent 4.9GHz from the Ryzen 9 5950X while drawing far less power gives it the win.

While AMD’s Ryzen 9 5950X may blast ahead with cores and clock speeds, the i9-11900K has included graphics that make it usable out of the box without an external GPU. Now, the use case is narrow for integrated graphics at this level of enthusiast performance. Most buying the i9-11900K are likely going to run it with an external graphics card, perhaps even one of the new Nvidia 3000 series if they can find one in stock. The included UHD Graphics 750 were previously seen in Intel’s Tiger Lake generation of processors, and these graphics can handle very light gaming tasks. The included graphics aren’t a substitute for a dedicated GPU for those who plan to play AAA titles at high frame rates.

Meanwhile, of course, AMD’s Ryzen 9 5950X continues the trend from Team Red of not including any sort of integrated graphics. Not that I’m quite sure where they’d fit those in with all of their cores taking up space. At this level of performance, neither company includes a stock cooler. An out-of-box cooler simply could not hope to handle that much heat, so consumers will have to procure one before assembling their dream PC.

When purchasing components of this tier, memory performance becomes even more vital to gaining those performance boosts in rendering, frame rates, and other intensive tasks. The i9-11900K uses Intel’s new Optane Memory that allows for quicker reads between the CPU and the L3 cache, as well as between your CPU and other forms of memory such as RAM. Much like the core design of these chips, Intel is pushing the limits of their design with this memory. The i9-11900K only includes 16MB of DDR4 L3 cache at a rate of 3200MHz. It’s lightning-fast memory, that’s for sure. For all of the things that Intel can make work with this Optane Memory, they can’t make more of it appear out of thin air.

More is better, in this case. And the Ryzen 9 5950X has heaps of it. This CPU comes packed with an eye-watering 64MB of dual-channel DDR4-3200MHz. With 4 times the memory pool of the i9-11900K, AMD walks away with an easy victory over Team Blue’s flagship CPU. This larger pool allows for faster performance in multi-thread tasks where short-term information needs to be stored and quickly retrieved. Simply having more of it beats out Intel’s attempt at maximizing the 16MB pool their processor has.

Intel’s i9-11900K may be looking rough after a few rounds in the ring with the Ryzen 59050X, but Team Blue is back in this match with its very affordable price point. The i9-11900K just launched and is retailing for just $539. This MSRP places the CPU below the Ryzen 9 5900X at $549 and the Ryzen 9 5950X at the sky-high price of $799. The Intel CPU certainly has less power and performance than the Ryzen 9 5950X, but it swoops in at an affordable price point that many budget-orientated enthusiasts will be happy with.

Builders looking for even more of a deal can find surprisingly close performance to the i9-11900K by going a step down to the i7-11700K for just $399.

Both CPUs offer competitive features and performance. The Intel Core i9-11900K has an attractive price point and boasts quality performance-per-dollar. However, AMD’s Ryzen 9 5950X is by far the king of this comparison. While it may sit at a steep price point, it exceeds in metrics that the Rocket Lake generation of CPUs can’t come close to matching. With far more cores/threads, more consistent clock speeds, and far less power draw makes this CPU an attractive choice for enthusiasts wanting to build the ultimate gaming machine or workstation.

Consumers looking to get their hands on the Ryzen 9 5950X will need top-of-the-line components to go along with it. Check out some of our guides for the best motherboards, coolers, and graphics cards to pair up with the Ryzen 9 5950X to get the most out of this powerhouse of a CPU.