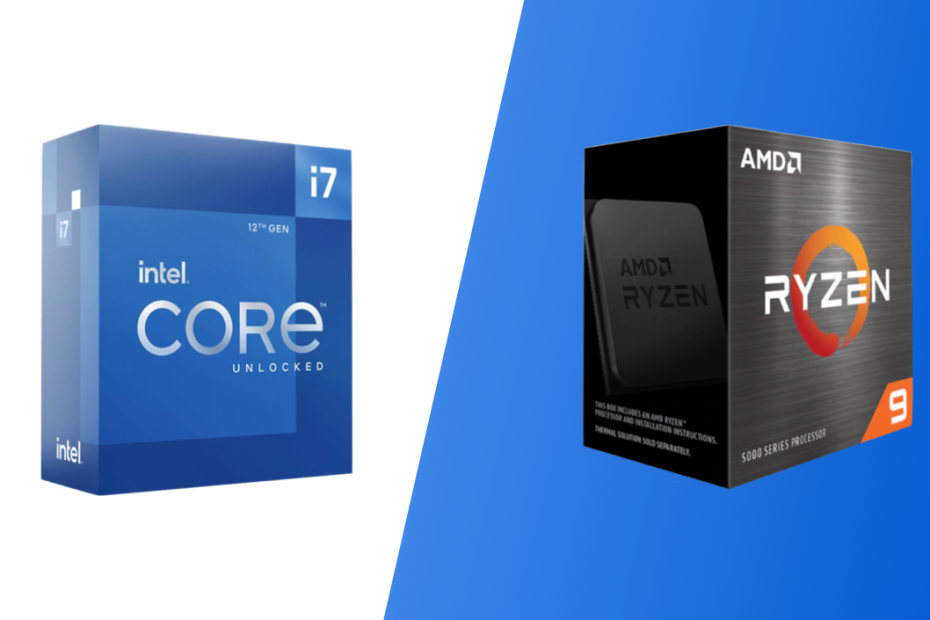 If you’re looking to put together a new gaming build with a mid-to-high-range budget right now, you might find yourself a little handicapped by market shortages and overpriced GPUs. With that said, the selection of decent processors on offer is better than ever. Today, we’re going to look at a couple of the more performance-oriented chips on offer from Intel and AMD.

The i7-12700K, being the most powerful i7 chip on the market, combines relative affordability with a feature-set worthy of any significantly-powered build. Being part of the Alder Lake line, it brings with it some impressive features; compatibility with all of the latest instruction sets (SSE4.1, SSE4.2, AVX, AVX2, and FMA3 among others), as well as support for DDR5-4800/DDR4-3200 memory. With that said, DDR5 shortages in the marketplace mean that you’re lucky if you can get your hands on it at any price right now.

The Ryzen 9 5900x, on the other hand, also packs a significant punch of its own. Part of the Zen 3 (4th generation) chips of AMD’s Ryzen line, this seemingly-modest processor has a higher number of threads, and a slightly higher base clock. However, it does suffer from fractionally lower benchmark performance and a slightly higher price tag.

The 5900x also has support for some of the Zen 3 range’s innovative features, including updates to the Core Complexes and Core Complex Die (meaning a much-improved L3 cache of 32 MB). AMD’s suspiciously-named Infinity Fabric allows for communications between complexes at very-respectable speeds, but – as James pointed out in his comparison of the Ryzen 5 5600X and the Ryzen 7 3700X – this inherently involves some kind of latency.

With both processors available for reasonable prices (for the time being, at least), we decided to pit them against one-another to see which is best. We’ll look at the features, performance, and availability of both to help you decide what route to go.

The differences between Intel and AMD’s offerings are becoming increasingly stark; perhaps not just in terms of performance for the end user, but also as far as the approach to achieving that performance goes. The 5900X offers 20% more threads than the i7-12700K, an L3 Cache that’s more than double that of its main competitor, and has a lower TDP.

On the other hand, the i7-12700K has a better boost clock speed (although, only slightly), and better PCIe compatibility. On the surface, the AMD might appear to be the clear winner; but don’t forget that it relies on a CCX architecture, meaning that its cores are slightly inhibited in terms of the ability to transfer information between themselves as quickly as possible. The 12700K, in contrast, has the same number of cores without any arbitrary loss of efficiency in communicating data.

However, when you look at the specifications alone, it’s hard to deny that the 5900X offers the more immediately-appealing feature set.

The reality of the current chip shortage means that you’ll be lucky to find any in-demand processor at RRP or lower. Somewhat surprisingly, though, you can find both of these options in limited quantities on Amazon for prices which aren’t too exorbitant.

As with other ‘K’ chips offered by Intel, the 12700K comes with no cooler and this would need to be factored into your budget. If you happen to have a slightly older heatsink, it’s absolutely worth looking into the LGA 1170 mounting kits being provided by several manufacturers. Arctic, for example, are running a programme to provide free kits to verified owners of 1170 chips.

Unlike the older Zen 2 chips, AMD are no longer offering the Wraith Prism with either the Ryzen 7 or Ryzen 9 processors. We’re sure that the company had many considerations to take into account in making this decision; it’s easy to assume, though, that two of the most prominent factors included increased manufacturing costs in the current climate, as well as the price of shipping. As with the LGA 1170, manufacturers including be quiet and Noctua are offering their own programmes to provide mounting kids (either for free, or for a small charge).

In terms of which chip is better when it comes to price and availability, both have their drawbacks due to a variety of factors. However, the 12700K  is still readily available at a slightly cheaper price than its AMD counterpart, and so we’d go with Intel this time.

With both options offering their own unique perks, it’s hard to pick a clear winner in terms of included features.

While the Ryzen 5900X’s Smart Access Memory allows for much more efficient processing of memory allocation to the CPU and GPU, it will really only make a difference if you plan to invest in a compatible GPU. If you do, though, you can expect to see a very noticeable boost in performance (Trusted Reviews puts this number at around 16%).

The 12700k, on the other hand, doesn’t have nearly as many flashy proprietary features. Being that Intel have been iterating on their i7 line of chips for far longer, this probably isn’t a surprise. As you’ll see in the benchmarks section, though, the core processing ability of the processor outshines its main rival in almost every aspect.

However – as with their Core i5 models this generation – Intel has slashed the number of “efficient cores” in half (it was eight, now it’s four). As far as the “performance cores” go, it still has eight (it’s younger sibling, the 12600K, only has six). Even with this taken into account, it doesn’t seem to have any negative impact on the 12700K.

Again, while – in totality – the 5900X might not end up being the best in terms of raw performance power, it’s hard to deny that the number of interesting new features available with the Ryzen 3 line have little competition compared to the more conventional i7 CPU.

As stated above, neither of these CPUs arrive with a heatsink out of the box. When looking at prospective cooling solutions, it’s worth bearing in mind that the i7-12700K has a TDP of 125W, which is around 24% higher than that of the 5900X. Even though this could lead to a slight impact on your electric bill, the next section might make it clear where all that extra juice is going.

There’s no ambiguity when it comes to our preferred option in terms of power consumption; the 5900X warrants serious consideration if saving electricity is one of your main concerns in putting together a new machine.

Unlike its opponent, the 12700K is equipped with its own integrated graphics chip. Slightly higher-clocked than the 11th generation’s iGPU (the UHD 750), the UHD 770 could possibly tide one over until graphics card availability picks up a little. Youtube user Benchmark Labs uploaded a video benchmark comparing it not only to the 750, but also to the Vega 11 (found in some of the Ryzen models with the “G” suffix). While it’s undeniable that the 770 provides a significant boost in average FPS compared to the previous iteration, the Vega 11 is still hands-down the best iGPU you can buy today.

Somewhat disappointingly, though, the 5900 offers no variant with integrated graphics (the closest model which does would be the 5800G, which appears significantly harder to locate right now than the even lower-powered 5700G).

When comparing both products as processing options for a new build, there’s very little ambiguity when it comes to deciding which is the better choice; Forbes provided a fairly comprehensive list of benchmarks that looks at single and multi-threaded operations (including content production and gaming), and the 12700K beats out the 5900X almost every step of the way. Even when both units are overclocked, the improvement seems to scale proportionally across both chips (meaning that the 12700K’s base clock performance – when it beats the 5900X – maintains a comparable lead after overclocking).

The only task where the 5900X excels (and, even then, only ever so slightly) is H.264 encoding in Handbrake. There, Forbes’ tests showed a score of 954,762 compared to 948,267 (a marginal .6% increase). When carrying out the same tasks overclocked, though, it’s Intel who take the dub again.

As noted above, the sheer performance offered by the 12700K is on another level compared to the 5900X. If power is what you desire, we’d have a hard time recommending against it.

We have absolutely no problem recommending AMD’s fantastic Ryzen processors when the performance of the chip justifies it. For a workbench machine, it will do just fine (especially if you’re using it to complete tasks that scale well across multiple cores e.g. encoding in handbrake).

And, for those of you who don’t have the cash to shell out on the latest i7 (or, gasp, i9) chip, their lower-end options are incredibly appealing (especially if you’d rather stick with integrated graphics on their APU products than pay extortionate amounts for a GPU on eBay).

Likewise, if you’re already running a machine with an AM4 CPU and just want to upgrade, the 5900X is definitely a great choice. Owners of the 5600 models could definitely do worse than doubling their core and thread counts.

However, if you’re looking to build a brand-new system – or you’re interested in a build which is primarily going to be used for gaming – we believe that the 12700K is the far more cost-effective solution. With a lower RRP, significantly more impressive benchmarks, and the option to use a mounting kit to combine it with a slightly older motherboard (allowing you to save a few bucks, at least), there really is no reason not to pick one up.

If you were to combine the 5900X with a capable graphics card, though, you’d still be able to get very satisfactory performance out of any game released in the next few years.

Some of you may be intending to build a PC for more general purposes, and we’d still recommend the i7-12700K, purely based on the fact that it’s slightly more affordable and fairly easy to procure. If the supply tides were to change, however, the 5900X would not be a bad choice at all for a machine designed to do a lot of things well (but not necessarily to perform any one task spectacularly).

Even when you take the somewhat-gimmicky features of the Ryzen into account (for example, Smart Access Memory), you’re really only going to see them factor into your experience if you’re willing to invest even more into your system (and, probably, having to pay aftermarket GPU prices along the way).

Intel focused on implementing features which will become increasingly important as time goes by, and which will help you to get an extra few years out any build with this processor. With the money you save from purchasing a 12700K, you could easily sit around a few months and wait for DDR5 ram to really hit the market.

While AMD do appear to have slightly dropped the ball with their latest Ryzen offerings, we would be extremely hard-pressed to ever call them lacklustre. The reality of the situation is that you’re just not going to see the best performance available when compared to its main competitor in that tier.

The question, though, is why you’d want to spend an extra fifty bucks for the less-powerful solution?