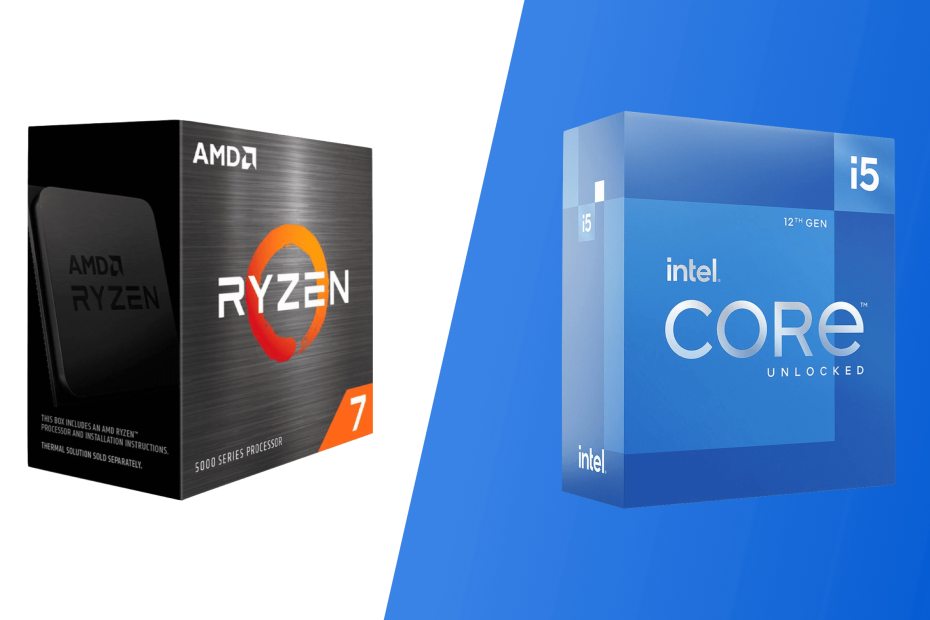 So, you think you want to build a decent PC?

Well, you probably do, especially if you’re reading this article.

However, what might not be so clear is whether you should build a Ryzen-based rig or use one of the more recently-released Intel chips. With the new Zen 4 chips not due out until the second half of 2022, the latest offerings from AMD have now been on the market for well over a year.

With that said, they still pack some punch. Today, we’re going to see how the i5-12600K, which is around a year younger than its counterpart, stacks up against the Ryzen 7 5800X.

We’ll be comparing the specs, affordability, feature set, power consumption, and the benchmark results of both chips, before making a recommendation which will hopefully make it clear exactly where you should be putting your cash.

The 12600K has ten cores and sixteen threads, while the 5800X has around 20% fewer cores (eight) and the same number of threads (sixteen). Working in AMD’s favour, though, is the fact that it does have a smaller processor manufacturing node, meaning that there is a shorter distance between transistors (7nm, as opposed to the 10nm distance on Intel’s new chips).

The 5800X also has a significantly larger L3 Cache, and lower TDP. This is all good news for the Ryzen line, but Intel – having the newer product on the market – have made the wise decision to include support for DDR5 and LPDDR5 in their Alder Lake range. And, while the 12600K definitely draws more power between these two, it also is capable of a higher boost clock speed.

Verdict: Despite all of the good intentions of AMD to make a much more energy-efficient chip here, the fact that Intel have the more powerful product (on paper, at least), and have included support for the next generation of memory, makes it hard to justify picking the 5800X (except, maybe, for gamers particularly concerned about their ecological footprint).

The 12600K, as with most of Intel’s processors right now, is only available on Amazon via third-party sellers. When we last checked, the cheapest you’ll be able to find it for is $349, which is around 16% higher than its list price.

The 5800X paints a much more appealing picture for buyers, being readily available at a discount of just over 21% ($427.99). Also working in the favour of this Ryzen chip is the fact that it will be compatible with many older motherboards (those with AM4 sockets), while anyone picking up an Alder Lake CPU will also find themselves an extra couple of hundred dollars down due to the need for a new LGA 1700 board.

Verdict: The fact that buying a 12600K means having to deal with scalpers is off-putting. Having to buy a brand-new motherboard with it will only compound that. On the other hand, the 5800X could actually save you a significant amount of cash, especially if you already have an AM4 mobo. So, if money is a serious factor you need to consider, go with the 5800X.

The 12600k belongs to the Alder Lake line, which brings with it some very interesting new features. Perhaps the most notable of these is the Golden Cove architecture, which has been designed from scratch and combines two different types of cores (“Performance Cores” and “Efficiency Cores”). In theory, this allows for better scaling in power-consumption according to how the PC is being used.

Additionally, DDR5 and LPDDR5 compatibility provide a significant head start for Intel’s offering. AMD have now announced that their AM5 chips will support the next generation of memory, but their release has now been put back to at least “2H 2022” (so expect them in the summer at the earliest).

And, as with the other chips in their ‘K’ range, the 12600K comes with an integrated GPU (the UHD 770). While it’s modest – much more modest than a good dedicated GPU, and significantly lower-powered than the iGPUs of the Ryzen’s ‘G’ series – it does provide a fall-back option that the 5800X does not. If you do choose to rely on the 770 while shopping for a more powerful graphics card, we’d advise you to temper your expectations; it’s absolutely fine for Rocket League and other eSports games, but it’s not going to provide impressive visual results by most measures.

The 5800X, being part of Ryzen’s newest generation of chips, has a much less eye-catching list of features this time around. However, one of the most talked about inclusions on this chip is the entirely new architecture design which takes the emphasis off of the Infinity Fabric. This is due to the Core Complex Dies (CCD) now being able to hold eight cores rather than four; consequently, AMD have significantly lowered the need for IF as each of the eight cores can access the 20MB L3 Cache without any inherent latency. Their higher-end chips still support IF (for example, on 12-core chipsets), but there’s no need for one in this case.

Verdict: Intel have really outdone themselves with their latest generation of chips. By taking a much more forward-thinking approach, their support for PCIe 5.0, DDR5, and LPDDR5 has given them the much stronger feature-set on paper. If your main concern is whether or not your CPU can support the latest technologies, it’s hard to recommend against the 12600K.

One of the most interesting shifts Intel have made is to redefine the power consumption of their Alder Lake processors. Rather than using the TDP definition, they’ve now moved to two separate terms; the first is PBP (which stands for “Processor Base Power”), and the other is MTP (“Maximum Turbo Power”). What they have kept fairly quiet is that these chips can scale up their power toward the MTP without the user really being aware of it.

Verdict: Again, AMD have always done a good job of making their chips power efficient. With the latest Ryzen line, this has continued to be the case, and the 5800X is capable of providing staggering gaming performance while using significantly less juice than its competitor. Definitely worthy of consideration for any eco-minded gamers out there.

To get the best possible understanding of how these two chips stack up against each other, we’ll be pulling the benchmarking results from several different sources. These should help us to not only understand which chip has better processing capabilities on paper, but also how that actually carries through into real-world usage.

The first source we’ll look at will be UserBenchmark, which attempts to compute and analyse “millions of benchmarks”. Their results tend to be good for getting a rough overview of what to actually expect from these chips.

Based on their generated report, the 12600K appears to be the vastly superior product. It outshines the AMD in just about any area most gamers are likely to be concerned with; things like faster single, dual, quad, and octa-core speeds (whether at base clock or overclocked). The 5800X, on the other hand, has slightly better memory latency and looks to be more energy efficient.

Thankfully, we can also get some actual game-performance scores, thanks to Tom’s Hardware. Their comparison of the two CPUs (as well as the 5900X) allows us to see exactly how they each handle some of the most demanding titles on the market today.

One of the most startling gaming tests was their comparison of both chips while running Microsoft’s Flight Simulator at 1080P and Ultra settings. In that matchup, the 12600K with DDR4 pulled a very impressive average of 143 FPS. Switch that memory to DDR5, though, and there is a somewhat severe reduction of just under 19 FPS. The 5800X sits more-or-less right between them, with 135.6 FPS on average.

With results like these, it’s a good idea to bring in a third set of benchmarking results. For that, we looked at CPU Monkey, which looks at the results of benchmarking utilities like Cinebench and Geekbench, allowing readers to easily compare them.

In almost every single Cinebench test, the victory went to the 12600K. Sometimes this was by a fairly narrow margin (like 1% with Cinebench R15), while it grew to as large as 15% in others (R23 Single-Core, R23 Multi-Core, and R20 Multi-Core). The one W for the 5800X was the Cinebench R15 Multi-Core test (where it was the better-performing chip by 1%).

Verdict: It was very surprising to look at these results. Based on Cinebench, Geekbench, and User Benchmark scores, you could hardly be blamed for expecting the 12600K to be the superior CPU. However, it looks like the 5800X has genuinely better real-world performance, despite being limited to DDR4 memory.

Consumers looking to put together a workbench machine should look no further than the 12600K. The Cinebench and Geekbench scores alone were enough to settle our minds in this regard, and the fact that this chip can also support the latest and greatest technologies is just another reason to invest in it. It might be more expensive initially, but we have a feeling that its longevity is going to make it a worthwhile investment.

For gamers, both of these chips will do a great job. However, the clear winner is absolutely the 12600K. While some of its wins over the 5800X were a little marginal, we feel that future titles are going to make much better use of DDR5 and PCIe 5.0 technology. Again, the initial overheads of getting set up with the processor are going to be higher, but we have a feeling that it’s going to be well worth it if it means you can get an extra year or two out of your machine.

If you’re only looking for a general use machine, we’d recommend going with the 5800X. It’s still going to churn out impressive performance during heavy multimedia editing work and gaming, and the cost (especially when you factor in the more affordable motherboards) make it an absolute no-brainer.