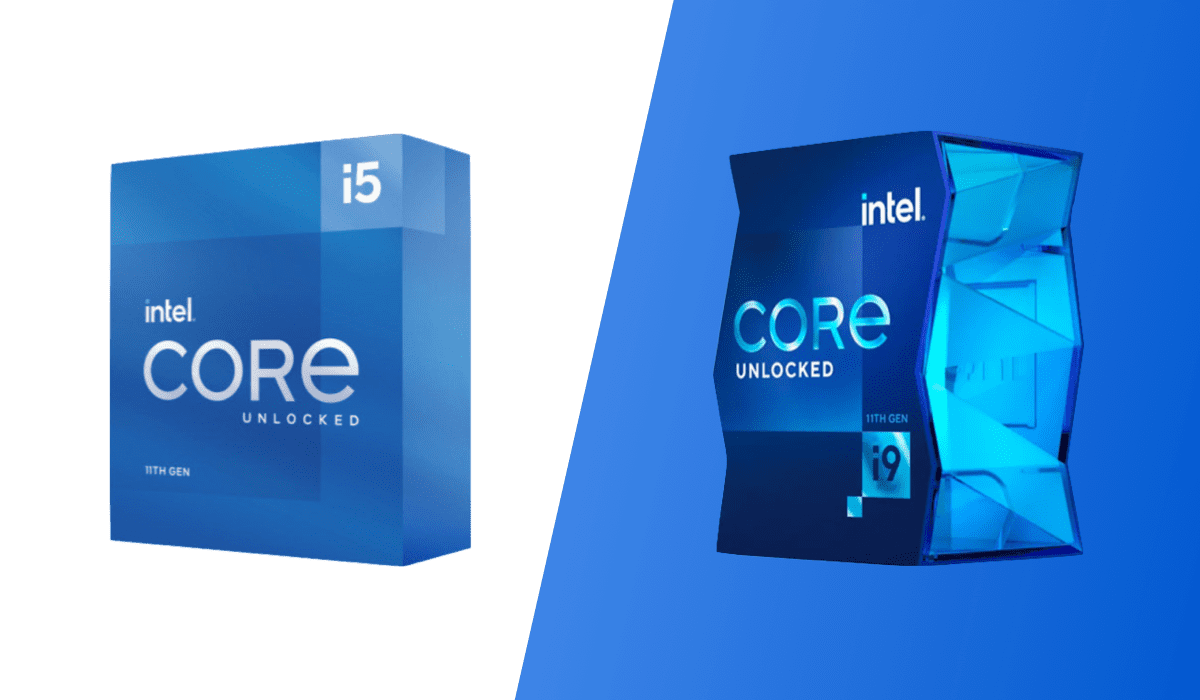 Intel’s 11th generation CPUs hit the market late last March. With data to back up their statistics and test their performance, it is time to consider how they shape up to one another. The 11th generation saw Intel finally catch up to AMD in technology by including PCIe 4.0 support, expanded memory speeds, and updated hyperthreading capabilities. However, across all processors, sacrifices were made. Intel still uses 14nm architecture for their chips and retrofitted their 10nm productions to this size for the generation. This has resulted in a cutting of cores and threads from the previous generation, most notable on the new flagship Core i9-11900k. Was it worth it?

Meanwhile, the newest Core i5-11600k aims to take over the midrange CPU market once again. Targeted to take on AMD’s strong presence at this price point, Intel packed in a variety of features and speeds at an incredible price point. The i5 has always been a strong contender for the best value purchase for gamers, and that may hold true here again. On the enthusiast side of things, the Core i9-11900k sees Intel trying once again to push the envelope and prove their worth. It is certainly not a processor for everyone, and not one that most people will ever need. Upon release, it was lambasted as an overpriced option that served little purpose in the market. Has it gotten any better since then?

With both chips tested and ready to compare, it is time to take them on a fresh spin and see which is the value option for the average user.

The Core i5-11600k is shaping up to be the best offering of Intel’s newest 11th generation. It features six cores and twelve threads with a base clock speed of 3.9 GHz that can boost up to 4.9 GHz. A 12MB L3 cache and thermal design power of 125W complete the main package. Unfortunately, all of Intel’s chips continue to boast a high TDP, allowing AMD to dominate the power efficiency category.

The i5-11600k’s memory speed capacity officially supports DDR4 3200 and features a maximum memory bandwidth of 50 GB/s. This is a nice upgrade over the 10th generation, which needed to overclock to reach these levels. It is also equal to higher-end models of the 11th generation such as the Core i9-11900k, swinging value in favor of this cheaper processor. Intel has finally upgraded to PCIe 4.0 support, making any processor from this generation more future-proofed. Better data transfer speeds of 16 Gb/s allow the system to fully support the newest graphics cards and other additions.

Sadly, Intel has made some choices that make using the i5-11600k as a mid-range CPU more difficult. Because it is an unlocked processor – hence the “k” denomination – no stock cooler comes with the chip. While the high TDP suggests hotter performance anyway, making an aftermarket cooler a good idea, it still would have been nice for some builds.

Unlike most other offerings from Intel’s 11th generation, the value on the i5-11600k is quite high. While it certainly does not offer the best statistics or performance, it is a respectable mid-range CPU that can more than keep up with modern demand. It may even be enough to challenge AMD’s hold over the budget gaming CPU market with their Ryzen 5 5600X. Notably, even now, a few months after release, prices on the i5 remain close to MSRP. In the current time of turbulent prices, that alone is notable.

The value packed into this offering makes it a great deal but also challenges the place of Intel’s other offerings. Combined with the lackluster stats of the Core i9-11900k, as we will see in a moment, it places Intel’s lineup in an awkward position.

As the flagship model for Intel’s 11th generation, expectations were high for the Core i9-11900k. Unfortunately, the processor has taken a few too many steps back to represent what entries in the i9 series have in the past. Featuring fewer cores and similar speeds to the 10th generation core i9, questions about why this processor even needed to exist come into view. Many of these changes are thanks to Intel retrofitting their 10nm mobile architecture to 14nm for this Rocket Lake adaptation. The cuts largely come in the form of fewer cores. The i9-11900k has eight cores and 16 threads – last generation’s 10850k has 10 cores and 20 threads for comparison. Clock speeds for the new offering are average to slightly below average for its price point with a 3.5 GHz base speed and a single-core boost of 5.3 GHz.

In exchange for these reduced and shifted numbers, Intel focused instead on optimization. The advanced technologies seen across the 11th generation are astounding, and the i9 features all the best options. Most interesting among the improvements is Adaptive Boost Technology, a feature meant to increase raw speed through increased power consumption. It only activates when three or more cores are in use but should provide a nice boost to the processor. Another is Turbo Boost Max Technology 3.0, which singles out the best performing core and increases performance when available.

These changes are nice and help keep the i9-11900k in the running but may not be enough to offset the high price point. However, power efficiency is a concern here. The Core i9-11900k has a TDP of 120 Watts, and across multiple tests rises well above that. Especially when compared to AMD’s offerings, thermal efficiency is an issue on this chip. Good aftermarket cooling is an absolute necessity for this chip, as it can throttle quickly.

General upgrades seen in the Core i5-11600k hold here as well. Memory speed support boosts up to DDR4 3200, and memory bandwidth ups to 50 GB/s. PCIe 4.0 support also hits this processor, upping transfer speeds to 16 Gb/s – double that of PCIe 3.0. While not essential for newer graphics cards, it is a welcome upgrade for the future. Still, with all the improvements made here, the Core i9-11900k is expensive and has underperformed across many tests. As the flagship for the next generation, this processor should be cleanly leading the pack across every test – it does not. Combined with the slight downgrade in paper specs and how killer the i5-11600k is, it is tough to find reasons why anyone but the most enthusiast builders should pay for the upgrade.

Over the past few months, we have seen some proper gaming benchmarks come out on Intel’s 11th generation. The Core i9-11900k especially received attention as Intel tried to take its throne back from AMD, making it an easy comparison. For more detailed reports on that processor, check out our article considering how it fits in the current CPU space. As for the i5-11600k, it has received praise and tested well across the mid-level CPU competition. Expect the i9 to outperform the i5 across all benchmarks; the true question is how closely the two perform to one another. At almost double the MSRP, and over double the price in real-world markets, the Core i9-11900k needs to blow the Core i5-11600k away to be worth the increase.

Unfortunately for Intel, that has not been the case across testing. UserBenchmark found that across most games in 1080p on Max settings, there was – at most – a 3% increase. Games tested include CSGO, which saw a 3% increase in FPS, GTA V with a 1% increase, Overwatch and PUBG with 3% increases each, and Fortnite with a 1% increase. As expected, all of these were in favor of the Core i9-11900k. While performance is inarguably better, the upgrade is less than expected.

Similarly, effective speed tests across over 1,000 user benchmarks saw only minor increases for the Core i9. These tests are particularly nice for comparison because they are user submitted and, by extension, cover a wide variety of system configurations. Across all of them, the Core i9-11900k saw an average increase of 8% performance over the Core i5-11600k. The only notable area where the Core i9 significantly outperformed the Core i5 was in octa-core speed tests – obvious, given that the i5 has only six. Testing in other games resulted in similar spreads. In Far Cry 5 in 1080p, Eurogamer found that the 11900k outperformed the 11600k by an average of 20 FPS: 158 to 138. In Cyberpunk 2077, they found only a three percent upgrade once again. Their testing used a 2080TI graphics card and the same rig across all testing.

Intel has nailed the value ratio for the 11th generation Core i5-11600k. The higher price of the Core i9-11900k was already difficult to justify, and Intel overdelivering on the new i5 makes it even harder. For all but the most dedicated enthusiasts looking to wring out every drop of performance, the Core i5-11600k is more than enough. The i5 being available at or near MSRP is also a huge boon; its main competition is AMD’s offerings, which tend to be $100-$200 over MSRP currently. All things considered, it just may be the best value per dollar across all processors right now.

Of course, some common concerns still reside; The Ryzen 5 5600X found at MSRP is still likely a better option, for instance. Intel’s power consumption and, by extension, thermals, are still abnormally high for those looking to create small and lightweight builds. Some intense workstation builds may also prefer the performance of the i9-11900k or i7-11700k. However, the i5-11600k cuts through these downsides with great performance and pricing. Intel fans likely have AMD to thank for the i5-11600k’s great offering. AMD’s powerful midrange offerings are likely a strong reason why this processor packs so much in at a cheap price. With that said, intel has delivered an incredible processor for a fantastic price that is readily available. For all gaming and most workstation use, it is currently the Intel processor to beat – in both price and value.

Want to learn more about the Intel Core i5-11600k? We’ve created a guide on how to purchase one now that it has released. Or compare it to some more processors: