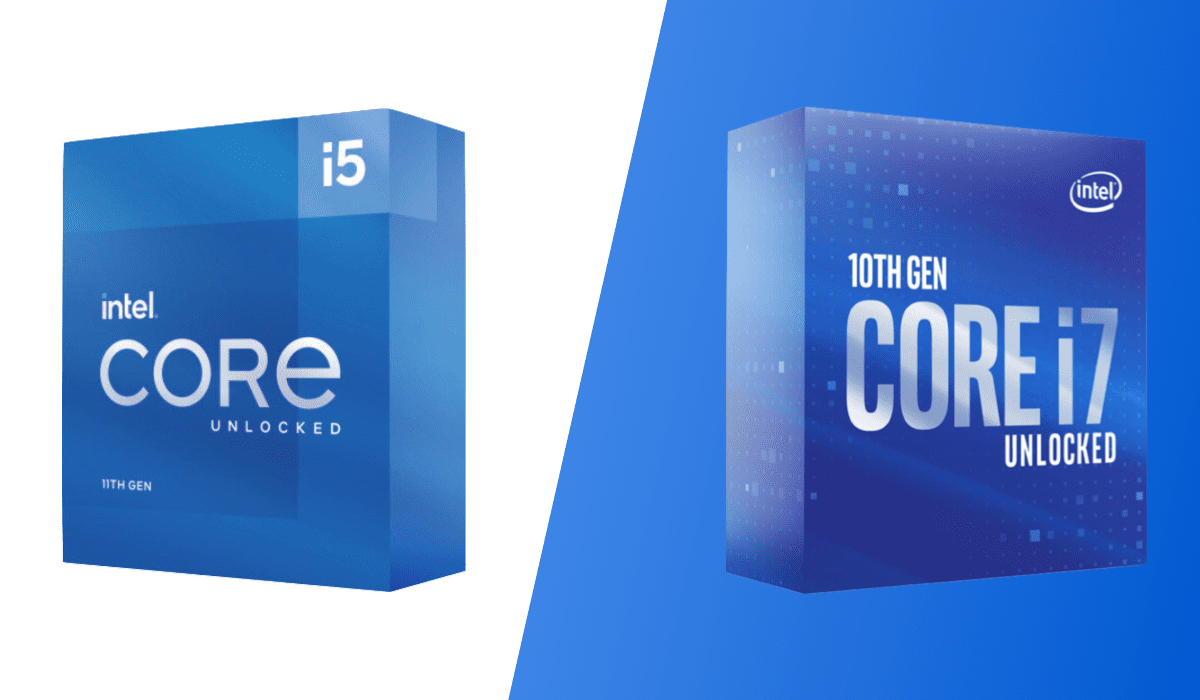 Intel’s 11th generation CPUs have finally released, bringing with them some much-requested updates. Rocketing their chips into modern technology, the new offerings include PCIe 4.0 support, expanded memory speeds, and updated hyperthreading capabilities. However, they have sacrificed some things in the name of progress. To fit their 10nm architecture onto 14nm chips for desktop use, Intel has cut the number of cores and threads down from the 10th generation. Is it worth it?

The newest Core i5-11600k promises a return to form for Intel. Targeted to take on AMD’s strong presence at the midrange CPU, they’ve packed in a variety of features and speeds at an incredible price point. If previous i5 launches are anything to go by, it should serve as Intel’s best value for the average gamer. In contrast, the Core i7-10700k received good reviews upon launch but served as a more specialized product. A higher price point for additional cores and better workstation performance is hard to justify for top value. Recent reductions in price, however, have brought it back into the conversation as a potential hidden gem.

With both chips now readily available and on the market, it’s time to compare specifications and benchmarks to see which provides the most value for gaming and other tasks.

The Core i5-11600k is shaping up to be the best offering of Intel’s newest 11th generation. It features six cores and twelve threads with a base clock speed of 3.9 GHz that can boost up to 4.9 GHz. Its L3 cache is 12 MB, and the thermal design power is an Intel-standard 125W. The new generation continues to allow AMD to dominate the power efficiency in CPUs.

Following what has become tradition for Intel’s unlocked processors, the Core i5-11600k does not ship with a stock cooler. Given its ability to operate as a great midrange CPU, this is a letdown. The high TDP suggests that an aftermarket cooler would be good practice anyway, but many builds could have benefited from a stock inclusion.

The i5-11600k’s memory speed capacity officially supports DDR4 3200 and features a maximum memory bandwidth of 50 GB/s. This is a nice upgrade over the 10th generation, which needed to overclock to reach these levels. Another upgrade is featured in PCIe 4.0 support. Better data transfer speeds of 16 Gb/s allow the system to fully support the newest graphics cards and other additions. The PCIe 3.0 seen in the i7-1007k is half of that, but it does still support the newest cards – making this only a minor win.

The specifications on the 11600k are run-of-the-mill when looked at in a bubble. Where this Core i5 shines is value; Intel was clearly trying to come for AMD’s Ryzen 5 5600X and the stranglehold it has on the middle market. In doing so, it has also positioned this processor exceptionally well against its old offerings. The fact that the i5-11600k is priced at only $262, and actually in stock, means it may be the best choice for almost any gamer right now.

Intel’s Core i7-10700k has featured excellent gaming performance and good multi-core capabilities since its release. As one of the more valuable releases of the 10th generation, it had a difficult time against AMD’s offerings but was never a bad option. It has some notable specification improvements over the Core i5-11600k, featuring an expanded eight cores and 16 threads. Its base clock speed is 3.8 GHz, and it can boost significantly up to 5.1 GHz. This is thanks to Intel’s Turbo Max 3.0. Before the 10th generation, this tech was limited to the i9 family. The i7-10700k marks the first time Intel brought it lower, increasing the value of this chip.

The i7-10700k has great single-core performance, which is often the most important statistic for gaming benchmarks. Its extra 2 cores and 4 threads should also help it perform better in multi-core applications. Memory speeds suffer slightly, as the 10th generation only supports up to 2933 MHz DDR4 memory. This can be increased through overclocking. Futureproofing could also become an issue, as PCIe 4.0 is not supported on these models. While the newest graphics cards will run fine, other additions may suffer moving forward.

As expected, this processor does not come with a stock cooler option. This is a less egregious oversite than on the i5-11600k, as most people springing for the increased price are more interested in higher-end rigs. Its TDP of 125 Watts means that pushing the processor will require a good cooler. This is an area where the 10th generation i7 shines, as overclocking improves performance admirably.

Since its release, this chip has been a great option for higher-end gaming. Its original MSRP price of close to $400 matched. Now, however, it can be had for around $320 – bringing it into the conversation as a great value option.

With the NDA on Intel’s 11th generation processors finally lifted, proper gaming benchmarks are finally released. Numbers are still likely to fluctuate over the coming weeks as rigs optimize, but for now, some decent stats have finally arrived. As for the i7-10700k, it is well established and tested. Based on provided specifications, the Core i7-10700k should out-perform the newer i5-11600k. This is especially true in games with proper multi-core support thanks to the extra 2 cores that the i7 has.

A few different benchmarks have tested both the Core i5-11600k against the i7-10700k. F1 2020, a popular benchmarking game for CPU power, found that the i5-11600k averaged 297.6 FPS on 1080p, High settings. Using the same rig and in-game settings, the i7-10700k averaged 292.3 FPS. Numbers across benchmarks seemed close like this, making the price increase of the previous generation i7 hard to justify.

Testing in Red Dead Redemption 2 resulted in a similar spread. The Core i5-11600k averaged 170.6 FPS during testing on 1080p High settings. The very same rig resulted in a 166.6 FPS average on the Core i7-10700k. Benchmarks from almost all popular games show extremely tight results with the newer i5 taking a slight lead.

Workstation benchmarks paint a slightly different result, with the Core i7-10700k taking occasional wins. This is surprising; most programs such as Blender and Photoshop are much better optimized for multi-threading. While the i7’s two additional cores should afford it a large lead, that doesn’t seem to be the case. In a Blender cycle rendering test, the i7 took 20.2 minutes to render out a logo. The same logo took 22.9 minutes using an 11th generation i5 with stock settings and clock speeds. Across all aspects and benchmarks, the new i5-11600k performs exceptionally well when compared to previous Intel offerings. While still often beat out by AMD’s lineup, benchmarks prove that the newest unlocked i5 holds its own.

Intel has nailed the value ratio for the 11th generation Core i5-11600k. Even with a price reduction for last generation’s i7, it has scored similarly for a cheaper price. Common concerns still reside; AMD likely still has better offerings for those who can find their processors at MSRP, for instance. Intel’s power consumption is still abnormally high for those looking to create small and lightweight builds. However, the i5-11600k cuts through these downsides with great performance and pricing.

For a long while in the CPU space, Intel set the prices and AMD worked around that. The i5-11600k is proof that those times have passed. AMD’s powerful midrange offerings are likely a strong reason why this processor packs so much in at a cheap price. While the rest of the 11th generation faces fair criticisms of being underwhelming (such as the flagship i9-11900k), the i5-11600k deserves a worthwhile look.

This is not to say that the Core i7-10700k is a bad processor. Especially if the price continues to drop, it may become a great option for many gamers looking for a valuable processor. If the i5-11600k faces production and demand issues similar to AMD’s Ryzen 5 5600x, it could easily become a stand-in. For now, though, the Core i5-11600k has carved out a nice space for itself at its price.

Want to learn more about the Intel core i5-11600k? We’ve created a guide on how to purchase one now that it has released. Or compare it to some more processors: