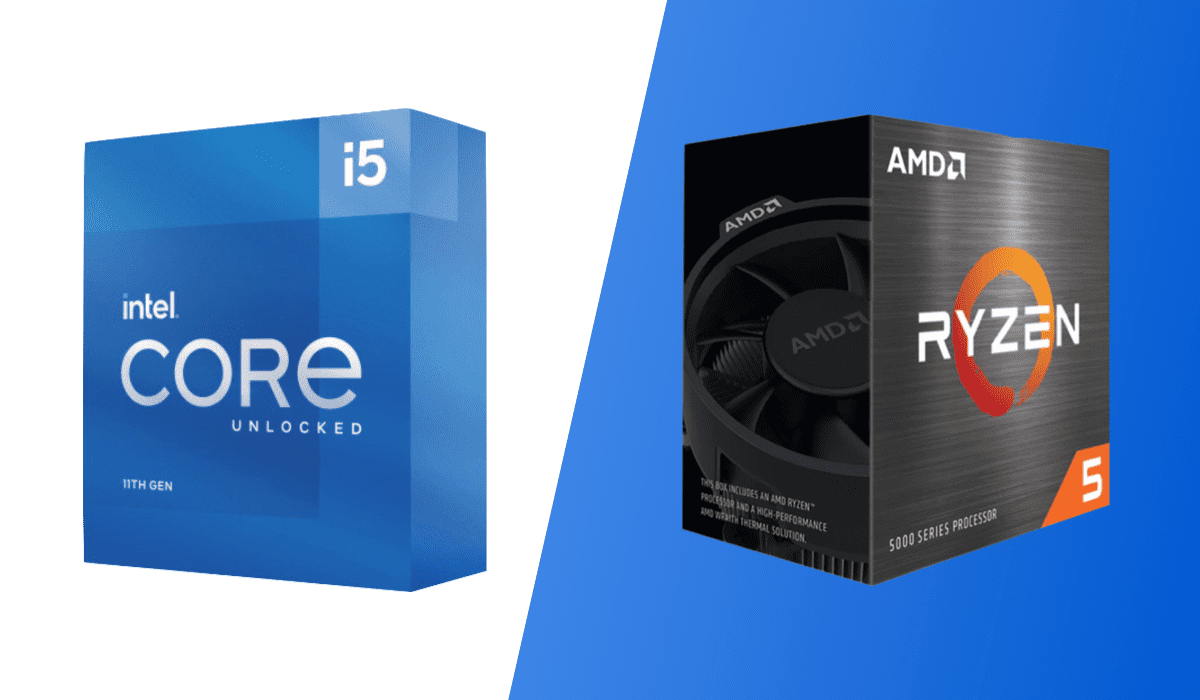 Intel’s tug of war with Team Red’s competitive line-up of modern CPUs continues with the company’s upcoming launch of the Rocket Lake i5-11600K. These new chips have tagged into the ring and are squaring up directly with the new Ryzen 5000 series of chips backed by AMD’s impressive Zen 3 architecture. The new i5-11600K is looking to go toe to toe with the go-to mid-tier chip of this generation the Ryzen 5600X. These two giants are duking it out once again, but it’s a close match to call this time around. AMD and Intel are both offering feature-packed CPUs that have set a new standard for gamers looking to play AAA titles on a reasonable budget.

AMD won the last battle against the previous generation Intel chips by focusing less on base core count and more on inter-core latency, which proved to be the killer of their previous Zen 2 based chips. The 5000 series CPUs have been able to dominate the market with impressive 32MB-64MB L3 caches that let the chip process multi-core tasks at a smoother rate, leading to a more reliable gaming experience due to more stable frame rates. Essentially, a larger L3 cache means that the CPU has to communicate less with slower memory like RAM.

With that history in mind, many anticipated a greater L3 cache in the new Rocket Lake line-up of CPUs. But, as Intel frequently does, the company surprised the market by only including a 12MB cache on the i5-11600K. Intel has said that they’ve improved those DRAM speeds across the board, but speed is not always the key factor when it comes to on-chip memory. Having a larger pool to store and use data from is often more important than being able to pull that data slightly quicker, especially as more modern games demand stronger multi-thread performance than past generations. With a staggering 32MB of L3 cache built into the Ryzen 5 5600X, Intel has to bow down to AMD yet again in this particular metric.

To make matters worse, only the i9-11900K supports a 1:1 use of the included DDR4-3200 memory at full frequency. All other chips in the line-up, including the i5-11600K, are stuck running that memory at half the optimal frequency, which may lead to bottle-necking on multi-threaded tasks. In comparison, the Ryzen 5 5600X can take full advantage of its same onboard DDR4-3200 memory cache.

Intel claims to be taking the quality over quantity approach when it comes to the core count of their flagship CPUs. Instead of matching or exceeding AMD’s staggering core and thread counts, Team Blue has instead opted to maintain the same infrastructure as their previous generation Comet Lake chips. Intel’s resistance to changing the infrastructure of these chips means that AMD’s denser 7nm nodes get an automatic leg up in the race against Intel’s 14nm nodes.

Less dense chips and fewer cores across the board may seem like a bad start for Intel’s attempt at reclaiming the CPU market, but they do manage to come out of the gate with 3.9GHz speeds out of the box for the i5-11600K. This matches the clock speeds of the Ryzen 5 5600X, but Intel pulls out slightly ahead with overclockable speeds of 4.9GHz. The Ryzen 5 5600X starts at 3.7 GHz and can climb up to 4.6GHz with overclocking.

That performance boost is still narrow, as both chips are set with 6 cores and 12 threads. The i5-11600K is the only chip that manages to match AMD’s 5000 series core counts, and it is impressive that Intel has managed to beat out the Ryzen 5 5600X in base clock speed considering the slightly dated architecture the chips are based on. That boost in performance comes with an expected hungry power draw from Intel. Compared to the cool 65W draw of the Ryzen 5 5600X, the i5-11600K gobbles power at 125W.

It’s no surprise that the Intel chip manages to draw more power with its included onboard graphics. Team Blue has upgraded the graphics from its previous generation of chips and includes UHD Graphics 750 that users may recognize from the Tiger Lake series of chips. Intel has floated around claims that these graphics can boost gaming performance by at least 50% compared to previous chips, but, arguably, most consumers looking for CPUs at this price-range are likely going to purchase an external graphics card to get the most out of their PC. While integrated is a welcome feature to some, those looking for gaming performance won’t find much of a benefit to having onboard graphics.

On Team Red’s side of things, AMD includes a Wraith Spire cooler out of the box. This cooler has been lauded as one of the best stock coolers on the market, though enthusiasts may still want to purchase a more robust cooling solution if they plan on overclocking or performing prolonged resource-heavy tasks.

Integrated graphics and an included cooler come down largely to individual use cases and preferences. Having Intel onboard graphics may be a boon to some, while others will find that feature sits unused. Likewise, many building PCs at this level may have already purchased a third-party cooler.

With the slated 3/30/21 release of the i5-11600K, Intel is trying its best to strike back at the already released Ryzen 5000 series chips while Team Red faces mass supply shortages. But Intel seems to have arrived a little too late to the party to take full advantage of that weakness, as AMD has begun to recover and meet the demand for the first time since late 2020. Since Intel’s chip has yet to be released, it is unknown whether or not they will face similar shortages as their competitors.

What is known is the MSRP of both CPUs. AMD hiked their prices with the 5000 series of CPUs compared to their previous generations, putting the Ryzen 5 5600X right at $299. Intel decided to price their CPUs competitively this time around, and they set the i5-11600K at an attractive $262 for the K model with integrated graphics and an even lower $236 for the KF model that takes integrated graphics out of the equation.

Does the Ryzen 5 5600X’s performance justify the higher price tag over the more budget-friendly i5-11600K? That answer isn’t as easy to give as it was for other matchups like the Ryzen 5 5600X vs the previous generation i5-10600K, where AMD won by a sizable margin. This matchup is much more neck and neck. The Ryzen 5 5600X still has a lot to offer that many consumers will find appealing, but the raw price for performance of the i5-11600K gives it the crown. This victory will be tentative since the chip has yet to be released to consumers as a whole. But, for now, Intel can enjoy the podium with this impressive CPU.