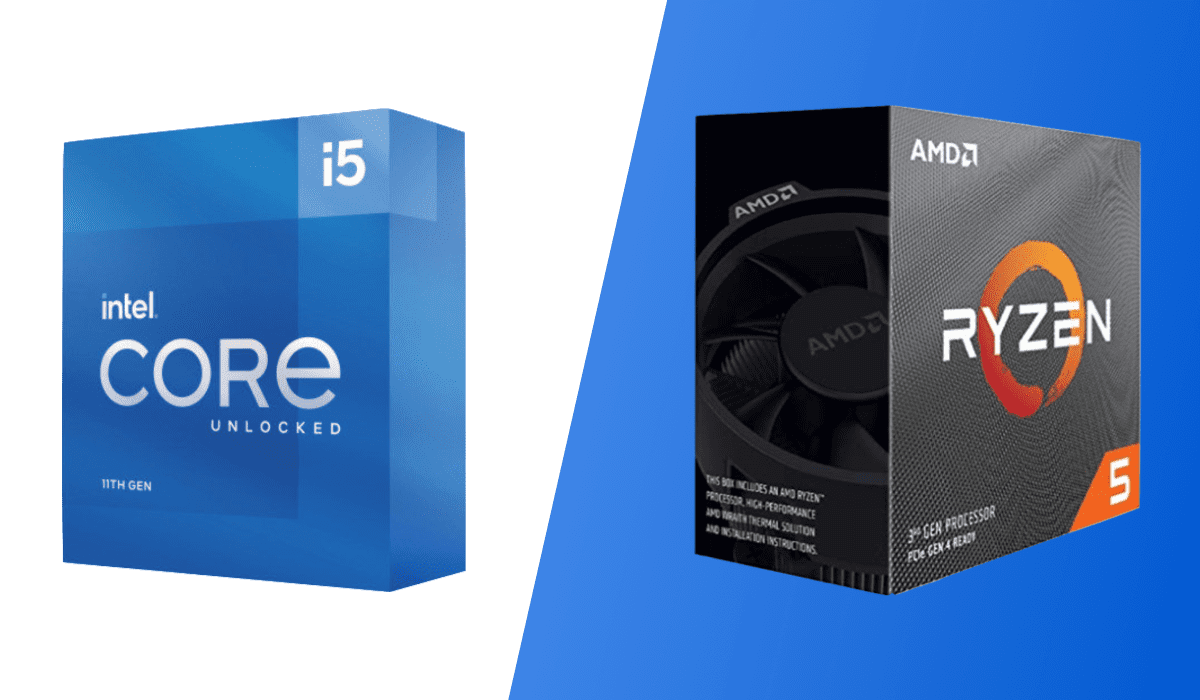 The release of Intel’s 11th generation CPUs is right around the corner. Sticking with 14nm architecture and named “Rocket Lake”, the new processors are still under NDA. A few models gotten outside of the NDA have provided tests and benchmarks, so some tests are available. Using these, early comparisons to other options can begin. The Intel i5-11600k is, as expected, a middle of the road option that will call to many builders.

Intel aims to regain the lead that AMD’s processors have gained in the CPU space over the last few generations. The question of their success remains to be answered. The AMD Ryzen 5 3600 released in 2019 and remains a great budget option. When found at MSRP, it is one of the best values around. The i5-11600k keeps pricing low while upping clock speeds and power draw; is it enough to take the lead in value?

A shared core and thread count is one of the few similarities the two processors have. The Ryzen 5 3600 remains an efficient, fast option built on a 7nm architecture. In comparison, the i5-11600k is lining up to be a larger, more power-hungry processor still clinging to a 14nm size. It will almost certainly be more powerful than the Ryzen 5 3600. However, a higher price point and worse energy efficiency accompany that power. At retail price, the i5-11600k will be available for about $60 more than the 3600.

An examination of current tests and specs should help determine whether Intel has managed to win back the budget processor area.

As the budget-friendly and midrange option of Intel’s 11th generation, the i5-11600k features a number of great options. The processor’s six cores and twelve threads have a base clock speed of 3.9 GHz that can boost up to 4.9 GHz. Its L3 cache is 12 MB, and the thermal design power is a large 125W. This remains average for Intel’s offerings but is almost double the TDP of AMD’s lineup. The higher power draw means better cooling is a must, and small builds may become difficult.

The i5-11600k’s memory speed capacity officially supports DDR4 3200 and features a maximum memory bandwidth of 50 GB/s. Intel’s processors have traditionally relied on fast memory, so the addition of higher memory speeds is a welcome upgrade. The i5-11600k comes with hyperthreading and can overclock to come closer to the performance of the new i7-11700k, allowing for some nice upgrades in pricier rigs.

The 11600k includes Intel’s UHD Graphics 750, a low-powered integrated graphics option. While almost everyone will want to include a dedicated graphics card as well, there is a noticeable upgrade here over the last generation. Notably, the Ryzen 5 3600 does not include an onboard GPU.

Across early testing, the entire 11th generation has lower than expected multi-core capabilities. The i5-11600k follows the pattern. However, the MSRP of $262 may make up the difference. The i5-11600k officially releases on March 30th, 2021.

AMD’s Ryzen 5 3600 is one of the best value CPUs on the market and has been since its release. Like the i5-11600k, it boasts six cores and twelve threads. Its clock speeds are lower, with a base of 3.6 GHz. Boosting allows it to reach 4.2 GHz. While certainly still respectable, the processor begins to show its age when compared to the i5-11600k’s speeds.

It includes a significantly larger L3 cache of 32MB and has a much better wattage to power ratio. The Ryzen 5 3600’s TDP is a mere 65W, and it retains its place as one of the most efficient processors on the market. AMD continues to offer more efficient processors than Intel for many reasons, including the use of 7nm architecture instead of 14nm. The lowered TDP means producing less heat, helping to keep the system cool. It also helps the impact of the CPU to remain low, making it a great option for low-profile or small builds.

AMD’s simultaneous multi-threading, their version of Intel’s hyperthreading, is also a feature of this processor. Combined with a simple overclocking option, the Ryzen 5 3600 can punch well above its weight class. It also features great memory capabilities despite releasing almost two years ago. The processor supports speeds up to 3200 MHz and has a maximum memory bandwidth of 47.68 GB/s. The Ryzen 3600 does not include any integrated graphics capabilities, so a dedicated card is a must.

While recent demand has dwindled supply and raised the price of the Ryzen 5 3600, it is still readily available around its MSRP of $199. This low price point for the specifications it has is the key reason why comparisons continue around the CPU.

Given the upgrades to core speed included in the i5-11600k, it is likely to win across most categories when compared to the Ryzen 3600. Benchmarks for the i5-11600k are still rare to find, at least until it releases shortly. However, leaks from various processors acquired out of NDA have provided enough to compare. As with all early benchmarks, the testing rig has likely not been optimized; speeds for the Core i5 will likely go up. In comparison, the Ryzen 5 3600’s performance is well established.

The Geekbench 5 benchmark has tested both processors and found notable differences in scores. More recent tests of the i5-11600k average about 1700 points in single-core performance. Multi-core tests clock in at roughly 8200 points. Of note, there is significant volatility in scoring due to how new the processor is. Other confirmed scores using the core i5 have been as low as 1565 in single-core tests and 6220 in multi-core scoring. Expect scores to land somewhere in the middle for the purposes of comparison.

While early benchmarks support the theory that the i5-11600k will perform better than the Ryzen 5 3600, there is still a case to make for choosing AMD. The Ryzen 5 3600 is still much more efficient than anything Intel is pushing out. Its TDP of 65 Watts is just under half of the 125 Watts the Core i5-11600k requires. The jump in power that comes with the new i5 is lower than the jump in wattage.

Less efficient processors produce more heat and draw more power, making it important to consider the rest of the rig. Small builds with limited space for fans or already difficult thermals may not want to upgrade to more power. Similarly, those worried about pushing the limits of their power supply may find it necessary to upgrade more than they wanted to.

Outside of the rare case where a more efficient footprint is necessary, the core i5-11600k is a better value than the Ryzen 5 3600. With better scores in both single-core and multi-core applications, only a slight price increase, and newer support, the 11th generation core i5 has finally managed to make the Ryzen 3600 show its age.

Winning across all categories comes with a slight price increase that seems justified. The i5-11600k is set to retail for $262, although finding it at MSRP early could be a challenge. The Ryzen 5 3600 faces similar problems. Supplies have steadily dwindled in the past few months thanks to low production and high demand. The original MSRP of $199 can be difficult to find right now. Either processor is a great value for their base price that can quickly become outclassed if price skyrockets. The core-i5-11600k manages to edge out the competition and is a fantastic option for a mid-range CPU.

Want to learn more about the Intel core i5-11600k? We’ve created a guide to purchasing one when it releases. Or, compare it to more processors: