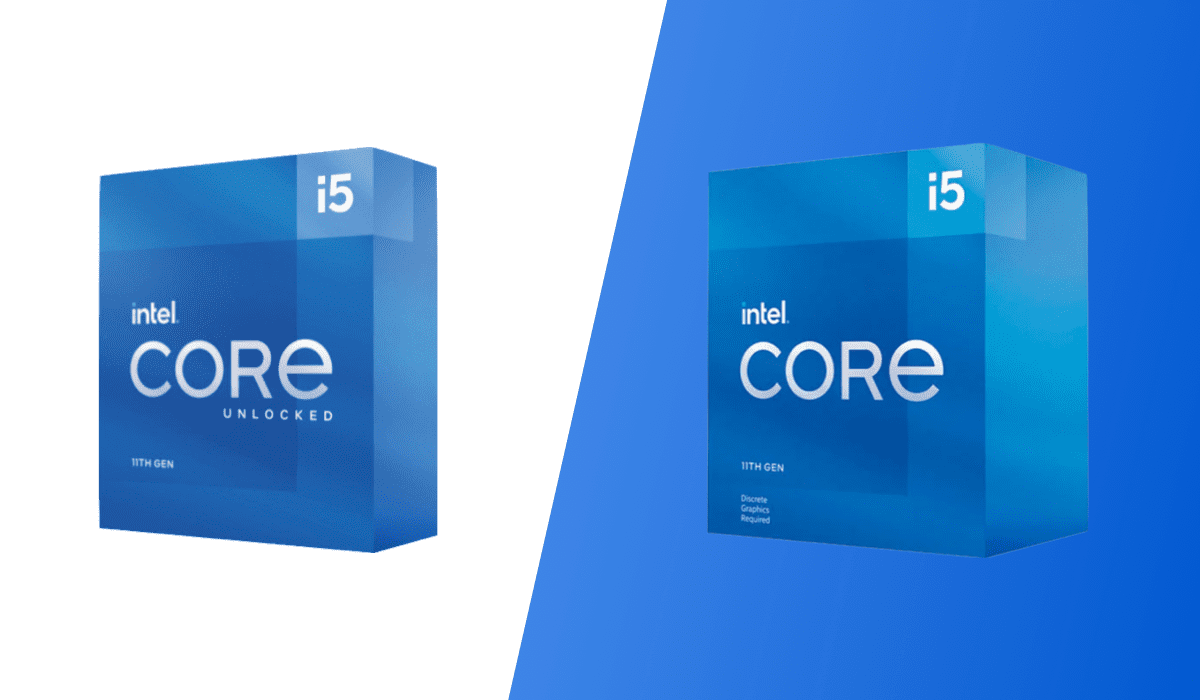 Whenever you’re shopping for a new Intel CPU, you’ll be met with multiple variants of the same processor tier—be it Core i5, i7 or i9. Of these, the K (and KF) variants are considered the “premium option” from each line-up. The F variants being considerably lower in rice even though they’re of the same CPU type.

The Core i5 series has risen in popularity among midrange gamers and content creators alike. Mostly due to their respectable performance numbers for a price that isn’t too outrageous. This has only become more apparent after the release of Team Blue’s 10th and 11th Gen series of processors. With hyperthreading now enabled on all SKUs; the 6 core-12 thread Core i5 series from Rocket Late is particularly enticing to consumers. Especially since Ryzen 5000 is so hard to come by.

So, if you’re on a budget and searching for the best 11th Gen i5 processor to fit your workload; you may be wondering if its worth it to spend extra on a Core i5 11600K instead of sticking to the lower tier Core i5 11400F. We’ll be putting the midrange siblings head-to-head in order to find out just that!

On paper, the only similarities that these two CPUs have is the number of cores and threads. The Core i5 11600K seems to be more powerful than the 11400F in almost every way. Granted, it is also over a hundred dollars more expensive than its younger brother.

The 11600K—like all other K series Intel processors; does not come with a stock cooler. However, the 11400F does. One might want to take that into consideration if you have a tight budget.

But does the Core i5 11600K really justify its higher price tag over the 11400F? Let’s see what the performance results have to say:

In a nutshell; if you’re going to be primarily gaming, coughing up over a hundred dollars for the Core i5 11600K seems illogical. The Core i5 11400F puts up an exemplary fight in gaming and manages stay on par with its higher clocked sibling.  The largest difference observed was in Rainbow Six Siege, where the 11600K achieved 43 frames per second over the 11400F. But this is an edge case scenario where the game was heavily CPU bound, with framerates well over 400. The rest of the results paint the same picture; with the much cheaper offering from team blue performing admirably against its pricier counterpart.

But if gaming won’t be the only thing that you will be doing on your system, its worth looking at the productivity results to see how the Core i5 11400F fares against its speedier rival.

The SiSoft Sandra Cryptography multi-threaded performance test results showed that the Core i5 11600K had a speed of 20.4 GB/s while the 11400F only managed 18.2 GB/s.

Next up, the Chromium Code Compile results show that the 11600K managed to complete the test within 7223 seconds, while the 11400F took longer, with 7995 seconds.

There’s no way around it; the Core i5 11600K is faster and more robust when it comes to CPU-heavy tasks than the 11400F. For those who primarily want a midrange workstation with strong CPU performance, the 11600K is the way to go.

The rated thermal design power, or TDP of the Core i5 11600K is higher than the that of the 11400F—with 95W and 65W respectively. But in real use, these numbers are much higher. But does the K variant really draw a lot more power than the 11400F?

In reality, the total system power draw of the two processors is quite close. For instance, during the Blender Open Data render, the 11400F only drew 181W. Meanwhile, the 11600K drew 217W, which is slightly higher but with quite a noticeable increase in performance as well. Both processors are not particularly power-hungry monsters (unlike the Core i9 11900K), so those of you who want a small form factor setup can rest easy with either of these CPUs.

Both the Core i5 11600K and the 11400F are from Intel’s 11th Generation of Rocket Lake processors. This means that both these SKUs run on the LGA 1200 socket and will be the last generation of processors to do so. If you ever want to upgrade from the Intel 11th Gen series; you will have to pony up for a new motherboard that supports LGA 1700. With DDR5 and other new technologies on the horizon, a complete platform upgrade is inevitable regardless of which modern CPU you buy.

The launch of the 11th Gen Rocket Lake processors from Intel was more or less met with monotonous applause. But the midrange line-up of 11th Gen Core i5 processors have actually been regarded as some of the best bang-for-the-buck CPUs that you could buy in 2021. With the absence of budget oriented and midrange processors from AMD due to shortages, Intel finds itself in a market that is virtually abandoned.

So, if you plan on buying a new CPU for your gaming system, look no further than the Core i5 11400F. Its 6 cores and 12 threads are sufficiently fast to run the latest triple A titles at high frames nearly equal to that of the pricier 11600K. but if you plan on doing anything heavier with your system, the 11600K will be the best bet for you. Its faster clock speeds and higher thermal headroom means that it will come in handy for heavy workstation users, while being quick and efficient.

If you plan on building a system with either of these processors, check out some of our guides below: