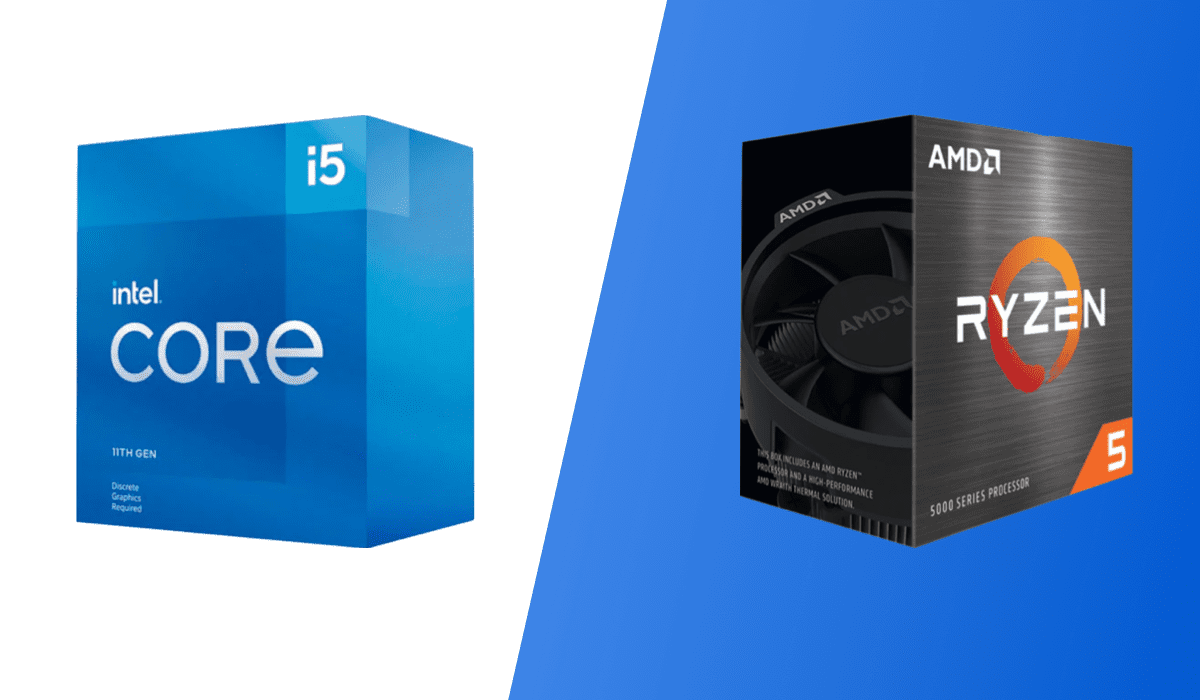 If you’re a gamer or any productivity user, deciding on which CPU to buy is always a tough choice. Moreover, if you plan on building on a budget but still want the best performance for your money; you’d be asking yourself “Intel or AMD?”

As it stands now, its Team Blue who offers cheaper options in their latest line-up. The surprisingly competent Core i5 11400F is a tiny beast of a CPU. Nonetheless, it’s only fair that we compare it to Team Red’s cheapest offering among their latest Zen 3 processors; the Ryzen 5 5600X. Read on to find out whether you really need to cough up more dough for AMD, or if you’ll be just fine sticking to Intel’s newly crowned budget champ.

At first glance, the specifications show that the Ryzen 5 5600X will vastly outperform the Core i5 11400F. However, it’s also clear why since Team Red’s cheapest Zen 3 offering costs nearly twice as much as the 11400F at its MSRP. The base clock speed of the Ryzen 5 is much higher than that of the Core i5 11400F, while its boost clock is another 200MHz higher than that of Team Blue.

Both have the same advertised thermal design power; however, this means little since in real use cases the power draw of both chips will be higher.

In order to see just how much these two processors differ in terms of performance, let’s turn to the benchmarks.

The 1080p gaming benchmarks show the Ryzen 5 5600X being mostly ahead of the Core i5 11400F. The only exceptions being Assassin’s Creed Valhalla and Red Dead Redemption 2; two very GPU intensive games that both have equal average framerates on both processors. Cyberpunk 2077 sees a slightly higher framerate on the Core i5 11400F. But this difference is a tossup between either, so your mileage may vary. The largest variation in FPS is shown in Metro Exodus, with the Ryzen 5 gaining 12 frames per second over the Core i5.

All-in-all, the eight game averages for Team Blue and Team Red are 134 and 137.25 respectively. It goes without saying that for games, paying nearly double for an average 2% increase in framerate does not seem all that worth it.

Moving onto CPU intensive productivity workloads, we can see how the $157 MSRP Core i5 11400F fares against the much more expensive Ryzen 5 5600X.

Starting off with the Cinebench R20 Multi Core benchmark, the Core i5 11400F cores 3954, while the Ryzen 5 5600X scored 4462; an expected gain. Moving onto the Single Core workloads in Cinebench R20, Team Blue manages to obtain a score of 541 with Team Red blasting past with a score of 600.

In the SiSoft Sandra Cryptography Multi Threaded performance test, the Core i5 11400F achieved a speed of 18.2 GB/s, and as usual the Ryzen 5 5600X was faster at 19.2 GB/s. Meanwhile the 11400F managed to complete the Chromium Code Compile test in 7995 seconds, while the faster Zen 3 5600X completed it in 7047 seconds. The DaVinci Resolve 4K benchmarks scores show that Team Blue and Team Red are quite close, with the former having a score of 969, though the latter outdoes it with a score of 1017.

Finally, the Blender Open Data render times for both CPUs show that the Ryzen 5 5600X reached completion in 1122 seconds while the 11400F took longer at 1233 seconds.

Unlike the gaming benchmark, the productivity results for the two CPUs give a very binary result. The Zen 3 based Ryzen 5 5600X is clearly much faster than Intel’s Rocket Lake budget counterpart. Users primarily aiming for a workstation build would appreciate the added performance and faster render times provided by Team Red; even if it means it costs much more. However, it is impressive to see the results of the Core i5 11400F often surpassing last year’s Core i5 10600K; which was a much pricier processor at launch.

When it comes to total system power draw, there are no surprises here. Intel’s notoriously high power consumption is again evident here, as the Core i5 11400F equipped system had a total power draw of 181W during the Blender render. Meanwhile, the Ryzen 5 5600X consumed less power at 157W while outperforming the Team Blue variant during the same test. So, if you wish to build a cool Small Form Factor PC, it might be worth spending extra to get the less power-hungry CPU.

In terms of motherboard inter-generational compatibility, both Intel and AMD are on their last legs. The long-supported socket AM4 ends its compatibility with the Ryzen 5000 series of processors. Similarly; as Intel only supports two generations of CPU per socket, the support for LGA 1200 ends with the Rocket Lake line-up of CPUs. So, if you ever wish to upgrade from either processor, you will need to spend extra on a newer motherboard as well.

If you’re planning on solely gaming on your PC, there really is only one way to go: Intel. But this is not because they’ve got the most powerful gaming processors. In fact, it’s only because of the enormous demand and supply constraints that have affected the Ryzen 5000 series that you will be better off with the 11th Gen Core i5 11400F. Currently, the Ryzen 5 5600X sells for $450 US Dollars on Amazon. In contrast, the street price of the Core i5 11400F is only $174. Since it’s simply dull-witted to spend $276 dollars more for a 10 FPS gain, gamers are better off with the newly crowned budget champ; the 11400F.

If you’re a workstation or productivity user on a budget however, you might need to consider ponying up the premium for a Ryzen 5 5600X. It outperforms the Intel counterpart in productivity workloads by quite a margin, and since time is money; you will probably be glad you chose AMD in the long run.

Check out some of our guides below to help you with your next Intel or AMD build: