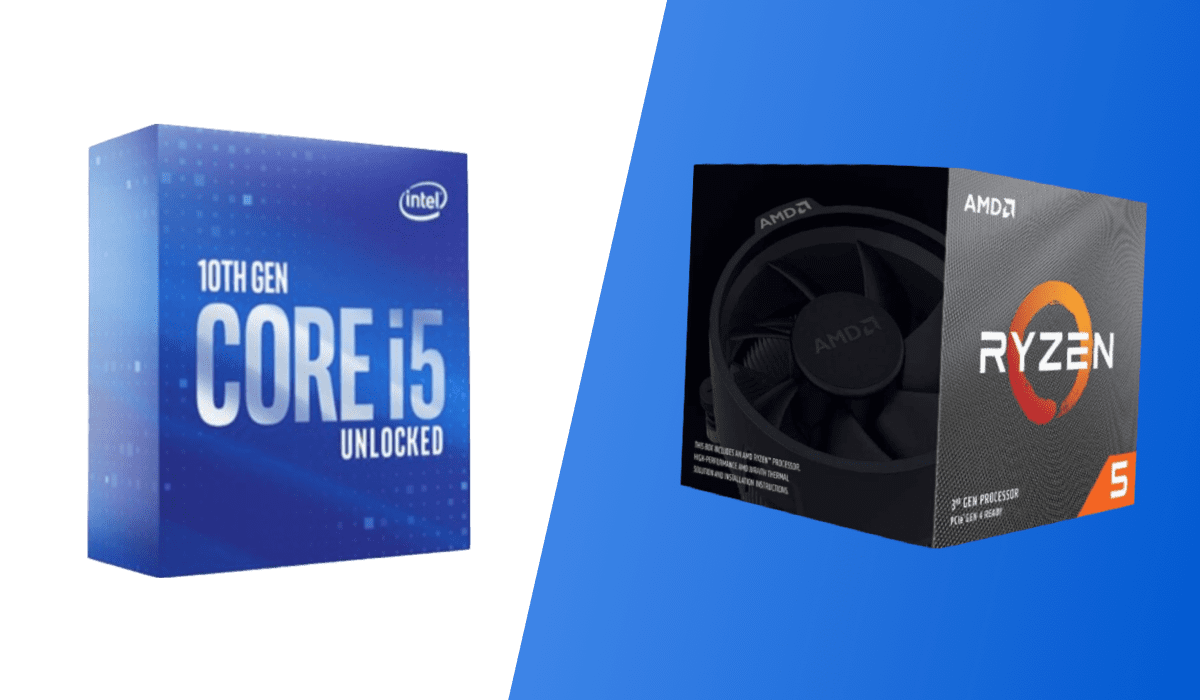 When AMD unveiled their shiny new Ryzen 5000 series of processors in October of 2020, a lot of PC hardware enthusiasts were eager to get their hands on them. The new Zen 3 architecture on AMD’s 7nm manufacturing process meant huge gains in gaming performance, even surpassing that of intel. However, nobody foresaw the arrival of the Dark Ages of the PC Masterrace. With every new piece of hardware being essentially a paper launch, there was simply not enough stock available for excited fans to buy. This meant that consumers had no choice but to comb through the previous generation of processors in order to get their hands on a new CPU. And the question on everyone’s minds was; is Ryzen 3rd gen a viable option in 2021, or if they were better off going with Intel.

Ever since 3rd gen Ryzen took the PC world by storm during Q3 2019, the age-old rivalry between AMD and Intel was reignited stronger than ever before. With the introduction of Ryzen 3000, AMD managed to improve on nearly every aspect of their processors from last gen. By going from a 12nm process in Zen+ to a faster and more efficient 7nm process in Zen 2, AMD showed big gains in a lot of areas where it counted. It’s this monumental return to form that made Intel go back to the drawing board and try to escape from the 14nm (++) black hole they’ve been stuck in for the past few generations.

While it was rather disappointing to see that Intel was still sticking to the dated 14nm process as they launched their shiny new 10th gen Comet Lake CPUs, it was quite the surprise to see how well they performed for a five-year-old manufacturing process. Additionally, each of the new SKUs from the i3 to the top-end i9 received hyperthreading, which was a first for Intel. AMD however, has been giving all its consumer processors hyperthreading since Ryzen first launched. Industry analysts claim that AMD’s meteoric rise to become the most cost-efficient of CPUs is what forced Intel’s hand in order to unlock hyperthreading.

While the Core i9 10900K traded blows with the Ryzen 9 3900X, an even fiercer battle was taking place in the mid-range tier. The fan-favourite budget champ of Team Red-Ryzen 5 3600X; had a new challenger. The Core i5 10600K, Intel’s first i5 CPU with 6 cores and 12 threads, matching the Ryzen 5. Unlike its previous-gen variant, the i5 10600K gains a respectable 200MHz on the boost clock and a cool 400MHz higher base clock speed. This essentially makes the 10th Gen Core i5 a rebranded and discounted Core i7 8700K, one of the top-selling processors among Intel’s 2018 line-up.

Team Blue aggressively price-matched the Ryzen 5 at launch with only a ten-dollar price premium and positioned itself as the midrange gaming champ. But which of these beastly processors should you, the consumer; spend your hard-earned money on?

When it comes to pure clock speeds, the Core i5 10600K has the Ryzen 5 3600X beat. The Core i5 boasts a base clock of 4.1GHz and a boost clock of 4.8GHz, this is considerably faster than Team Red’s offering of 3.8GHz base and 4.1GHz boost. This sizable overhead in clock speeds allow the Intel processor to outshine AMD in certain workloads; especially gaming.

In nearly all gaming workloads, the Core i5 manages to stay ahead of the Ryzen 5. Since modern games do not really require any more than 6 cores, the AMD and Intel processors are both extremely capable gaming CPUs, with Team Blue edging out Team Red by a slight margin due to its superior clock speeds.

Thus, Intel manages to hold their lead in processor speeds another generation. But this does not tell the whole story. While slower, the Ryzen 5 is insanely power efficient. Under full load, it never exceeds more than 76W. The Core i5 on the other hand, draws considerably more power at load with a recorded max of 107W. When overclocked to 5.0GHz, power consumption skyrockets to a steep 175W.

Intel however, has seen a remarkable improvement in the thermal performance of the 10th Gen processors; with a peak recorded temperature of 62°C over the 3600X’s 75°C. This is mainly due to the reduced die size of the 10th Gen processors, where Intel managed to increase the size of the IHS (Integrated Heat Spreader), resulting in the aforementioned thermal performance. This means that those who are building thermally limited systems such as SFFPCs (Small Form Factor PCs) might prefer the 10600K due to its slight edge.

Up to now, CPU intensive workload performance seemed to be a toss-up between either processor. However, with the 10600K’s ability to essentially be overclocked with one click (given that you have adequate cooling), gives the processor an enough boost to successfully surpass the 3600X in all workloads. The sheer improvement in performance of the Core i5 post-overclock suggests that it is quite held back by its stock speeds, which makes it a measurably faster CPU than the 3600X.

Yes, the Ryzen 5 can also be overclocked. But given that the 3600X is a binned 3600, it is essentially in a state of factory overclock out of the box. What this means for the AMD processor is that it does not OC as well as the Core i5 10600K. Not to mention the more complex steps needed to overclock the 3600X for no real improvement over the overclocked Core i5, and worse thermals make it an unviable option.

AMD has always led the industry in terms of CPU compatibility and socket support since the inception of Ryzen. Needless to say, that trend continues to be evident here. The Ryzen 5 3600X is compatible across all socket AM4 motherboards and is fully unlocked for overclocking on all chipsets other than the entry-level A series. If you’re on an older generation of Ryzen, you can simply drop in the Ryzen 5 3600X in your existing motherboard with a simple BIOS update and be good to go.

On the other hand, Intel’s somewhat irritating practice of providing only two generations of CPU support per socket type is prevalent here. After bidding adieu to socket LGA1151 from 9th Gen, Intel has introduced the brand-new socket LGA1200 for the 10th (and 11th) generations of processors. Meaning that if you’re considering upgrading to the Core i5 10600K, you will have to dish out extra for a brand new B460 or Z490 motherboard regardless of whether you’re a brand new or pre-existing user of either chipmaker. Another pain point for Intel is that only the much more premium Z490 chipsets allow the overclocking of its K series CPUs. So, if you want to overclock the 10600K (which we highly recommend you do), the cost of upgrading will be very high when compared to AMD.

With third-gen Ryzen, AMD also introduced PCIe gen 4.0 interface, while Intel remained on PCIe 3.0 with 10th Gen. In real world scenarios, this doesn’t mean much except for the fact that the 3600X will be slightly more future-proof than the 10600K in regard to GPUs and SSDs that use PCIe 4.0 lanes at higher bandwidths.

With MSRPs of $240 and $262 for the 3600X and the 10600K respectively, Team Red’s offering seems a more enticing deal as you get performance that’s a stone’s throw away from its more expensive rival. For budget conscious builders who desire respectable CPU performance at a reasonable price, the $22 difference amounts to a lot when considering the price of an entire system. However, at the time of writing, the tumultuous pricing of midrange CPUs (not to mention the abhorrent state of the current PC market) has made it a much harder choice. You can often find the Core i5 10600K for $20 to $30 less than the AMD Ryzen 5 3600X. Thus, unless you’re already on the AM4 platform, it seems the logical choice to opt for the Core i5 10600K.

As Intel and AMD continue to duke it out in the midrange gaming market, the options are aplenty for you, the consumer. Whether you’re an avid gamer or a professional who is on the prowl for a very capable processor without breaking the bank, our recommendation is the Intel Core i5 10600K. With superior gaming performance as a result of its zippy clock speeds, and equally superior performance in CPU-intensive tasks when overclocked, the i5 offers more for its price in the current market than what the Ryzen 5 3600X can handle. The choice becomes all the more evident given the fact that AMD’s sub-200-dollar counterpart; the Ryzen 5 3600 has the ability to be overclocked to match the performance of a 3600X.

Thus, in this particular battle, the Intel Core i5 10600K takes the cake for both Gaming and Productivity Performance.

AMD has put out its fair share of heavy hitters against Intel. However, in this particular battle, it is Team Blue who emerge superior.