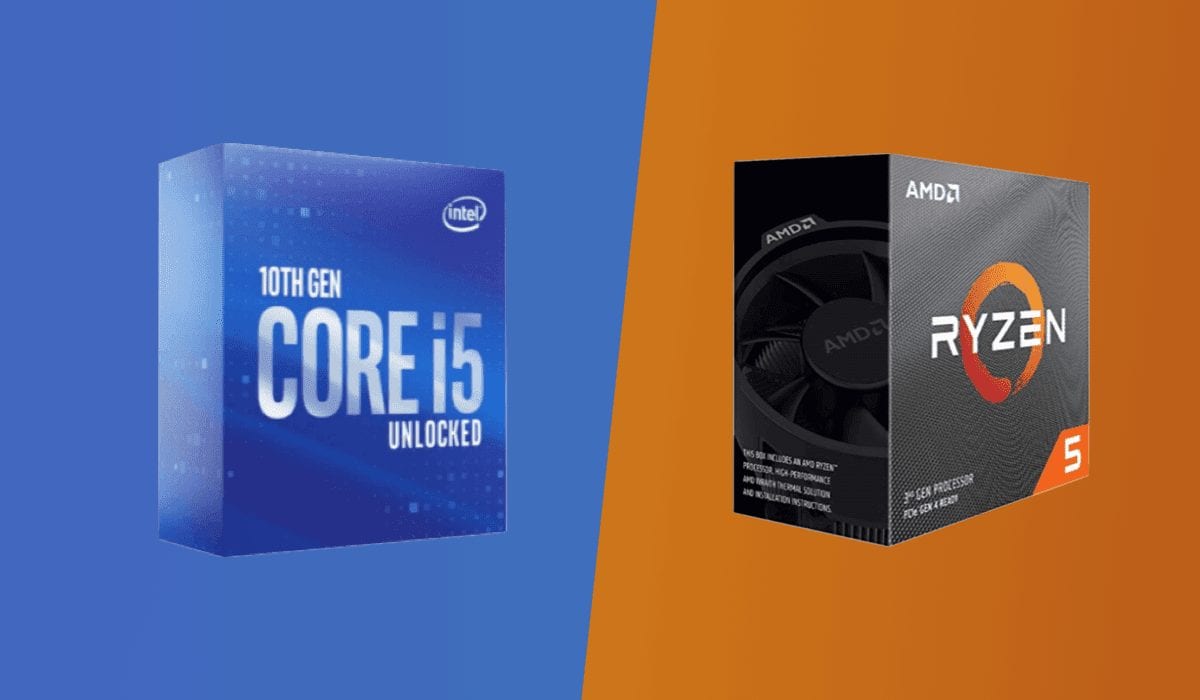 Every year there is a brand new generation of CPUs that become the mainstays and serve as a great blend between performance and price.

After all, not everyone is looking for the most powerful CPU every time – maybe they just want a simple and usable option that does what they need it to do – whether it be gaming, streaming, a workstation or a blend of all!.

This year, however, there are two great mainstay, mid-market options for CPUs for you to choose from; the Ryzen 5 3600 and the Intel Core i5 10600K.

But what are the practical differences between the two, and which one should you pick?

Comparing CPUs using benchmark comparisons is one of the easiest ways to try and reach a decision about which would be best for your needs.

Places like cpu.userbenchmark.com provide excellent data, as well as being able to compare user scores about which is best.

CPU User Benchmark ranks the Ryzen 5 3600 as being generally better, with a higher ratio of approval from users despite the fact that the Intel Core i5 10600K seems to offer up higher specs.

The Intel Core i5 10600K offers up a pretty sizable upgrade from its previous iterations when it comes to clock speed, operating at a base speed of 4.1 GHz, and boosting up to 4.8 GHz straight out of the box without any overclocking. This makes it able to work extremely well no matter what task you give it; gaming, video editing, or general computer usage, this CPU is able to handle any kind of workload.

The Ryzen 5 3600, meanwhile, is a bit slower. With a base clock of only 3.6 GHz, it isn’t able to handle the same processes that its Intel counterpart can manage, despite its boost clock speed of 4.2 GHz. If you want to get into some serious gaming, you will likely need to overclock it a little bit yourself.

Just from looking at this, it seems like it should be pretty clear cut, so why would you pick the Ryzen?

One of the big setbacks with the Intel Core i5 10600K is the lack of any kind of sizable L3 Cache. The L3 Cache is vital to the smooth and speedy running of your CPU and acts sort of like the personal RAM for your CPU.

Your CPU can’t undertake any instructions or computations without first having them queued by your L3 Cache, so the bigger the cache size, the faster and more efficiently your CPU will process data and tasks.

Despite its monstrous clock speed, this is where the Intel Core i5 10600K falls short of its competitor; the Ryzen 5 3600 offers a huge 32 MB of L3 Cache, allowing for noticeable increases in effective speed.

Keep in mind, though, that a higher L3 cache will only really be made apparent when doing certain tasks. For example, if you are video editing a variety of high quality video clips and need fast response time, then a bigger L3 cache is absolutely essential. For regular 1080p, or even 1440p, gaming, it isn’t as vital.

Still though – the Ryzen 5 3600’s L3 Cache is currently one of the highest available on the market, so if you are looking to use your CPU for other applications besides gaming, it should be a serious contender.

Trying to make a decision between the Ryzen 5 3600 and the Intel Core i5 10600K can feel pretty difficult, especially when the specs seem to be so different.

However, one thing to note is that the Intel Core i5 10600K is only just releasing, meaning that there has not been a lot of time to perform accurate benchmark comparisons against other cards.

This is likely why sites like CPU UserBenchMark.com have yet to aggregate a large enough number of votes for the Intel Core i5 10600K; there simply aren’t enough people with the CPU yet to make an informed opinion.

Ultimately though, the key difference between the two CPUs comes down to what you want to do with it.

If you are looking to game at the highest possible settings for as many years as possible, and don’t so much mind about using it for things like high-end video editing, then the Intel Core i5-10600K is likely the better option.

If, however, you want something a bit more multipurpose, then the Ryzen 5 3600 should be your go-to. Additionally, the Ryzen 5 3600 offers PCIe 4.0 support, whereas the Intel does not, which should definitely factor into your decision making. PCIe 4.0 is faster and more efficient, making for a more powerful card.

So, if you are just replacing your CPU, check your GPU first, so as to make sure that you don’t end up with a final setup that doesn’t work perform optimally together.