Full vs Semi vs Non-Modular Power Supplies: Which Is Best For You? 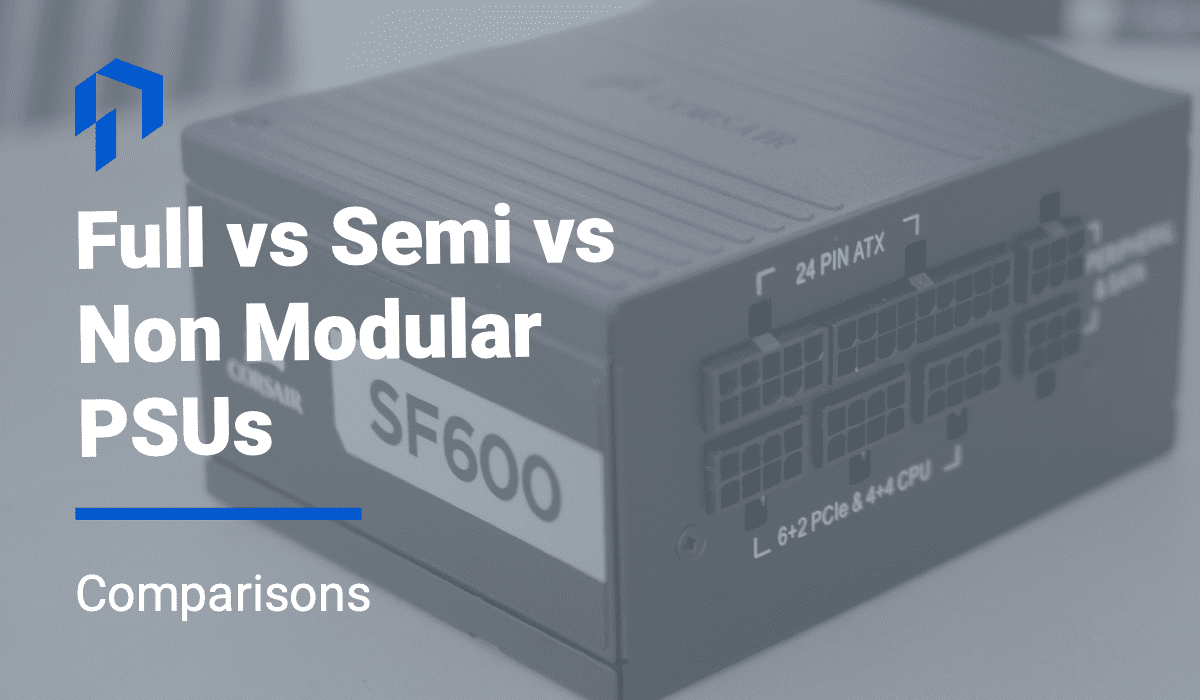 A power supply is the hidden heart of a computer. While it’s often a boring task for first-time builders – putting the money toward a killer graphics card or new CPU is always more fun – it’s one of the most important parts to get right. Otherwise, you run the risk of damaging the rest of your system, ruining your aesthetics, or not even being able to get the build on.

One of the biggest decisions to make for this part comes in the field of modularity. Modular designs have all the wires separate from the power supply brick, allowing for customization and convenience. Non-modular designs all come pre-connected, meaning there are more wires to deal with, but setup may be easier. Semi-modular designs lie somewhere in between.

Everyone has a preference, and there’s no wrong answer. Let’s get into the specific differences between the three and the benefits they all hold.

To start, airflow tends to be much better while using a fully modular PSU. While the other options almost inevitably have some wires that get in the way of air, fully modular ones don’t. You know that pile of unused connections that you try to find a corner of your case to hide in? With a fully modular option, you just take them out and put them in a nice little bag.

They’re a great step up that really feels more professional. It also helps with the aesthetics of your build; every wire has a purpose, and you often have more control over what route they’ll take. Plus, if custom sleeving is your thing, a fully modular option will make that a lot easier.

Now for the common downsides. First, you must plug in every wire. Even though every computer in existence will use, for example, the main 24-pin connector, you need to put the manpower in to connect it. While it’s a small note, it can get somewhat frustrating if you have a lot of connections to work through. They also tend to be slightly larger than non-modular options, although they still follow the normal forms for power supplies. This is mostly something to note if you’re going for a space-constricted build.

Finally, the price; for all the extra convenience you get with these, you’ll end up paying more. High wattage and high-efficiency models can easily run for almost double their non-modular counterparts.

Semi-modular power supplies are a great middle-ground for most users. They work exactly as the name implies; some of the wires are fully removable, while others are rigidly connected like in a non-modular option. Normally, the consistently used cables like the 24-pin connector, 8-pin CPU connector, and one or two more are the non-removable options, but this varies between models.

These are meant to give users the basic benefits of fully modular options while being cheaper and offering a slightly easier setup. In exchange, you lose out on the custom cabling options and may need to deal with an extra wire or two.

You still retain the option to take all those unused connections and store them outside of the build, improving airflow and reducing dust collection. For builders looking to strike a nice balance between usability and value, semi-modular options are hard to beat.

Non-modular power supplies have every wire soldered to a single circuit board, making removing them impossible. These are cheaper to produce and extremely common; anyone using a pre-built PC from a major manufacturer like HP or Lenovo is almost certainly running one of these. Until just a decade or so ago, they were also the only option on the market.

The unfortunate downside of non-modular power supplies is that, inevitably, you’ll be left with extra wires. Rather than removing them from the case – like you can with semi-modular or fully modular options – you have to bundle them up somewhere inside. Hopefully, your case has a space to hide them away, but that may not be an option if the case is small or you have lots of extras.

This nest of wires easily collects dust, prevents customization, and often interrupts airflow. Plus, if your case doesn’t have a hide-away hole, it plain doesn’t look good. With the negatives out of the way, it’s important to note that most builds will still be fine with a non-modular option. Especially for people on a tight budget, you’ll find the best bang for your buck here. You may have to do a bit more upkeep on your PC to reduce temperatures – you can check out our guide on doing that here – but it’s hard to beat the price.

Non-modular, semi-modular, and fully modular options are all still power supplies. There are plenty of similarities between the three, meaning that there aren’t that many categories where the differences are noticeable. If, for example, you’re most interested in energy efficiency, you can find highly rated models across any of them. Wattage, form factor, and extra features like self-testers all follow this trend as well.

So, what are the categories where you can notice the most differences between the three? Let’s take a look.

As alluded to earlier, there can be drastic price differences between the three options for power supplies. Generally speaking, fully modular options are the most expensive, followed by semi-modular, then non-modular. This is largely due to manufacturing costs rising as more modular options are added.

Semi-modular options tend to offer the most value for their price. They perfectly balance a lot of the drawbacks and benefits of fully modular power supplies while meeting most builder’s needs for a cheaper cost.

It’s important to note that there’s not a notable difference in quality between the three options. A non-modular power supply is cheaper than a fully modular one because of circuit boards and connections, not because it’s made from lower-quality materials. Differences like that largely come down to the manufacturer. For a quick recap:

Aesthetically, fully modular power supplies take a clear win. The ability to take away extra wires instead of just hiding them is a game-changer for case space. However, semi-modular options can also do this. What really sets fully modular options apart here are cable sleeves.

While browsing the web, you’ve likely seen pictures of beautiful builds featuring custom-colored wires that match perfectly. This is only possible with a fully modular power supply, as it allows the wires to be removed and re-sleeved.

Especially if you’re trying to match everything in your build, or even if you just have a case with a window, consider upgrading to a modular option.

This category technically pulls double duty, as it focuses heavily on airflow. Put simply, the better air can flow through a PC case, the cooler it will stay. You can read about more specifics in the thermal throttling part of this article, but that’s really all you need to know while choosing a power supply.

Non-modular power supplies have more physical objects getting in the way of airflow. The amalgamation of wires is particularly bad for airflow because it traps dust and hot air, too. While it won’t have the largest effect on your PC temperatures, it can be noticeable.

Instead, semi-modular and fully modular power supplies deal with this problem by just removing the wires. This allows for more empty space in the chassis, leading to better airflow and lower temperatures.

It’s important to note that the heat creation of each type of power supply does not change. That relies mostly on its efficiency, not how the wires are connected. If you’re going to use all or the majority of the available wires, go ahead and save your money with a non-modular option.

There are plenty of factors that go into choosing a power supply, and some are arguably more important than modularity. However, the differences between the three can have long-lasting effects on multiple parts of your system, so it’s a good idea to devote some time to it.

For most consumers, a semi-modular power supply is likely the best option. They retain a host of options, allow for just enough customization, and hit a sweet spot in price that’s hard for fully modular ones to meet. Of course, there are specific use cases for either side that can change that recommendation.

Consider your budget, the size of the computer, and what connections you need before finalizing any decision. Finally, be sure to take into account wattage and efficiency, too. They’ll have a much bigger impact on performance than wire connections.

Looking for more information on choosing a power supply? We’ve got you covered with a host of guides to find the best choice for you: