Endgame XM1/XM1r vs Roccat Burst Pro: Which is Best for You? 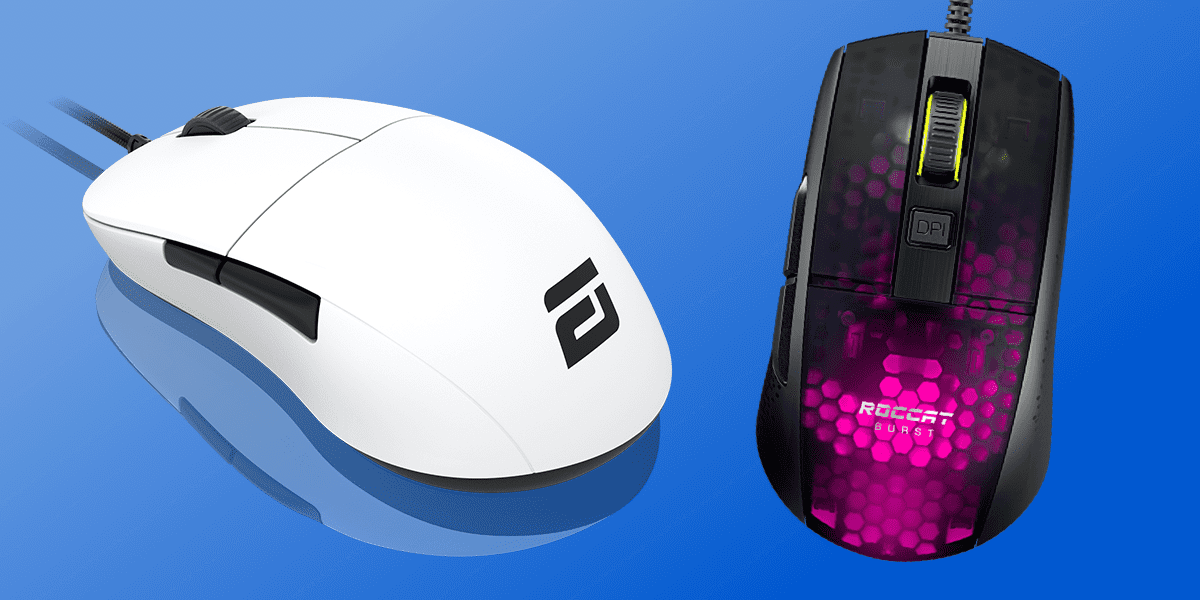 When searching for computer gear, peripherals are often overlooked, despite being a crucial part of the equation. Mice especially are essential to your computer activities, which require precise and reliable tracking of your movements and their accurate transcription on your screen. A great mouse is a well-built mouse that will last, features good hardware, and fits your hand perfectly. But the task of choosing a mouse can sometimes be daunting. That is why we are comparing in this guide two very similar mice, the XM1 by Endgame Gear and the Burst Pro by Roccat, to help you decide which one is better suited for you.

Both are lightweight quality mice priced at $59.99 MSRP. The weights are 70g for the XM1 and 68g for the Burst Pro. Roccat released their mouse end of 2020 while the XM1 was released mid-2019 and is now being refreshed into the XM1r without substantial changes.

We compared various aspects of both mice, to show you the advantages of inconvenient of each and help you decide which will be best as your 2021 new mouse: we will first review the general build quality of the products, then several components such as the cable, feet, coating, buttons, sensor, and software. We will check out the aspect of each mouse and finally review their shape, one of the most important features of a mouse. Finally, we will explain what the best use cases of each of the products are.

The two mice are sold in a premium-looking packaging, well Protected and with the user manual. The Burst Pro comes with a pair of replacement feet, which is always useful if you are to customize the mouse cable for example.

We want mice that will last in time, mice with great construction quality. Both the Burst Pro and the XM1 deliver, featuring a prefect build quality despite their lightweight design. We could not find any rattling, wobbling, flexing or unwanted slack in our samples.

Mice cables can be made of different materials. We can differentiate rubberized cables from paracord cables. Rubber versions tend to be stiffer, and drag more with the mouse, while gliding very well on the mousepad and being easy to clean. Paracord cables are using a lightweight nylon braided coating instead of the rubber coating. Depending on the shielding and the size of the electrical wire, they tend to be much more flexible.

The XM1 and Burst Pro both have paracord-like cables, although different. The XM1 cable is lighter and more flexible, it bends anyway we want. The Burst Pro cable is more rigid and will tend to follow the mouse on a longer length.

The XM1 cable is like non-existent, it cannot really be felt while dragging the mouse around, but it might get in the way more easily as it does not move more than necessary.

Burst Pro cable might be felt a bit at times, but as a bigger portion of the cable is following the mouse, it is never getting in the way of the mouse movements.

This item ends up being personal preference.

Mouse feet, also called skates, are pieces of material situated below the mouse. They will define how well the mouse glide on a surface.

Both mice have PFTE feet, but they are heat-treated on the burst Pro. PFTE is a very low friction material and is considered as one of the best for mouse skates.

The layout of the skates is different, two large skates for the burst Pro and four little for the XM1. They look thinner on the Burst Pro, but it might be due to the different treatment applied to the material.

The XM1 have a very smooth, fast, and even gliding on all directions. The burst Pro glide feels different on the X and Y axis. Movement on Y axis seems more resistant, slightly scratchy. From the user feedback we gathered, it might depend on the mouse sample. In any case, it does not impact in-game tracking, it is mostly about sound and feel when trying the mouse.

XM1 has the same coating all over the mouse, it is matte plastic that tend to keep fingermarks. The Burst Pro have some textured coating on the sides and some more classic coating on the top and main buttons. The side coating of the burst Pro is not an added rubber coating but just texture within the plastic, helping to grip the mouse. It is a nice design touch from Roccat, it feels great in the hand even when sweating.

Side buttons and mouse wheel

Burst Pro side buttons are easier to reach and bigger. XM1 buttons are more hidden in the curve of the mouse and much less prominent. The click quality is fine on both mice.

Both mouse wheels are excellent. The mouse wheel buttons feel very similar, but the rolling is easier/faster on the Burst Pro, XM1 wheel is more resistant.

Both mice have homogenous and good quality M1 and M2 buttons. XM1 uses OMRON (KHAIL for XM1r) switches while the burst Pro has Roccat’s titan optical switches. Beside the marketing, the main difference here is the sound.

XM1 sound like your classic and crisp high-pitched “CLIC”, while the Burst Pro buttons sounds like a lower “THOCK”. The difference is not in the loudness of the clicks. They just play in different frequencies. On a functional level, XM1 buttons are bouncing more, making them superior for spam-clicking. We preferred the Burst Pro buttons for their lower-pitched volume and their more tactile clicking, but others may be more into the sharp click sounds of the XM1. This item is mostly personal preference.

As for side buttons, Burst Pro’s are easier to reach and bigger. XM1 side-buttons are more hidden in the curve of the mouse and much less prominent. The click quality is good overall.

Both mouse wheels are excellent. The mouse wheel buttons feel very similar, but the rolling is easier/faster on the Burst Pro, XM1 wheel is more resistant.

Both mice feature a DPI switch. XM1’s switch is located under the mouse with a colored LED indicating the DPI state. While the LED is a nice touch, the burst Pro DPI switch is situated on top of the mouse and can be used as a supplementary button (It is assignable in the software).

The XM1 sensor is the PMW 3389 and the Burst Pro feature a modified version of the same sensor. These are industry-standard sensors which work very well, making both mice feel very precise and snappy. The XM1r (newer version of the XM1) comes with the PAW3370 sensor a newer version that performs flawlessly as well.

Configuration software is available to download for both mice. It is not necessary at all time as the mice feature embedded memory, allowing their configuration to always remain stored.

The burst Pro default settings were not really working for the mousepad we used, some of the movements were missed. Fortunately, the lift-off distance can be adjusted in the software (for both mice). Changing it solved the Problem.

Both mice come in white and black variants. The Burst Pro feature a very nice LED lightning that shines through the coating of the mouse, revealing the honeycomb design used inside for the mouse structure. The XM1 does not feature LED lightning, but the XM1 RGB variant does at the cost of a bigger weight. The XM1r is available with transparent covers as well.

We are now reaching the most important part of a mouse: the shape. You can have the best mouse in the world, if it does not fit your hand, it will not be a great mouse for you.

Both mice look similar in size and shape, but they are very different in the hand. The upper part width is slightly smaller on the Burst Pro, but it has a much more Prominent back bump. As a result, if Roccat’s mouse can appear smaller at a quick glance from above, it feels much bigger in the hand. The XM1 has inclined sides compared to the flatter sides of the Burst Pro.

What mouse should you choose then? Well, it depends on your hand size and grip type. They are three main grip types which define how one is holding their mouse: Fingertip, Claw and Palm grip. [Include a link on PremiumBuild explaining the grips with pictures => MOUSE GRIPS EXPLAINED article?]. Because of their shape, both these mice are reference for claw grip users. But the XM1 could be used with fingertip by someone with big hands. As for claw and palm grips, it depends on your hand size. The XM1 appears to be more suited for smaller hands, while the Burst Pro could be the perfect fit for big hands.

Both mice are very solid lightweight claw grip mouse choices, although they can fit other grip styles. They feature excellent build quality and sensor, very good cables, feet, and buttons. We can recommend you the two products, whether you are a hardcore competitive FPS gamer or a more casual player. You can find the final summary of our comparison below:

Reasons to choose the Roccat Burst Pro: You want easy-to-reach side buttons, tactile main buttons with low-pitched sound, a cable that will not get in the way, great side coating, RGB lighting, a DPI/assignable button on the top of the mouse.

Reasons to choose the Endgame Gear XM1: You want high-pitched and crisp main buttons, a feather-like cable, excellent and even gliding of your mouse, inclined sides.

Finally, here is a sheet explaining how we see these mice fitting different hand size and grips:

In the cells is what mouse we would recommend. Green means the mouse is likely to be a perfect fit, red means you might need a little time to fully get used to your new mouse.

We hope this article helped you finding out whether the Endgame Gear XM1 or Roccat Burst Pro will be better suited for you!

View the XM1 on Amazon
View the Burst Pro on Amazon