Ducky One 2 Mini vs Anne Pro 2: Which 60% Mechanical Keyboard is Best? 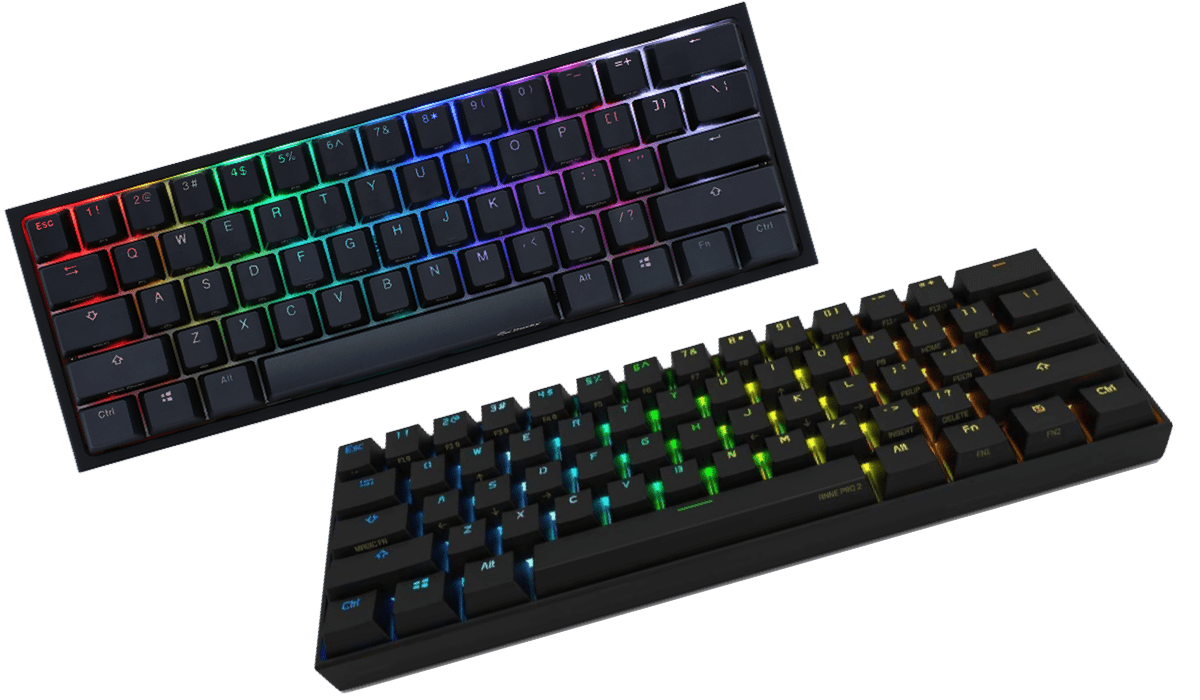 As mechanical keyboards have become the standard for gaming and for many office/productivity users, the classic full-size form factor with an integrated numpad and F-row has slowly grown less popular. The freedom that comes with mechanical keyboard choices and the amount of time we spend on our computers during the ongoing pandemic means that our input devices (mouse, keyboard, monitor) have become even more important. So, to save space and keep a clean desk, many buyers are opting for a 60% keyboard.

As a reminder, or an introduction for anyone new to mechanical keyboards, we are looking for the right switches (clicky, linear, or tactile), good quality control and durable construction, and any specific features that will make our keyboard our best friend. Some of these features might be USB-C or NKRO for speed-typists or gamers. Be sure to think about your needs before picking a keyboard as no matter how high quality it is, if it doesn’t satisfy your needs, it isn’t the best keyboard available for YOU.

The 60% form factor (the alpha keys and main modifiers) maintains the most important typing keys while removing all ‘extraneous’ options. Within the growing popularity of the 60% mech keyboards, two particular models stand out as common standards and two of the most popular choices: the Ducky One 2 Mini and the Anne Pro 2. Neither are the most ‘budget’ boards available and there are cheaper options out there, but nor are they the absolute most expensive. Both are interesting and have plenty of strong features, making it a difficult choice to decide between the two.

Let’s take a look at each one and make the case for why it’s the superior ‘mech keeb’ before rendering our verdict and recommending the better 60% board:

The Case for the Ducky One 2 Mini

Ducky is a well-known enthusiast brand mechanical keyboard company, focusing on basically only keyboards. Compared to brands like Logitech, Steelseries, or Razer that take more of a ‘do-it-all’ approach, Ducky lives and breathes keyboards. While for a long time the brand focused on full-size, then TKL (tenkeyless) form boards, the Ducky One 2 Mini has made a splash as a top-notch choice in the 60% domain. There are plenty of reasons to buy it, but there’s a few that stand out above the other factors:

This reason is pretty straightforward and really one of the most important reasons for choosing the Ducky One 2 Mini. The Ducky name has come to mean quality, in terms of customer service, build-quality, quality control, and basically any other type of quality you can think of. Buying Ducky just means you know you’re getting a quality board backed by a strong reputation and plenty of brand recognition. There’s no niggling fear you’ll get a counterfeit or sub-quality product, because Ducky doesn’t do sub-par. The One 2 Mini is the same, it has a strong chassis that is well-designed, doubleshot PBT keycaps, and uses a detachable USB-C cable. Strong features backed by a strong reputation, it doesn’t get much better than that.

This second reason is becoming less and less important as other switch-makers improve their products, but Cherry MX switches are still king when it comes to quality and consistency. Outside of boutique switches that are only available in DIY keyboards, Cherry MX switches are the best mainstream switches you can buy. Kailh and Gateron have made big strides, and perform admirably given their lower price points, but the quality control and consistency from Cherry are just too tough to beat.

Cherry MX maintains a decent lineup, and the Ducky One 2 Mini can be found with almost all main variations like Red, Brown, Blue, Black, and Speed Silver (as well as potentially Pink or Silent Black), meaning it has just about whatever a mainstream typist needs. It might not come with exotic options like Box Navy/Jades or Holy Pandas, but if you want a switch like that, the Anne Pro 2 won’t work either and DIY is the only way to go. Bottom line: Ducky chose Cherry MX switches for a reason, and the reason is that they don’t disappoint.

This last reason is a growing advantage that more and more mechanical keyboard companies are including. While the Ducky One 2 Mini doesn’t support complete customization and programmable keymap (we’ll discuss more below), Ducky does offer software for some custom macros and basic modifications. Ducky Macro 2.0 is a stable piece of software and because we’re again talking about Ducky, pretty safe in terms of trust. Compared to other software offerings out there, which are sometimes questionable in terms of privacy and safety, Ducky’s software is a breath of fresh air.

The Ducky One 2 Mini ranges in price from around $100 to more than $200 for certain special editions, like the yearly ‘zodiac’ version of each.

The Case for the Anne Pro 2

The Anne Pro 2 is interesting because for a long time, it was essentially a catch-all for the 60% form factor, as long as the keyboard had Bluetooth. Anne Pro wasn’t really a brand, it was just a term used to describe the keyboard. Some of this persists today, with sellers using the name Anne Pro 2 to mean 60% in the standard 61-key layout. This means that buyers have to be careful and pay attention to the description and the reviews, but also means that if you find the right one, you might get a great deal.

Never has this argument been more relevant than today. As wireless technology has improved in terms of speed and stability, more and more buyers are looking to remove cables from their setup for looks and convenience. For a long-time, the last anti-wireless holdouts were gamers because of the increased latency. While this is still a potential problem with the Anne Pro 2 due to its use of Bluetooth rather than 2.4GHz connections like Logitech for example, but because of the wired or wireless options, the Anne Pro 2 can be used wirelessly for everything except gaming, when you can connect a USB-C cable to avoid any lag. The two options are a great upgrade compared to the Ducky One 2 Mini, which does not have any wireless connection options. Even for non-wireless users on a main PC, the pervasiveness of Bluetooth means the Anne Pro 2 can serve as a stand-in on a tablet or cell phone if you find yourself minus a PC but needing to do some serious typing. The battery is a pretty good size at 1900mAh and easily rechargeable via USB-C, meaning the Anne Pro 2 is a true wired/wireless dual threat.

One of the biggest pushes in mechanical keyboard building communities is total control over the keymap and RGB illumination. Many builders turn towards open-source offerings like QMK, but even prebuilt keyboards are starting to get into the programmable world by bundling software that gives firmware-level control. Unlike the Ducky One 2 Mini, the ‘obinskit’ software gives that full level of control, including but not limited to just macros. Obinskit is a general software that is common for Anne Pro/Anne Pro 2’s as a customizing interface, but is not as common as the QMK software. Still, it is more reliable than random firmware controls that sometimes come with keyboards bought from AliExpress, even if it might be slightly more suspect than something from a major manufacturer like Ducky. If customization and programmability are important to you, being able to go deeper is a major feature and many reviews for both the Anne Pro 2 and Ducky One 2 Mini mention it as a great asset or major missing piece, respectively.

This argument is pretty subjective, as many users will not be looking for too many choices. But for an experienced typist, have a wealth of options is always appreciated. The Anne Pro 2 might not use the Cherry MX switches like the Ducky One 2 Mini, but it does offer plenty of options from both Kailh and Gateron. While Cherry is the most popular, and for good reason, Gateron and Kailh have made huge strides in providing high quality options. Some in the mech keyboard community even prefer some offerings, like Kailh Box Reds or Gateron Browns, that have achieved high marks for their price-performance ratio. If you had to choose between Cherry and its competitors, Cherry probably wins, but the greater diversity of options for the Anne Pro 2 is a major draw for someone that isn’t looking for the very traditional Cherry MX Red and want to try something new.

The Anne Pro 2 also floats around in price, ranging from down near $75 on sale to right around $100 normally. This puts it anywhere from 15-25% cheaper than the Ducky One 2 Mini, so a not inconsiderable amount for something that has a few more features to offer!

Both keyboards are really strong competitors and are totally viable buys. For your average user, both keyboards will do everything you want and more. Because of its slightly lower price and inclusion of even more features, we give the slight edge to the Anne Pro 2. The wireless capability and fully customizable keymap are great features that help the Anne Pro 2 standout, even when compared to the very awesome Ducky One 2 Mini.

If, however, you just want a simpler, super high-quality and ultra-reliable keyboard, the Ducky One 2 Mini might be the better choice. In either case, no one can fault you for picking one over the other as long as you do it for reasons that match your needs.

When it comes to this 60% Showdown, it looks like the Anne Pro 2 is the winner by TKO, but only by a hair and without anything bad to say about our runner-up, the Ducky One 2 Mini.