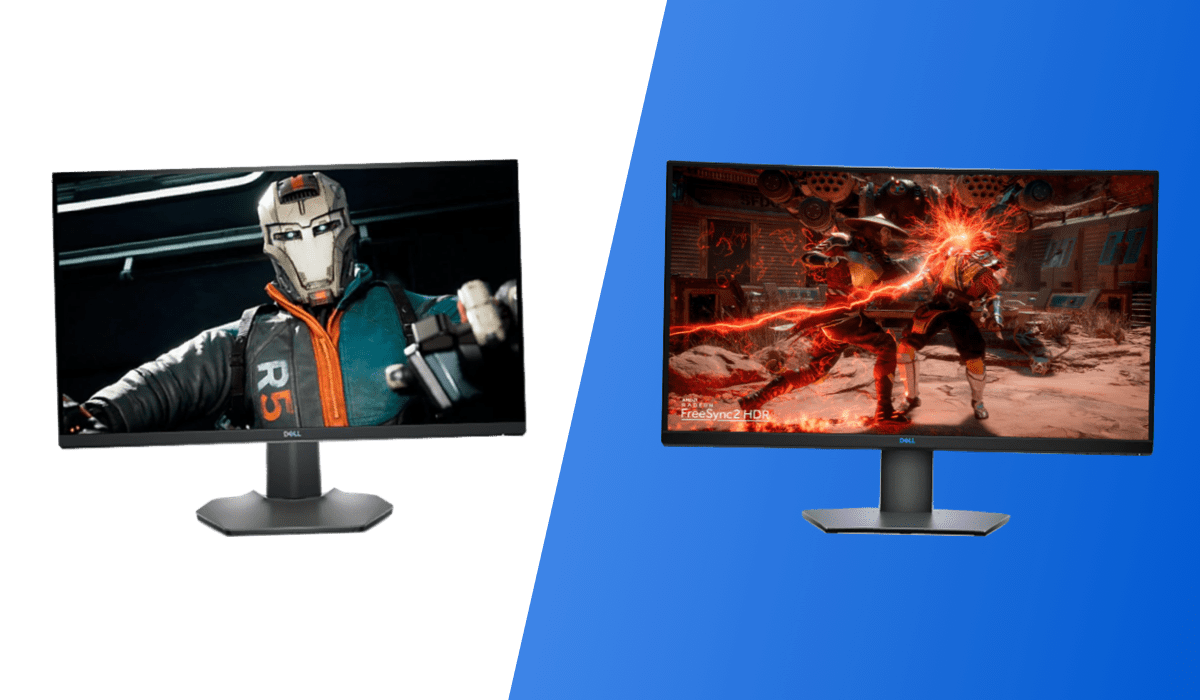 According to statistics recently released by AMD, during their presentation for the announcement of their new Radeon RX 6700 XT GPU, 1440p monitors have seen the largest increase in sales than any other resolution; while 1440p monitors with refresh rates above 100 Hz have also seen a growth of 98%, year over year.

It is because of this growth, that monitors featuring the aforementioned resolution and refresh rate are seeing significant price decreases. Indeed, 1440p monitors have become much more affordable, to the point that the current hardware needed to run them (at high enough framerates) is far above the expense range of the monitors.

But is the S2721DGF worth its current extra cost – especially given that it has a smaller screen – or does the S3220DGF display enough value to be considered the superior monitor between the two? To find out, we will compare both these options, in regards to manufacturer specifications and real-world benchmarks, and come to a conclusion on monitor is better suited for your build and preferences.

Being a somewhat older model, the Dell S3220DGF has a thicker screen (3.2 inches = 8.1 centimeters) with a thinner – yet still well supportive – stand, and a posterior cover which is rather plain: a grey monochrome design that extends to the back of the stand. On the other hand, the Dell S2721DGF has a 25% thinner screen (2.6 inches = 6.5 cm) that makes it more appropriate for wall mounting, and the back of the monitor is textured; even including an illuminated accent running across the perimeter of the vents.

Both monitors have very thin borders that measure just 0.3 inches (0.7 cm), making them suitable options for multi-monitor setups. Additionally, both have a hole cut out on the stand, for better cable management.

Beauty may be in the eye of the beholder, and both monitors do have a similar anterior design, but because of its lighting display, its thinner screen, and its more stylish posterior profile, we must give the edge to the S2721DGF.

The 1440p 165 Hz resolution & framerate combination that these monitors feature is identical, though it must be mentioned here that even some of today’s best hardware components will hardly be able to take full advantage of these metrics, at least with regards to gaming. Even the mighty Nvidia GeForce RTX 3080 was only able to reach 153 FPS on average (18 tested games), according to benchmarks carried out by Techspot – which means that both monitors do allow for a performance leeway, so they will still be useful even after a potential future PC upgrade.

The first aspect in which the difference between their panels begin to play a significant role in terms of performance, are the viewing angles of the display. This is a particular strong point for IPS panels, and an inherent downside of VA panels.

The Dell S3220DGF’s screen has a curvature of 1800R, which means that its circumference has a radius of 1,800 millimeters; or about 70.87 inches. In terms of its horizontal viewing angle – which, arguably, is the angle that matters most, since most monitor setups are meant to be viewed at an eye-level – the S3220DGF’s colors begin to washout from just 28-and-29-degree angles (left & right), the colors begin to shift at 48-and-53-degree angles, and dark shades begin to washout from just 13 and 15 degrees.

In contrast, the Dell S2721DGF, with its non-curved IPS panel, sees a color washout from the left at an angle of 46 degrees, and from the right at 47 degrees. Colors begin to shift at 52 and 55 degrees, and the dark shades washout at an impressive 70-degree angle, from both left and right.

The differences are not as pronounced for the vertical viewing angle, where both monitors perform rather poorly, but are still passable.

Because of its superior vertical viewing angles, the Dell S2721DGF can be used for those looking to share their monitor with others, play multiplayer games with friends in person, or make use of multi (2+) monitor setups.

Now, where the IPS panel fails, but the VA panel excels, is the static contrast ratio.

In fact, even for an IPS panel, the Dell S2721DGF has a disappointingly low native contrast, that measures at just 882 : 1; more than 10% less than its advertised 1,000 : 1 metric. This means that its blacks will look more like grey, especially when viewed in the dark.

On the other hand, the Dell S3220DGF has a static contrast ratio of 2,953 : 1; once again lower than the advertised 3,000 : 1 specification, but this will vary between units and the difference is low enough to be within the margin of testing error.

If you intend to make use of the HDR capabilities of the monitor, then the Dell S3220DGF will better gain your favor, but for those that care little about HDR – and will thus hardly use the functionality – the Dell S2721DGF will be glare-free during SDR use, even in bright surroundings.

Overall, the Dell S2721DGF does have a slight edge, but the difference is small enough to be considered unnoticeable.

Response times are perhaps the area in which the Dell S3220DGF disappoints the most, as its benchmark results are far beneath what most gaming monitors can perform.

Both Dell monitors have three overdrive settings: Fast, Super Fast, and Extreme. Increasing the overdrive setting means quicker Grey-to-Grey – or motion picture – response times, but as a result the overshoot error increases (which is how far a pixel transitions past its desired color, resulting in the blur trail following behind fast moving objects, a phenomenon also called “ghosting”).

The Dell S2721DGF offers a full array of ergonomic flexibility, as it can have its height adjusted by up to 130 mm (~5.12 inches), it can pivot into either landscape or portrait mode (in either left or right direction), it can swivel by up to 45 degrees (in both left and right directions), and it can tilt forwards by 5 degrees & backwards by 21 degrees.

The Dell S3220DGF can adjust in height by up to 137 mm (~5.39 inches), it can swivel (to the left or right) by 30 degrees, and it can tilt forwards by 5 degrees & backwards by 21 degrees. However, because it cannot pivot in either direction, the S2721DGF leads in this category as well.

Both monitors are VESA mount compatible, and can be mounted via a 100 x 100 mm VESA Mounting Interface Standard (MIS).

These Dell monitors have excellent power efficiency. The S2721DGF consumes only 32 watts of power, and the S3220DGF consumes just 30 watts on average. The maximum power for the former is 90 watts, and for the latter is 100 watts. No major differences, so once again a tie must be declared.

The only reason why we give the Dell S2721DGF the advantage in this category is its one additional USB 3.0 port, while acknowledging that it may, ultimately, not make a difference for most users.

When it comes to features, both these options are quite limited, including the standard Flicker-free technology, low blue-light filter, an on-screen timer & frame counter, and AMD FreeSync technology (FreeSync 2 for the S3220DGF and FreeSync Premium Pro for the S2721DGF). Both monitors are also Nvidia G-Sync compatible; which only works for when the monitors are connected via a DisplayPort.

The reason why we recommend the S2721DGF over the S3220DGF, for competitive gamers, is solely due to the faster response times. Depending on the genre, motion blur can be quite distracting; and distractions generated by hardware limitations should be the least of your concerns while competing. At 60 Hz the motion blur worsens, so we definitely would not recommend this monitor for fighting game enthusiasts. If you don’t notice – or care little about – the motion blur, then the S3220DGF has incredibly low input lag, so it too can be a suitable monitor for any type of gaming application.

View the Dell S2721DGF on Amazon

Next, we recommend the S3220DGF for single-player gaming, as the monitor offers outstanding value for its sub-$400 price tag. It has a curved screen that is meant to be viewed from the front, which is how it would be viewed when playing alone, and the higher static contrast is great for playing in the dark – for a more immersive gaming experience.

View the Dell S3220DGF on Amazon

Best for General Use

Finally, we also endorse the S3220DGF for general use and productivity, for many of the same reasons we do so for triple-A gaming. It has excellent post-calibration color accuracy, and the aspects where it trails the S2721DGF will hardly affect most users – and are frankly not worth the extra $85 that the latter model demands. Of course, this is a gaming monitor, and the only real deal breaker for the S3220DGF would be its response times, so, if these irk you, the Dell S2721DGF might be worth its extra cost.

View the Dell S3220DGF on Amazon