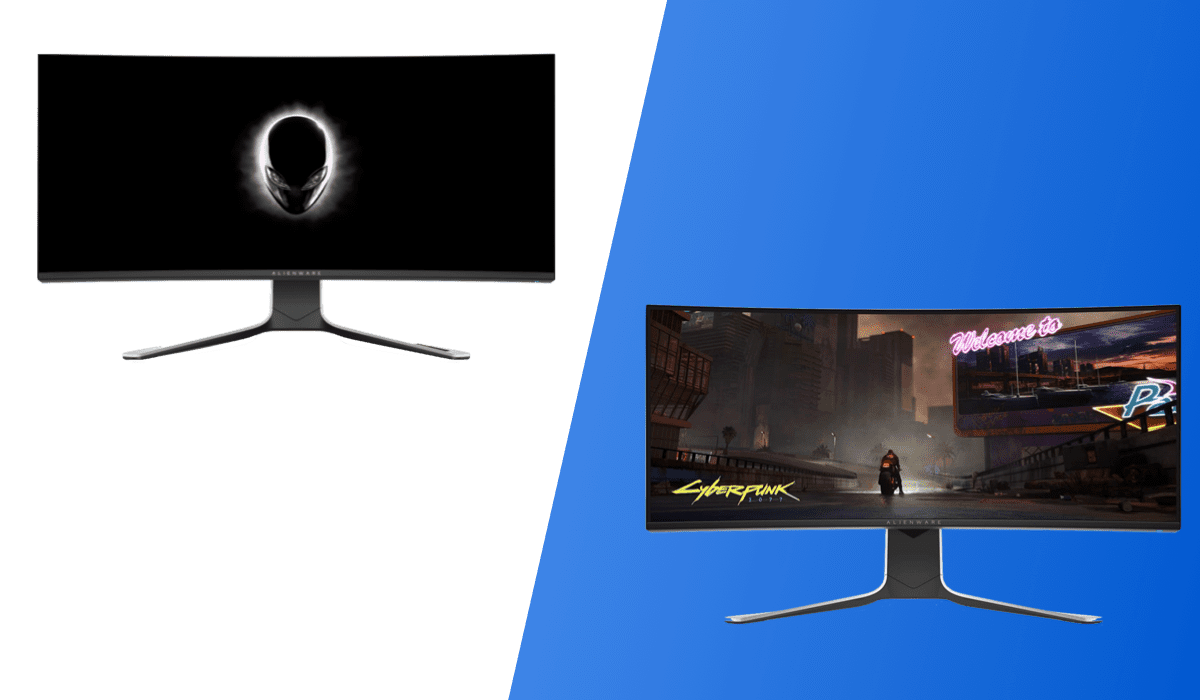 Dell’s Alienware division has long been known for their gaming centered technology. After a bout of overpriced and underdelivering devices, recent years have taken Dell back on track. Their now competitively priced monitors offer a host of features that gamers looking to complete a high-end rig will enjoy. Two of the company’s best monitor models are the AW3821DW and AW3420DW. Each is a large, curved, WQHD monitor packed full of features, ports, and quality of life additions. However, there are minor differences across almost every category for these monitors, snowballing into two highly distinct displays.

The first thing to note when separating these two monitors is their size. Both are massive, curved screens, but the difference lies in the first two numbers of their names. The AW3821DW is an incredible 38” monitor, while the AW3420DW is 34”. While monitors this size are becoming more common (although still rare!), Dell has incorporated some high-tech options that set these two monitors apart. With high refresh rates, fast response times, and enough ports to support almost every device on the market, potential buyers do not need to compromise much with either option.

One thing is certain; these monitors are not budget options. At its cheapest, the little brother AW3420DW still runs consumers just under $1000. These are high-end models that are meant for a distinct group of gamers and creators. If you are looking for the best value WQHD screen without bells and whistles, these monitors are not the best option. The details and options both monitors offer set them apart from the competition and from each other. An examination of technical aspects and additional features should help determine the key differences between the two displays.

With the AW3821DW, Dell’s Alienware set out with a clear mission: make a premium, large, gaming monitor. They largely succeeded, bringing forward one of the biggest and most feature-packed monitors available on the market today. Featuring a Nano IPS panel with a severe 2300R curve, the display is beautiful and immersive. This is helped greatly by the 37.5” of screen real estate – enough for almost no one to need a second display. The monitor is slightly above a 1440p resolution at 3840 x 1600. At this size, a 4K panel would likely be a better investment for those who care about resolution, but it is still enough pixels to create a nice experience.

Instead of upping the resolution to maximum, Dell focused on speed and features with the AW3821DW. It has a 144Hz refresh rate, arguably perfect for the resolution. While some users may lament the lack of 200Hz, the rig required to run this panel’s native resolution at a consistent 144 FPS is already rare. This is a good compromise. The monitor is also NVIDIA G-Sync ULTIMATE certified, meaning that it hits a number of qualifiers beyond normal in NVIDIA’s testing. This is thanks to the AW3821DW’s brightness, refresh rate, resolution, and so on.

The panel has a blazing fast response time of 1ms, the ideal for gaming. It also has a nice brightness of 450 cd/m2 – a necessity given the monitor’s relatively low contrast. As one of the only missteps of the monitor, it is a bit glaring. Using the AW3821DW in a brightly lit room or from extreme viewing angles can be frustrating. The rest of monitor is top of the line. Dell chose to continue with Alienware’s sharp edged and futuristic gamer aesthetic, which will put some people off of the screen. However, they have toned it down slightly, making it still an option for those who do not love the look.

Port selection is numerous, and the screen can easily be the center of an entertainment center. 1x DisplayPort, 2x HDMI, 5x USB 3.2, 1x headphone jack, and 1x audio line-out port complete the cast. As expected of a premium monitor, it also includes a VESA mount for additional mounting options. All the USB 3.2 ports are SuperSpeed, hitting 5 Gbps in transfer speed, and split between upstream and downstream support. One of them also includes power charging for extra devices such as laptops. For all the cases that this ultrawide monitor covers, expect to pay a premium.

It is available direct from Dell for $1429.99 and finding it cheaper than that is likely to be difficult. Right now, the monitor is tough to find in general at most retailers. For those looking for an alternative purchase option, they may need to pay even more. Luckily, Dell includes some nice DisplayPort wires and dongles to offset a fraction of the price.

The Dell AW3420DW breaks barriers with its size, speeds, looks, and features. For people who think the larger 38” monitor may be too big but who still want the Alienware aesthetic and offerings, this monitor is a fantastic option. Like the AW3821DW, it features a Nano IPS curved panel. Here, the curve is rated at 1900R, meaning it is less noticeable. Given the reduction in size down to a 34.1” panel, this curve is a nice change.

Otherwise, qualities like response time, refresh rate, and resolution all see a slight downgrade when compared to the larger 38” offering. Response time slows slightly to 2ms from gray-to-gray – quick enough for most games, but people who are used to 1ms times will notice a difference. The refresh rate drops to a still respectable 120Hz at the screen’s native resolution of 3440 x 1440. Given the high resolution, this slight drop-in refresh rate may not be an issue for most users – consistently getting to 120 FPS in modern games on high settings at that resolution requires a great rig. The monitor is also NIVIDIA G-Sync certified for a nice adaptive sync with NVIDIA graphics cards. Like the larger AW3821DW, contrast on the monitor could be better; this issue is amplified by the lower brightness level on the 34” model.

Alienware has packed a great number of ports into this monitor, making connectivity a breeze. Those looking for a media center monitor may want one or two more, but most users will not run into any issues. 1x HDMI port, 1x DisplayPort, 4x USB 3.1, 1x USB upstream, 1x audio line-out, and 1x headphone jack complete the port offerings. Of those 4x USB 3.1 offerings, one offers power charging for connecting devices like phones and laptops. Additional features like adjustable backlighting round out the monitor’s bold design.

There are even more similarities between the two options when it comes to support. Both monitors are backed by Dell’s exceptionally good Premium Panel Guarantee, which covers a free panel replacement during the limited hardware warranty. This covers everything, even one down to one dead pixel. The warranty mentioned also lasts three years, a respectable length of time. If something goes terribly wrong and a full replacement is necessary, Dell ships out a replacement immediately to minimize your time without a monitor.

Both monitors also come equipped with Dell’s AlienFX, a fully customizable light system from the back of the monitor. The lighting effects can dynamically sync with in-game events or be controlled separately using hard buttons on the monitor. It is a nice touch that amplifies the aesthetic without becoming overbearing.

With the specifics listed, it is clear to see that the AW3821DW is the better option across almost all categories. It has a higher resolution, larger screen, better brightness, higher refresh rate, and even a faster response time. While the AW3420DW is certainly not a bad monitor – it is still one of the best ultrawide 1440p gaming monitors on the market – when compared to the beastly AW3821DW, it falls a bit short. However, the changes are minor enough to beg another question.

That being: is the price increase for the larger screen worth it? At almost $500 more, the 38” option is a price increase of just under 50% for only a fraction of upgrades. Instead, the largest deciding factor becomes screen size. 34” is already massive, but the step up to the larger 38” screen is noticeable. Consider how you plan on using the monitor, your current setup, and how often you struggle with screen real estate. Mounting is also an important thing to note. Alienware has done a great job with the included stands, but the AW3821DW will dominate any desk it sits on. An alternative mount to lift it off the desk is not a necessity but is likely a nice quality of life change.

Outside of the rare case where a screen even larger than 34” is a necessity, the AW3420DW is a better value option for most buyers. Despite the decrease in specs across the board, the two panels are close enough to make the 50% price increase to the AW3821DW too much. Both are premium models that nail a target audience of ultrawide enthusiast gaming, however. If the AW3821DW decreases in price and increases in availability, it will quickly take the lead.

Most of the wins that the AW3821DW gets are just slight enough to warrant ignoring. Outside of specific cases, a 120Hz vs 144Hz refresh rate on monitors with resolutions this high are negligible, for example. The AW3420DW is also simply easier to find and is available at almost every large retailer. In contrast, the 38” big brother does not even have an Amazon listing. Keep an eye out for sales or particularly high pricing on the AW3420DW, however, as the prices becoming any closer calls the verdict into question.

Want to see how the AW3420DW compares to other monitors? We’ve created other guides just for that. Or find a rig to support the high specs of this monitor: