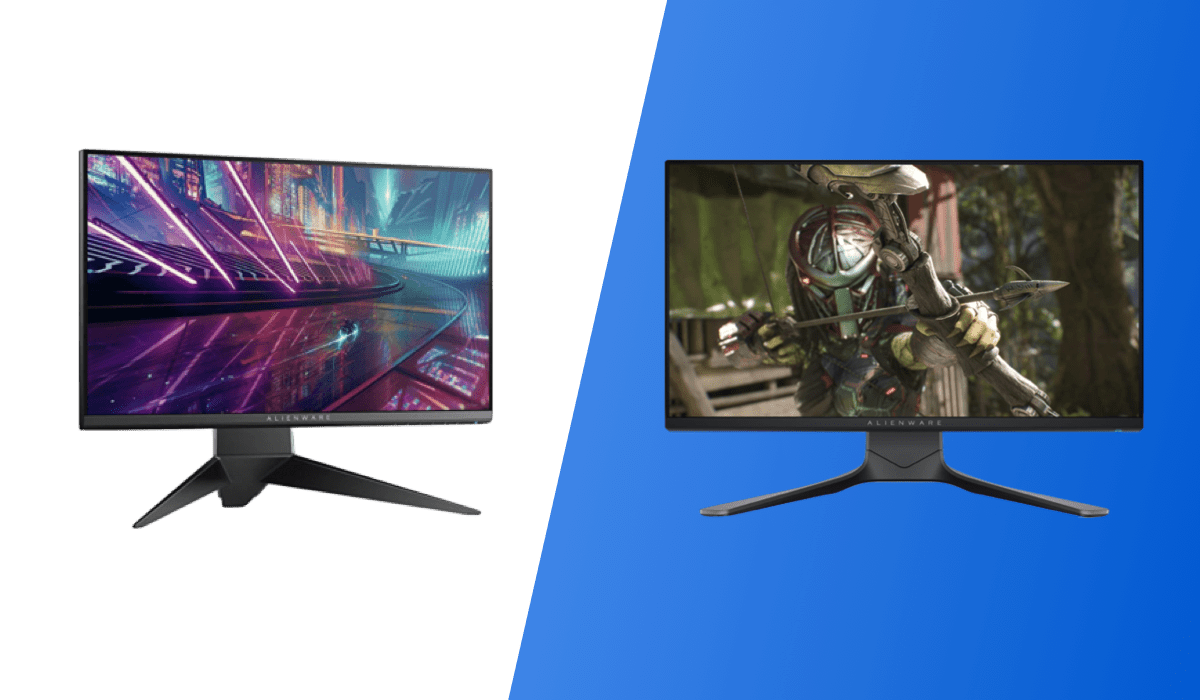 Despite the release of new-generation GPUs – from both AMD and Nvidia – that are capable of processing 1440p and 4K resolutions at high refresh rates, Full HD 1080p monitors are still as popular as ever, especially for competitive gamers. And though having a higher resolution does add a more pleasant visual elements to triple-A gaming, browsing, and watching movies, aesthetics always take the back seat when it comes competitive online multiplayer titles, where practicality is far more important. Maintaining high refresh rates together with low input lag is paramount in ensuring that one’s chances to victory or not hindered by any external (to the game) factors.

This is also why TN monitors were almost exclusively used by competitive gamers and tournament organizers alike, as these panels are known to display the least amount of input lag, and have some of the fastest response times when compared to their early IPS or VA counterparts. However, as monitor technology has advanced, these shortcomings have been expiated to a considerable degree with the release of fast IPS, SS IPS, and SVA panels.

One such example of the upgrade from TN to IPS can be found in Dell’s Alienware AW2518HF, and its successor: the AW2521HF. But, the question is, does this new monitor display the same excellent gaming qualities found in its predecessor, or is it just an attempt to capitalize on this new shift to more modern – and typically more expensive – IPS panels? Should TN monitors be sought after no matter what their current price, or are they unworthy of the adulation they receive? Let’s compare these two Alienware variants in-depth, in order to determine what type of upgrade Dell has provided with this new monitor, and, in turn, reach a verdict on which model is better worth the investment for its intended market: competitive gamers.

Staying true to the external design one can expect from Alienware monitors, both these variants have the sleek, modern, and simplistic shape that the brand is known for. The slightly older model, the AW2518HF, is a somewhat bulkier than the AW2521HF, but equally stylish nonetheless. It has a tripod stand, an all gray matte anti-glare coating, and three LED-illuminated bars, as well as an Alienware logo, on the top-right corner of the backside of the screen; which can be customized to your liking via the Dell’s AlienFX software. Not to be outdone by its predecessor, the AW2521HF also has an RGB lighting zone, in the form of an accent on the backside of the bi-pod stand, as well as the standard Alienware logo on the same top-right corner.

The borders on both these monitors are rather thin, at 5 mm for the AW2518HF and 7 mm for the AW2521HF, making them excellent options for multi-monitor setups. Of course, it must be mentioned that their respective stands are quite thick, so they do require a decent amount of desk space.

All in all, both monitors look great and can be used in any setting – whether it be a bedroom or an office.

Since both AW25HF options have identical resolutions (1920 x 1080) and refresh rates (240 Hz), neither model holds an advantage in this category. However, it must be mentioned that in order to run games at such high framerates – even at a FHD resolution – one will need some of the best PC hardware the market has to offer. When tested by Techspot, the highest performing 1080p GPU was found to be AMD’s $999 Radeon RX 6900 XT, which averaged 207 FPS for 18 different titles. Even Nvidia’s popular high mid-end option, the GeForce RTX 3080, was only able to average 186 FPS in these benchmarks. Of course, these metrics represent an average, so there will be games that reach well above the 240 FPS mark; though these will be less-demanding competitive online multiplayer titles, rather than single player triple-A games.

One of the specifications where the IPS panel outshines most of its competition – including that of its TN counterpart – are its viewing angles. TN panels are mostly meant to be viewed from the front, and the Dell AW2518HF is no exception. It has poor vertical – and even horizontal – viewing angles, which is typical for its panel type. On the other hand, the Dell AW2521HF, with its IPS panel, only begins to display a color washout at a 45 degree horizontal angle (either left or right), while colors  begin to shift at the 57 to 58 degree mark. Similarly, black level raises are noticed at a high, 70 degree angle from either direction. Its vertical viewing angle is not as impressive, as color washout begins within a 31 degree angle (from above or below), and color shift begins from 39 to 42 degrees (black level raise is identical for both vertical and horizontal angles). Gamma shift from above and below begins at 32 degrees, while from the left and right directions it is noticeable at 58 and 57 degrees respectively.

Neither of these Alienware models have screen curvature, but the AW2518HF is not ideal for sharing, which is an issue that the AW2521HF ignores completely.

We can’t expect much from either IPS or TN panels when it comes to contrast ratios, and neither of these competing options is an exception to the norm. The Dell AW2518HF was measured to have a static contrast ratio of 948,5 to one by Tom’s Hardware, while Rtings.com measured the AW2521HF to have a native contrast of 1,198 to one. Of course, a 20% contrast ratio may seem like a substantial upgrade, but in reality these metrics vary between units, and are within the same 1,000 to one range of their advertised specifications. A mediocre static contrast ratio means black colors may look more like gray, especially in darker environments; which is something to be expected when purchasing either of these monitors.

Another inherent advantage of IPS monitors is their superior color saturation and larger color gamut, which becomes apparent when they are compared to TN panels. This commonality proves to be true in this comparison as well, as we see the Dell AW2521HF outperform the AW2518HF in the Adobe RGB 1998 color gamut by a significant margin. That being said, the latter model does hold its own in regard to the sRGB color space, with Tom’s Hardware claiming it was able to reproduce 99.78% of the sRGB color spectrum, but only 68.42% of the Adobe RGB color space. On the other hand, when measuring the Dell AW2521HF, Rtings.com found it to be able to reproduce 97.7% of the sRGB xy color space (on CIE 1931 xy), and 75.21% of the Adobe RGB xy color spectrum (80.4% in lCtCp). Though its advantage is not of the magnitude one would expect for the typical panel properties, it still does give itself the edge over the Dell AW2518HF.

Firstly, for full black to white transition times, it took the AW2518HF just 6 ms to respond, and not far behind was the AW2521HF which took 6.4 ms at its default overdrive setting (Fast). These measurements are taken using the monitors’ native refresh rate, since at 60 Hz the response times (and input lag) do increase. To be more specific for the AW2521HF, the total response times increases to 10.4 ms – which is still an excellent result.

When responding to an input, the AW2518HF was measured (by Tom’s Hardware) to have an absolute (end-to-end) input lag of just 19 ms, which is incredibly low. Similarly low were the tests carried out for the AW2521HF (by Rtings.com) that was found to have 2.7 ms of input lag (not absolute) at its native resolution and refresh rate, increasing to 3.1 ms with VRR enabled, 9.7 ms at 60 Hz, and 12.7 ms at 60 Hz with VRR enabled.

Whether it be for competitive gaming on an enthusiast, or professional level, these monitors are both suitable for even the highest competitive standards.

Another nearly identical aspect of these two monitors is their ergonomic versatility. They both have a removable stand and can be mounted via a standard VESA mounting interface of 100 x 100 mm, though, if the monitors are left on their stand, they can have their height adjusted by up to 130 mm, they can pivot (clockwise and counterclockwise) by 90 degrees, they can swivel (left and right) by 20 degrees, and they can tilt forwards by 5 degrees and backwards by 25 degrees (AW2518HF) or 21 degrees (AW2521HF).

Other than display connectivity, modern gaming monitors are also equipped with USB ports, used for plugging peripherals directly to the screen, thus saving ports from the PC and relieving some of the resulting cable clutter. In this regard, both monitors fare equally well, as both include a total of five USB 3.0 ports: four downstream and one upstream. Display and audio connectivity are also the same for these two variants, as they carry two HDMI 2.0, and one DisplayPort 1.2 sockets, as well as one 3.5 mm audio in and one 3.5 mm audio out jacks.

In terms of features, we have VRR, in the form of native AMD FreeSync support and Nvidia G-Sync certified compatibility, an on-screen timer, and fps counter, and display alignment (which helps when setting up a multi-monitor setup) for both options.

After a thorough analysis of the two Alienware monitors in all aspects relating to a monitor’s performance, we see that they are surprisingly similar – despite the relative upgrade from a TN to an IPS panel. These upgrades for the Dell AW2521HF include having better viewing angles, and a slightly larger (and more accurate) color volume. Other than that, they perform on an almost equal level. In other words, the IPS panel seems to attain all the same positive qualities of its TN counterpart – like quick response times and low input lag – while adding the aforementioned advantages.

Of course, one can argue that  these advantages are very minor for what should be an upgraded model, but given that the Dell AW2521HF launched with a 20% lower suggested retail price than the Dell AW2518HF, these upgrades are rather nice.

But, is there any reason to purchase the Dell AW2518HF at its current price, given that it costs $230 (67%) more than the DellAW2521HF? Surely not for any practical reasons, but a collector might want to attain what is possibly one of the best TN monitors to have ever been released, now that TN panels are slowly becoming obsolete.