Corsair Force MP600 vs Samsung 970 EVO Plus: Which is Best Value? 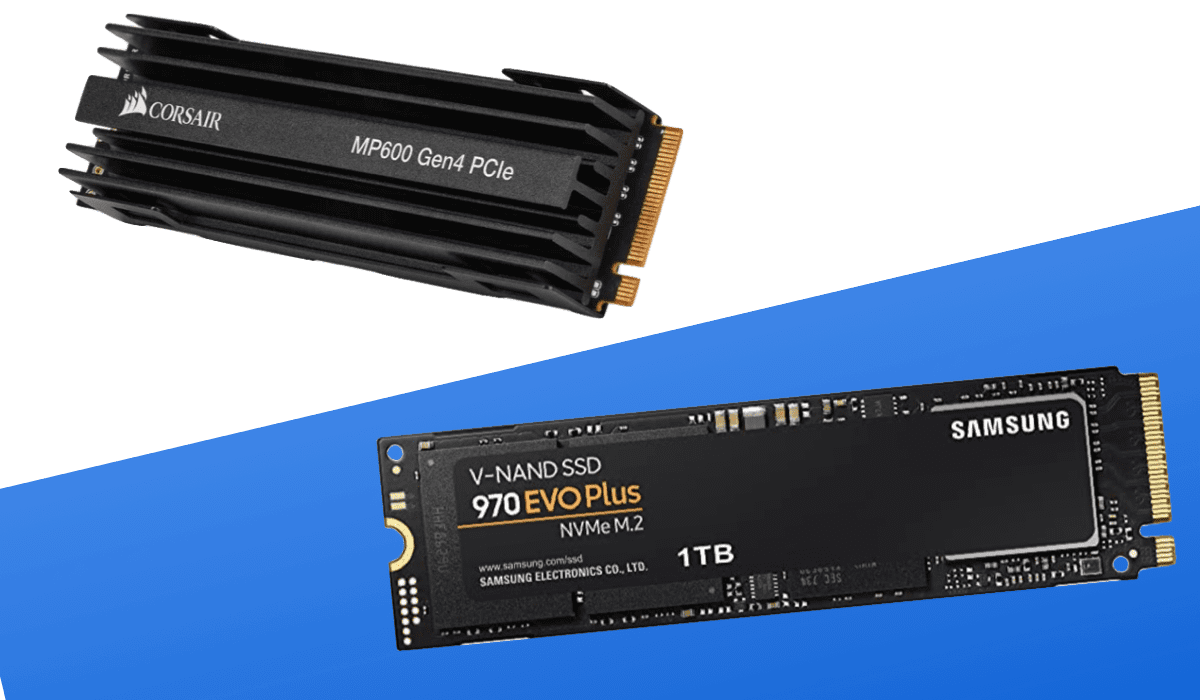 With Intel’s upcoming transition to PCIe 4.0 compatibility – seen in their new 11th generation Comet Lake-S CPUs – investing in an SSD that makes use of the fourth generation of PCI Express lanes sounds like an excellent idea. However, given that previous generation storage drives are now seeing a considerable price decrease, PCIe 3.0 NVMe drives can be equally enticing.

An SSD that has seen a 34% price decrease as of late, and makes almost full use of the capabilities of the previous generation PCIe 3.0 technology it was designed for, is the Samsung 970 EVO Plus. On the other hand, one of the earliest PCIe 4.0 compatible SSDs – the Corsair Force MP600 – has also been on sale, with a current price very similar to the Samsung 970 EVO Plus. So, how do these two options compare to each other, and which is the wiser choice in regards to value for cost?

To find out, we will compare the two models in terms of manufacturer-provided specifications, as well as real-world benchmarks, and come to a conclusion for which M.2 drive is the superior option for your build.

At first glance, we can see that the Corsair Force MP600 has a 41% sequential read speed increase versus the Samsung 970 EVO Plus, which is not quite as impressive as the 100% increase promised in the generation leap, but it is still a significant difference, nonetheless. The sequential write speeds of the Corsair MP600 also see a 29% increase, while 4K random and write speeds show an advantage of between 10% to 13% and 7% to 9% respectively versus the 970 EVO Plus.

Though both SSDs have the same 5-year warranty, the Samsung 970 EVO Plus has TBW (Terabytes Written) values that are about one-third of that of the Force MP600. This, of course, will affect very few users, as going through 300 TBW would still require 90 GB written per day, every day, for 10 years. But for professionals that transfer large amounts of data per day, the 1,800 TBW of the 1 TB, and 3,600 TBW of the 2 TB models of the Corsair Force MP600 are excellent metrics that can rarely be found in other equivalent SSDs; even with the newer drives that make use of fourth generation PCIe lanes.

Oddly enough, the current price of the Corsair Force MP600 is not far from that of the Samsung 970 EVO Plus, especially when it comes to the 1 TB and 2 TB variants. The 500 GB model does cost 25% than its Samsung counterpart, but the other two storage sizes cost only 6% more: 10 dollars, and 20 dollars respectively. Given that the Force MP600 also includes a heatsink with its purchase, it seems well worth its value; but only benchmarks will tell whether or not it warrants its price, even if the difference is minor.

Benchmarks do, in fact, show a lead for the Corsair Force MP600 that is analogous to its advertised specifications. It has a 41% faster peak sequential read, a 28% faster peak sequential write speed, a much faster 4K random read speed (by 30%), and a 4K random write speed that is 4% faster than the 970 EVO Plus. These differentials do decrease significantly when the metrics are measured with real world applications, but, even still, the Corsair MP600 is the faster SSD in all aforementioned categories. Also, despite its better overall performance, it consumes 14% less energy on average – making it far more power efficient than the 970 EVO Plus.

For benchmark programs like the PC Mark 8 – which simulates popular, commonly used, applications – we see the Corsair Force MP600 barely pulling ahead by just 9 points (a lead of less than 1%); though in the more hardware intensive SPECworkstation 3 test, the Samsung 970 EVO Plus trails by 11%.

The only aspect in which the Force MP600 falls behind its Samsung counterpart is its gaming load-times – which is not surprising, given that superior SSDs will often trail previous-generation models in this metric – a result tracing back to SATA III SSDs outperforming their NVMe counterparts. In this case, it took the Force MP600 about half a second longer to load the FF XIV benchmark; making the 970 EVO Plus about 4% faster.

So, is the Corsair Force MP600 better than the PCIe Gen 3 Samsung 970 EVO Plus, enough so to warrant its slightly higher price tag? It definitely appears so, at least when it comes to the 1 TB and 2 TB versions. Its 500 GB variant, which costs 25% more, does not display the same amount of value, and the Samsung 970 EVO Plus is surely not that inferior to the Force MP600 to warrant such a price difference. Even for gamers, and those that will not fully benefit from the potential performance of the Corsair Force MP600, it is the superior choice between the two.

That being said, there are plenty of cheaper PCIe 3.0 SSDs in the market that perform equally well, or better, than the Samsung 970 EVO Plus, so there are always more options to explore, depending on their intended use.