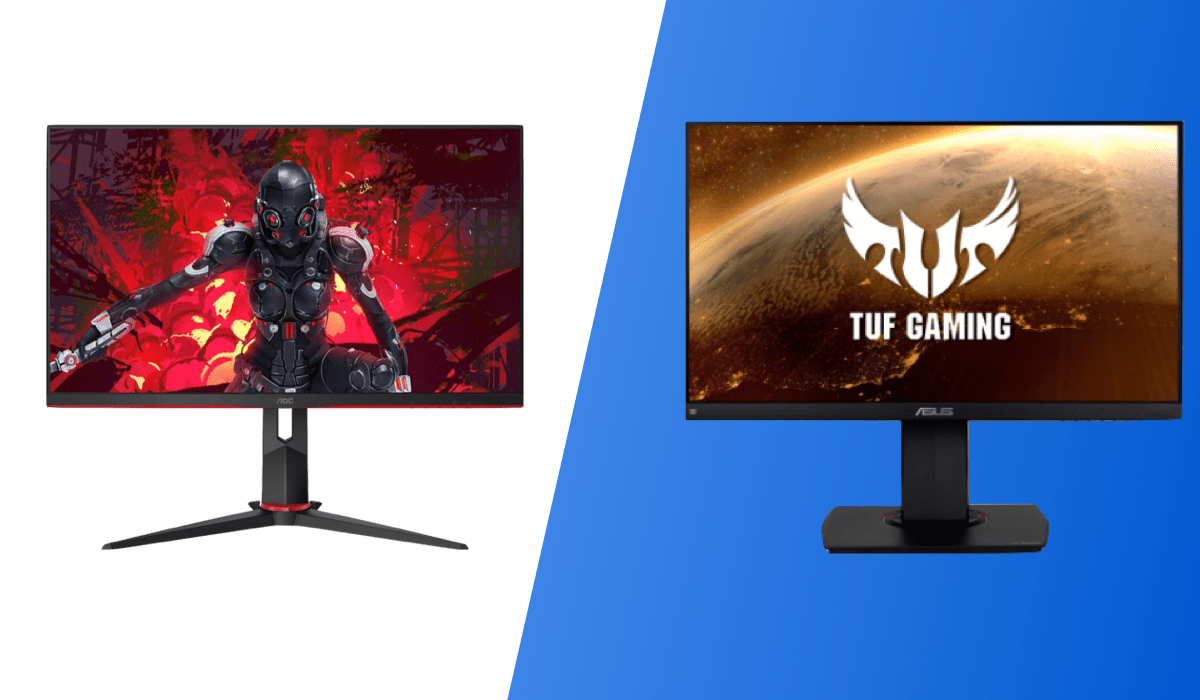 It’s becoming easier to affordable monitors with premium features that used to be reserved for only the top-tier options. With the rise and subsequent dominance of 1440p as a popular resolution choice for enthusiasts, the cost of premium 1080p full HD displays has fallen quite a bit. 1080p displays still have their place in the market. They are affordable, packed with features, and many gamers who are building systems on a budget will appreciate the options that these affordable displays bring to the table.

The two this guide will be taking a look at are both stellar options in the price bracket of right around $250. The AOC 24G2U and the Asus VG249Q are aimed at competitive gamers who want lightning-fast response times with low latency. This guide will go over the key differences between the two displays and conclude with which of the two is the best option for gaming.

Both monitors feature similar black plastic designs with red accents, though the AOC 24G2U has a bit more flair with its wide silver base and eye-catching red stripe hugging the bottom bezel of the display. The two displays go for frameless-style panels that are nearly identical in dimensions with the Asus VG239Q having an ever so slightly wider bottom bezel. We’re talking about millimeters here. Both displays have 24inch panels with anti-glare coatings that make them suitable for even sunnier rooms.

The two displays feature ergonomic stands that can rotate, pivot, and swivel horizontally as well as vertically. Both sit right around the 30-degree mark for horizontal and vertical pivoting with support for full portrait mode rotation as well as a vertical slider. The Asus VG249Q has a simpler design while the AOC 24G2U is meant to stand out just a bit more. It will come down to personal design preference as to which one would look best with your setup.

Each display has 1920 x 1080 IPS panels with a 1ms response time and a 144Hz refresh rate. Additionally, the stiff competition between these two displays continues with each having identical top brightness levels sitting right at 250 nits. Even the contrast ratios are the same at 1000:1 for both displays.

The AOC 24G2U and VG249Q boast similar flicker-free, low blue light, and AMD FreeSync features that help improve gaming experience and consistency while limiting eye strain. Neither display supports HDR. With so many similarities, we’ll have to dig a bit deeper to see what sets these monitors apart.

The AOC24G2U and Asus VG239Q continue to be neck and neck with both displays supporting 100% of the sRGB color space with no reported excess saturation or blurriness. Even the reported color support is identical between the two at 16.7 million. Both displays have very minor differences in tone with the AOC reporting a minor green tint out of the box and the Asus model being a bit warm in tone. Both models can be calibrated semi-accurately using menu settings and online calibration tools. Neither is going to have the same breadth of support and accuracy as professional-focused displays, but these two offer high enough visual fidelity for crisp and clear gaming and movie watching.

This competitive pair of displays can be VESA mounted on standard 100x100mm mounts with no problem. Now, where we finally start to see some differences is the I/O. The AOC 24G2U has an impressive array of connectivity options. There are 4 USB 3.0 ports with one that supports fast charging. Buyers can also enjoy 2 HDMI 1.4 ports, a single DisplayPort 1.2a, a VGA port, a 3.5mm audio jack, and a connector for the power cord which features an internal PSU.

Meanwhile, the Asus VG2349Q falls behind here. It does not have any USB ports. It does have a single HDMI 1.4, one DisplayPort 1.2, VGA, and a 3.5mm audio jack. The I/O is not bad by any means, but the AOC model goes above and beyond and gives users many more options to play around with.

The Asus VG249Q slides in at an affordable MSRP of right around $240. At the time of writing this comparison, the AOC 24G2U is selling for $250. However, this feature-rich monitor has very frequent sales that can see it going as low as just $179. At that price, this monitor is a must-have for users looking to get the most bang for the buck. While both monitors are great deals for the price, the AOC 24G2U is the better value deal of the two.

These monitors are so close in features that either is going to serve as a great gaming display. Both sport similar color accuracy, identical refresh rates, and have the same premium features that gamers look for like AMD FreeSync. The factor that rocketed the AOC 24G2U ahead is the rock-bottom price compared to other monitors in this bracket. It’s simply a great value considering the fast refresh rate and robust set of features.