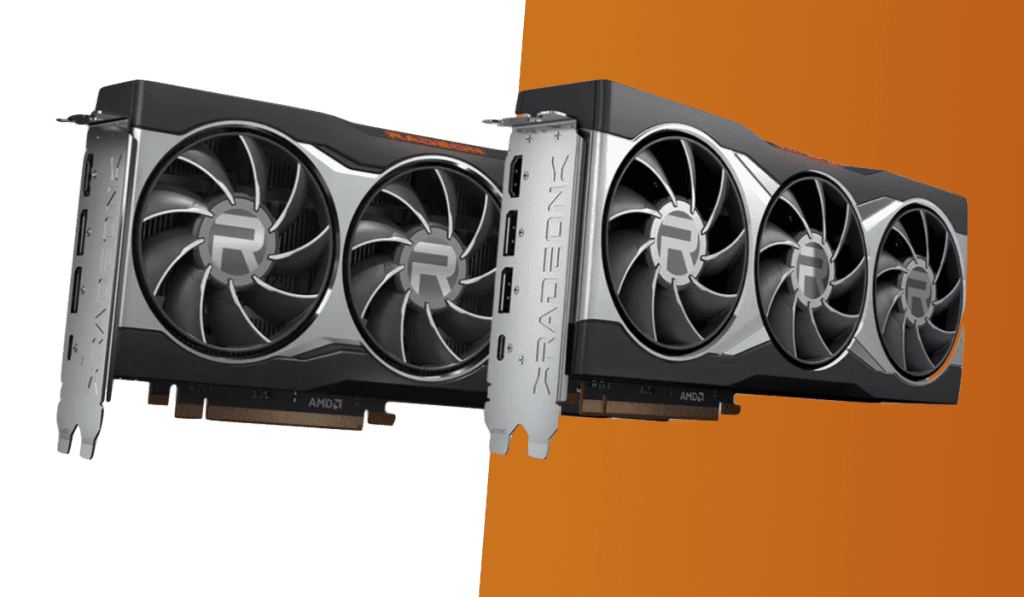 After conquering the consumer-grade CPU market, AMD has aimed their sights on dethroning Nvidia, as the GPU manufacturing king, and asserting a newfound gaming-GPU market dominance. In the past, AMD has several times attempted to challenge Nvidia, but to no avail, proven by overall sales. This time around, AMD is hopeful that the new RDNA2 architecture of the Radeon RX 6000 Series GPUs, will deliver a significant blow to Nvidia’s RTX Ampere 3000 Series lineup, especially after the failure to properly launch their two high-end GPUs. Hopefully, AMD will not follow suit and botch their own launch, because, if they have not misled us with their benchmarks, these new GPUs do look incredible.

During their Radeon RX 6000 Series announcement presentation, AMD displayed three new Navi 21 GPUs, as well as how they fair against their Nvidia RTX counterparts. To remove some of the doubts that their info-graphics were deceptive, as some of the benchmarks they displayed did include overclocking for their GPU but not for their competition (6900 XT vs 3090), AMD has now created a webpage which allows one to compare benchmarks for several gaming titles between all their newly announced GPUs, as well as with Nvidia’s GeForce RTX 3080, GeForce RTX 3090, and GeForce RTX 2080 Ti. This page also allows us to see the full build that was used to carry out their benchmarks, as well as new graphs that feature FPS per price metrics for each of the aforementioned options. The only concerns for AMD’s newly announced GPUs have to do with their thermals, as past RDNA GPUs (like the Radeon RX 5700 XT) would operate with temperatures upwards of 100 degrees Celsius, as well as the drivers.

The additional features that AMD has included for these new series of graphics cards are not quite on the level of Nvidia’s DLSS or Reflex, but they still do offer a substantial performance enhancement to their GPUs. Firstly, to rival Reflex, AMD has improved their input latency reducing technology, now offering second generation AMD Radeon Anti-Lag, which, together with Radeon Boost, can reduce end-to-end input lag by a considerable amount. Still, what AMD is lacking is the native Reflex Latency Analyzer and 360 Hz monitors, that manufacturers have partnered with Nvidia to create, in order to enhance Reflex in order lowers end to end input lag (by up to two-thirds) and also display this overall latency to the user in real time.

What AMD’s does have, that Nvidia cannot match, is Smart Access Memory: A feature that allows new Radeon RX GPUs to share memory with Zen 3 Ryzen 5000 Series CPUs, which allows for an overall boost in gaming – and perhaps other – application performance.

Another new element found in these RDNA 2 AMD GPUs is AMD’s Infinity Cache, which is based off the Ryzen 5000 Series Level 3 Cache, allowing a 256-bit memory bus to deliver more than twice the bandwidth of a typical 384-bit memory bus, while expending less energy. This allows the two most powerful GPUs announced by AMD: The Radeon RX 6800 XT and the Radeon RX 6900 XT, to offer similar, and sometimes even greater, gaming performance than their Nvidia counterparts, despite having less power demands and, in the case of the RX 6900 XT, a smaller form factor as well. Because the Nvidia GeForce RTX Ampere 3070 had not yet been released when AMD held their RDNA 2 launch presentation, we do not know how well the Radeon RX 6800 fares against this GPU, but, instead, we were given benchmarks comparing the RX 6800 to Nvidia’s, previous generation, GeForce RTX 2080 Ti.

Given that we are now reaching the end of the life span of both the AM4 chipset, as well as the DDR4 RAM memory type, makes it the best time to build a rig that will last well into the future, as current-generation technology has reached its peak – not only in terms of performance but also in cost efficiency. For the ultimate high-end, value-performance ratio focused build, we ask: Which GPU is the best to pair with one of AMD’s new Zen 3 processors (which are now the most powerful CPUs for gaming) when it comes to building a high-end gaming setup? Additionally, which combination will provide the highest FPS per dollar ratio?

In terms of which CPU is best, from what we know so far, it does appear that the Ryzen 7 5800X will be the performance-value king of the Zen 3 lineup, as it fully utilizes AMD’s new Zen 3 architecture; maxing out the number of cores and L3 Cache that a CCX can hold, without having the need to communicate with a second CCX like the Ryzen 9 CPUs do.

To determine which GPU will constitute the best choice for a new high-end gaming rig, let’s compare the two more expensive options AMD has announced; both in terms of specifications and benchmarks, as well as how well they fare against their Nvidia competition.

Though the GPUs are very similar – with an identical foundry, die size, VRAM, clock speeds, TDP and form factors – the Radeon RX 6900 XT still costs $350 more than the Radeon RX 6800 XT. The difference between the two GPUs lies solely in their rendering power. The Radeon RX 6900 XT has 512 more Stream Processors, 32 more TMUs, 8 more RT cores, and 8 more Computing Units. This translates to a discrepancy of computing power of 4.61 TFLOPs of FP16, 2.3 TFLOPs FP32, and 0.144 TFLOPs of FP64 theoretical performance. Still, for a price differential of $350, these differences do seem quite minor. But, before we come to that conclusion, let’s check what kind of performance differences these two GPUs exhibit in their benchmarks.

When Nvidia launched their GeForce Ampere RTX 3090, on September the 24th, consumers were well aware that this GPU was definitely not a cost-efficient graphics card. It was, in fact, apparent that the RTX 3090 is a workstation-optimized GPU, similar to the previous generation Nvidia RTX Titan. Still, within minutes of its release, the RTX 3090 sold out. Though we can blame Nvidia for their limited stock of the product, it still does not take away from the fact that the demand for this GPU is extremely high.

Gamers have shown that they are willing to spend disproportionate (to value) amounts of money for the bragging rights of having “the most powerful” gaming build – which may be the reason why the Radeon RX 6900 XT is priced so high. If AMDs benchmarks are to be trusted, the RX 6900 XT performs on an equal level to the RTX 3090 in gaming benchmarks; leading in some titles and trailing in others. If you would like to build a PC that provides peak gaming performance, then the Radeon RX 6900 is the best choice for you, as it leads the RTX 3090 in most titles (that AMD tested) and costs $500 less. If you have any specific gaming titles that you would like to achieve a performance peak for, it would be best to wait for user-tested benchmarks of that specific game.

For professional e-Sport players, the best performing GPU will be an RTX Ampere 3000 Series graphics card, due solely to Nvidia Reflex, and Nvidia’s partnership with monitor manufacturers for the release of 1080p, 360 Hz, monitors. Because these monitors include the integrated Reflex Latency Analyzer hardware, and are optimized to reduce end-to-end input lag so drastically, it is difficult to recommend anything AMD has to offer – even with their Anti-Lag and Radeon boost features.

These two exceptions aside, for every other PC builder (and vast majority of users) looking to make a high-end gaming setup, the AMD Radeon RX 6800 XT is the superior GPU – no matter what the resolution you’ll be gaming in. It has high performance in 4K, 1440p, and, most likely, 1080p, at an excellent price. Not only is this GPU cheaper than the Nvidia RTX 3080, but it also outperforms it in almost every title AMD tested. Even without the use of Smart Access Memory, the Radeon RX 6800 XT is still the superior GPU to the RTX 3080, due to its cheaper price and superior energy efficiency. Also, since it is looking like game developers will be optimizing their games for an AMD interface (since both next generation consoles have RDNA 2 GPUs), this advantage may grow as new games release.

The differences between the Radeon RX 6800 XT and the RTX 3080 in FPS performance are minimal, and may ultimately be negligible, but the fact that AMD has managed to develop GPUs that rival Nvidia is an impressive feat; one that Nvidia will have to face despite their latest botched releases. Still, the fact that Nvidia now has a more serious rivalry with AMD is a great benefit to the consumer, since both companies are now forced to compete in developing the most powerful hardware possible, and sell them at more competitive prices. Currently, for this generation of GPUs, it appears that the Radeon RX 6800 XT will reign supreme, and is a force to be reckoned with for Nvidia and their future RTX 3000 Series GPU launches.