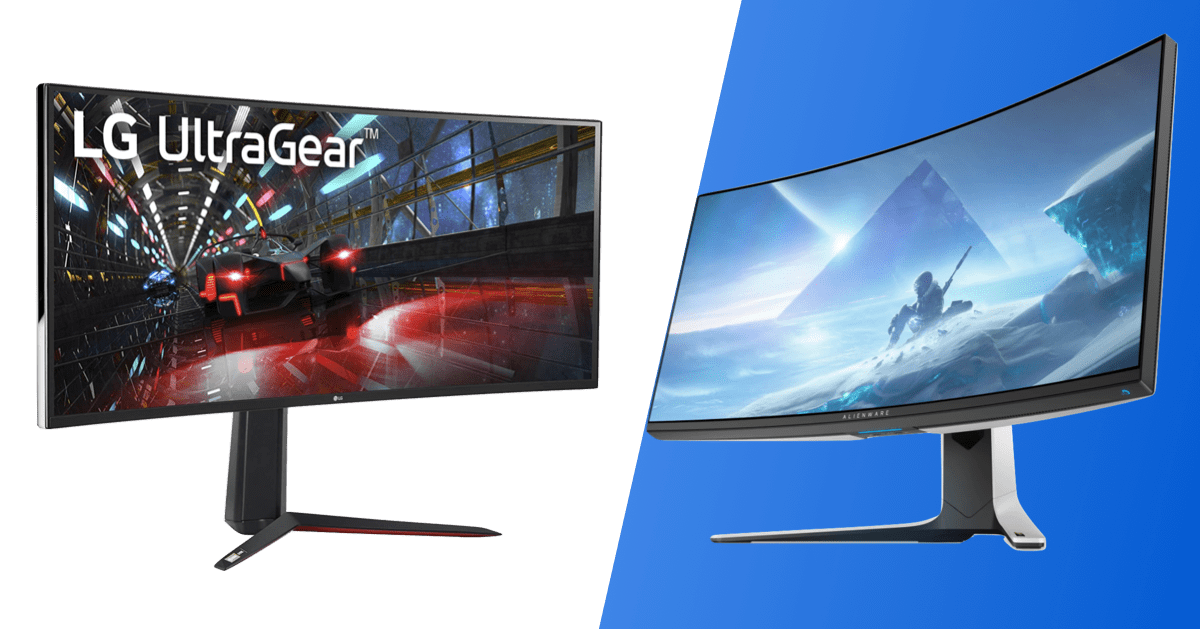 Large screen ultrawide monitors are gaining more and more popularity, and for good reason. They constitute a great alternative to multi-monitor setups, and can provide an immersive experience for gaming, while they allowing for high levels of multi-tasking for work, study, or content creation.

IPS monitors, on the other hand, have exceptional viewing angles, and, as their technologies have progressed, now have fast response times, low input lag, and can reproduce a wide gamut of colors. The aspect in which VA panels are superior to their IPS counterparts, relates to the contrast ratios of the screen.

If that is a trade you are willing to make, then there do exist two excellent ultrawide, 35-inch, gaming monitors with IPS panels: LG’s 38GN950, and Dell’s Alienware AW3821DW. Given that the 38GN950 is $400 more expensive than the AW3821DW, let’s compare the two and find out if the differences between the two warrant the price discrepancy.

Preferences for external appearance will always be subjective, but, in this case, it is clear which manufacturer placed more emphasis on creating a better-looking unit.

The LG 38GN950 has a black matte bezel, with borders that are thin, but do not quite give a “borderless” look. The back-side of the monitor is rather plain, though it does have an RGB illuminated ring around the exhausts that can be customized. The stand supporting the LG 38GN950 is bulky, and there is a cutout that can be used for cable management.

On the other hand, the Alienware AW3821DW has a three-side virtually borderless design, with a stylish bipod stand and a black, anti-glare, finish. The backside of the monitor and the stand have a light grey cover, as well as two RGB illuminated displays: an Alienware logo on the top right corner, and a strip running across the back side of the stand. Overall, the Dell Alienware AW3821DW has a modern, yet simplistic presence that gives it a noticeable edge against its LG 38GN950 counterpart.

The resolutions may be identical, but the refresh rates do differ slightly. Now, it may appear that the LG 38GN950 has the advantage in this regard, due to its ability to overclock to 160 Hz, but there is a downside to the 38GN950’s framerate.

Because the LG 38GN950 does not have a true 10-bit panel depth – as it uses Frame Rate Control (FRC) to simulate the higher bit-depth – the monitor cannot handle both a 144 Hz refresh rate and FRC. In turn, the 38GN950’s refresh rate must be reduced to 120 Hz in order to maintain the panel depth, and display the 1.07 billion colors it is capable of. On the other hand, the Dell AW3821DW has a true 10-bit panel depth, so it can operate at 144 Hz without limiting its color gamut.

Another factor to take into account is the fact that processing games at a 1060p resolution is very hardware intensive, and doing so at above 144 Hz will not be possible for several game-titles, even with some of the best GPUs available in the market.

So, because there is a tradeoff between having the ability to overclock for an additional 16 Hz, but having to lose 24 Hz to maintain the larger color reproduction range, we’ll have to call it a tie for this category.

The displays for both options are identical, since both make use of Nano IPS panels (the nano aspect refers to nano particles being applied to the backlight, for better color reproduction), a W-LED backlight, and a slight (2300R) curvature.

Having an IPS panel means great viewing angles, low input lag and response times, as well as a wide color gamut, at the cost of the static contrast ratio.

We do have a tie in this category as well, since both monitors are able to output the same level of brightness (450 – 600 nits) – which also allows them both to have a DisplayHDR 600 certification – as well as a low contrast ratio of only 1,000 to one; which is typical for an IPS monitor.

As mentioned earlier, the Dell AW3821DW uses a true 10-bit panel depth, and therefore can display the full array of 1.07 billion colors it is capable of no matter what the refresh rate.

The LG 38GN950 is able to display 100% of the sRGB color spectrum, and 98% of the DCI P3 color space, with the use of FRC. This function works by quickly switches between various color tones, creating the illusion that the backlight is reproducing more intermediate color tones than it is actually capable of.

Thanks to the fast IPS panels, both monitors display excellent response times, with G2G transitions reaching as low as 1 ms at their maximum speed settings (Extreme for the Dell AW3821DW and Faster for the LG 38GN950). Using lower settings can bring the response time to a maximum of just 4 milliseconds.

Input lag is also excellent, ranging from 4 to 6 milliseconds, and is identical for both displays. The LG 38GN950 can lower the input lag to 4 milliseconds via overclocking to 160 Hz, but this will hardly be of use as the input lag is already at a satisfactory level. Given the fact that GPU manufacturers now include lag-reducing features, like Nvidia’s Reflex or AMD’s Anti Lag, end-to-end latency can be reduced to an absolute minimum. These monitors are both suitable even for high-level competition.

The LG 38GN950 has a removable stand and can be mounted via a VESA compatible interface of 100 x 100 mm. The stand itself allows for the height of the monitor to be adjusted by 110 mm, and have the screen tilt forwards by 5 degrees and backwards by 15 degrees. No landscape or portrait pivot, and no left or right swiveling are possible for this monitor.

The Dell Alienware AW3821DW, on the other hand, can have its heigh adjusted by 130 mm, it can tilt forward by 5 degrees, backwards by 21 degrees, and also includes the ability to swivel in both directions (left and right) by 20 degrees. It is also VESA compatible with a 100 x 100 mm interface.

Though IPS panels can typically be less energy efficient, this is definitely not the case for these two monitors – though once again the Dell AW3821DW does have an advantage.

Both monitors make use of HDMI 2.0 and DisplayPort 1.4, for their display connectivity, but when it comes to connecting with other peripherals, the Dell Alienware AW3821DW is once again the superior model.

The 38GN950 and the AW3821DW both have High-bandwidth Digital Content Protection (HDCP), which prevents unauthorized copying of digital audio and video content.

Usually monitor features are nice-to-haves, but nothing too important that could make or break a purchase. This is not the case here.

Both the LG 38GN950 and the Dell AW3821DW have all the standard features associated with a gaming monitors, like a low blue light filter, a crosshair overlay, flicker-free technology, and RGB customization software.

The LG 38GN950 also has Sphere Lighting 2.0 (synchronizing the monitor’s backlight with in-game content), a black stabilizer, and dynamic action sync for both AMD and Nvidia, in the form of FreeSync Premium Pro, and G-Sync.

The Dell AW3821DW has an ambient light sensor, and is Nvidia G-Sync Ultimate certified. It does not, however, have native support for AMD FreeSync. In most cases, FreeSync will still work with the monitor, but it is not guaranteed by the manufacturer.

What the Alienware AW3821DW has that is a game-changer in terms of included features, is Picture-in-Picture (PIP) and Picture-by-Picture (PBP). These features allow for two devices to be displayed simultaneously on the same screen: PIP has one device displayed on the main screen in inset windows, while PBP separates the screen in half, with each source device occupying one half of the screen. This allows you to connect, for example, both a desktop and a laptop to the same monitor, which can prove to be extremely useful. These features are entirely absent from the LG 38GN950.

For most monitor comparisons, this is where we would separate the verdict into different sections, proclaiming each to be the best option for various modes of application – like competitive gaming, console gaming, and general use. However, in this case, there is no area in which we would find the LG 38GN950 to be superior to the Dell Alienware AW3821DW.

If the monitors were equally priced, or if the LG 38GN950 was slightly cheaper, there could be an argument to be made for competitive gaming, as having the ability to overclock the refresh rate to 160 Hz can be useful, even if that meant sacrificing the color gamut, ergonomics, connectivity, and even the PIP and PBP features. But given that the Dell Alienware AW3821DW is actually cheaper by $400 by default, this argument is ultimately devoid of any substance.

The Dell AW3821DW is the superior monitor in almost all aspects in which the monitors differ, and can currently be found new, for a cheaper price than what the LG 38GN950 is selling as a used, or renewed, unit.

To be more specific, the LG 38GN950 is valued at $1,599 on Amazon, whereas the Dell Alienware AW3821DW is currently being sold on Dell’s website for just $1,529. Given the discrepancy in price, and all other aforementioned factors, there is simply no function that we can imagine the LG 38GN950 outperforming the Dell Alienware AW3821DW; and the fact that it is currently more expensive than its Dell counterpart is simply icing on the cake.