Acer Predator X35 vs Asus PG35VQ: Battle of the 35″ Ultrawides 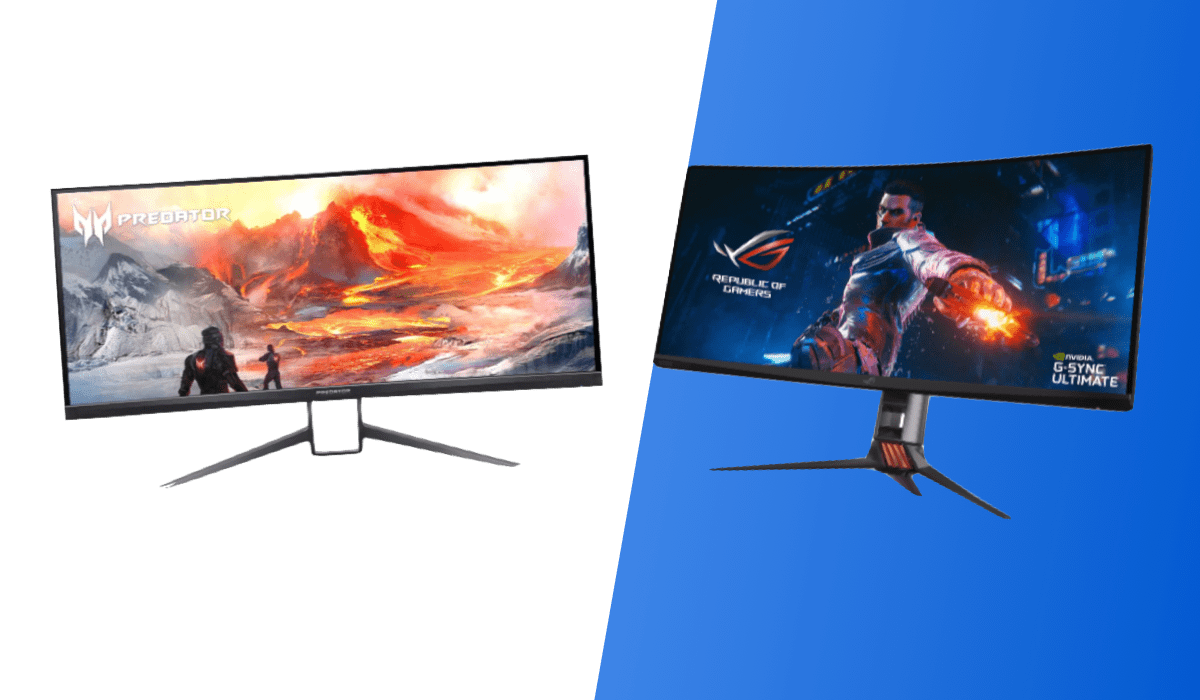 Despite Samsung having the upper-hand in the large-screen gaming monitor market – due mostly to their proprietary SVA panel types – the company does lack options when it comes to 35-inch curved gaming monitors. It is in this specific category that two of Samsung’s chief competitors battle for supremacy: ACER and ASUS.

Both these Taiwanese manufacturers have released options that are hailed as some of the best gaming monitors available: ACER with their Predator X35, and ASUS with their ROG Swift PG35VQ.  However, because of how similar these two monitors are in their specifications, it may be difficult to choose which of the two monitors to purchase; and though this choice may ultimately be decided based on price or availability, there are also certain key aspects that differentiate the two monitors enough to allow for a more educated decision.

Without further ado, let’s take a look at what makes these monitors truly unique and, through their comparison, come to a verdict as to which monitor is best for different intended uses

Since beauty is in the eye of the beholder, the winner of this category will ultimately be subjective. However, what we’re looking for here is where or not the manufacturer has placed effort in making a stylish design that is worthy of the monitor’s elevated price-tag. Thankfully, neither of these two options disappoint.

The ASUS ROG Swift PG35VQ has a more extravagant exterior, with a large RGB-illuminated ASUS ROG logo behind the monitor, as well as an RGB compatible lighting system that projects a ROG logo onto the surface below the monitor.

On the other hand, the ACER Predator X35 has opted for a sleek and modern design; with a less clunky, and more simplistic stand, its ambient lighting includes only four illuminated RGB-lit angled accents.

Both monitors have very thin borders, making them ideal for multi-monitor setups.

If you prefer minimalistic designs, then chances are you will favor the ACER Predator X35 over the ASUS PG35VQ.  If, instead, you are a gaming enthusiast that gets a kick out of over-the-top RGB displays, then the ROG Swift will be more to your liking.

Despite the odd and uncommon default refresh-rate, both monitors have opted for 180 Hz displays, on a 3440 x 1440 resolution. They also allow the user to overclock the refresh rate to 200 Hz, which will, in-turn, provide slightly better input lag and response times.

Of course, to make use of such high refresh rates, like 180 or 200 Hz at a 1440p resolution, is a very hardware intensive task, one which even the best hardware the market has to offer may not be able to achieve. In fact, even the most powerful GPU in the market for 1440p gaming – which currently appears to be the AMD Radeon RX 6900 XT – was only able to reach an average of 169 FPS at 1440p, according to Techspot’s benchmarks. Still, it can be argued that its better to have a monitor with a high refresh rate potential, due to the fact that monitors can – and most likely will – outlive any current hardware within your PC.

Do note, that the 200 Hz overclocked refresh rate is only possible via the DisplayPort (1.4), as HDMI will only allow the monitor to reach a refresh rate of around 100 Hz

Once again, we do have a tie, though this time simply due to the fact that both monitors feature identical Advanced Multi-domain Vertical Alignment (AMVA) panels; meaning that they will both will have the same panel-inherent advantages and disadvantages. The advantages include a very high contrast ratio, a deep black color depth, lower power consumption, and excellent input lag. The main disadvantage here relates to the viewing angles, which are typically poor for all VA-type panels.

With an impressive 2500:1 static contrast ratio, these monitors show incredibly clean picture quality. Also, both are VESA certified for DisplayHDR 1000, and can therefore reach brightness levels that exceed 1000 nits. The only reason we give the slight edge here to the ACER Predator X35 is the fact that it has a higher default brightness level of 600 nits; versus the 500 nits of the ROG Swift PG35VQ.

The panels included with both options utilize a true 8-bit depth and, with the use of Frame Rate Control (FRC), can achieve a simulated 10-bit panel depth. FRC allows the panels to do this via rapidly switching between color tones, creating the illusion that more, intermediate, color tones are also generated. With the use of FRC, both monitors have the potential to display over 1.07 billion 30-bit colors.

In terms of response times, the 2 millisecond G2G metrics that are advertised are measured when the monitor is overclocked at 200 Hz, so the more typical minimum response time would be 4 ms, and a more realistic average would be around 8 ms – which are still great results.

Though ergonomic flexibility is usually quite limited for larger displays, this is definitely not the case for these monitors.

The ASUS ROG Swift PG35VQ’s stand allows its height to be adjusted by up to 110 mm, swivel in both, left and right, directions by 35 degrees, tilt forwards by 6 degrees, and backwards by 21 degrees. The stand is also removable and the monitor can be mounted via a stand 100 x 100 mm VESA interface.

The ACER Predator X35 has slightly superior versatility, in that its height can be adjusted by 130 mm, it can swivel in both directions by 45 degrees, and it can tilt backwards by 35 degrees, though the other specs are identical.

The ASUS PG35VQ is slightly more energy efficient than the Predator X35, consuming only 60 W of power on average, versus the 77.2 W of the latter. Both monitors feature similar power consumption while in sleep mode, of about 0.5 watts.

Once again, the advantage here is minor, though this time in favor of the Predator X35. It has the standard HDMI 2.0 socket, a DisplayPort 1.4, and a 3.5 mm audio jack, but it also includes four USB 3.0 ports: three of which are downstream, while the fourth is upstream. These ports can be used for peripherals like a mouse, keyboard, or a USB microphone like a Blue Yeti.

The ASUS PG35VQ has similar connectivity, except for that it has one less USB 3.0 downstream port.

In terms of audio, each monitor holds a distinct advantage against its counterpart. On one hand, the ACER Predator X35 includes two high quality four-watt speakers, while on the other hand, the ASUS PG35VQ makes use of an ESS 9118 DAC converter, which can deliver 192 kHZ (24 bit) of lossless playback audio.

The only issue with this DAC converter, is that builds that are powerful enough to support 1440p gaming at 180 Hz shouldhave a high-end motherboard that includes a similar – or superior – DAC converter than the one featured by the PG35VQ. That being said, if your motherboard does not have one, then this is an excellent addition that will most likely save you from having to buy a proper external amplifier.

The four-watt speakers of the ACER Predator X35 are also not too shabby, given the fact that they also include ACER’s TrueHarmony audio enhancing technology. If you prefer gaming without a headset, these speakers will suit you perfectly.

Other included features are typical to all gaming monitors of this price-range, like Nvidia G-Sync Ultimate, flicker-free technology, a blue-light filter, RGB synchronization software (AURA Sync for ASUS), a crosshair overlay, and gaming preset modes which are named Game Modes by ACER, and GameVisual by ASUS. The ACER X35 does also include a Dark Boost feature, otherwise missing from the ASUS ROG Swift PG35VQ.

The deciding factors for choosing between the ACER Predator X35 and the ASUS ROG Swift PG35VQ will most likely be price and availability. Currently, the ACER Predator X35 does hold an advantage in this regard, as it can readily be found (on Amazon and elsewhere) for its initial $2,499 MSRP price-tag or less (currently at $2,269.95). The ASUS PG35VQ, on the other hand, is selling for over 50% its original price tag, with prices ranging between $3,279 to $3,699 – depending on the seller. If this is the case during your time of purchase, then the ACER Predator X35 is hands down the better option. If both price and availability are equal, there are some characteristics that may steer you towards one, or the other, option.

For competitive gaming, the ROG Swift PG35VQ may offer a bit more utility, in that the DAC converter is excellent for enhancing in game-audio, especially for competitive games that rely on audio clues, like first person shooters. Given that most competitive gamers will – almost universally – prefer a headset over speakers. Additionally, the aesthetics of the ASUS ROG Swift PG35VQ have been created with this gaming demographic in mind, so they may be more appealing to this audience.

View the PG35VQ on Amazon

These monitors are definitely not suited for console gaming – due mainly to the unsupported aspect ratio, as well as the HDMI 2.0 display-connection causing the monitor to operate under suboptimal refresh rates – it still is possible to plug a console into these displays. It also must be stated that doing so will cause the display to stretch the console’s native 16:9 aspect ratio to 21:9, which probably won’t look great.

If you still do choose to connect a Playstation 5 or Xbox Series X one of these monitors, then the four-watt speakers of the ACER Predator X35 will likely be more useful than the DAC converter. All in all, the two options are pretty equal in this regard, though do keep in mind that VA panels generally have poor viewing angles too, so playing with others on a console with a curved VA monitor will also not be ideal.

Because of its more measured and minimalistic exterior design, better ergonomics, brightness levels, and extra USB 3.0 slot, the ACER Predator would be the better option for triple-A gaming, or other PC-usage like web-browsing, movies, content creation, work, or web browsing.

View the Predator X35 on Amazon