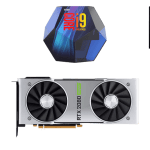 The recently released RTX 2080 Super is a welcome addition to the Nvidia RTX Turing lineup because it narrows the performance gap between the $699 RTX 2080 and the $1199 RTX 2080 Ti. The newcomer’s MSRP establishes at the same price as the RTX 2080 and improves on its performance by anywhere between 5-10%, essentially […]

With the RTX 2060 Super and RTX 2070 Super already released, the last of Nvidia’s ‘Super’ series of graphics cards to be released is the upcoming RTX 2080 Super, set to be released at the end of July. This refreshed Turing GPU card improves on its predecessor, the RTX 2080, with a marginal performance increase […]