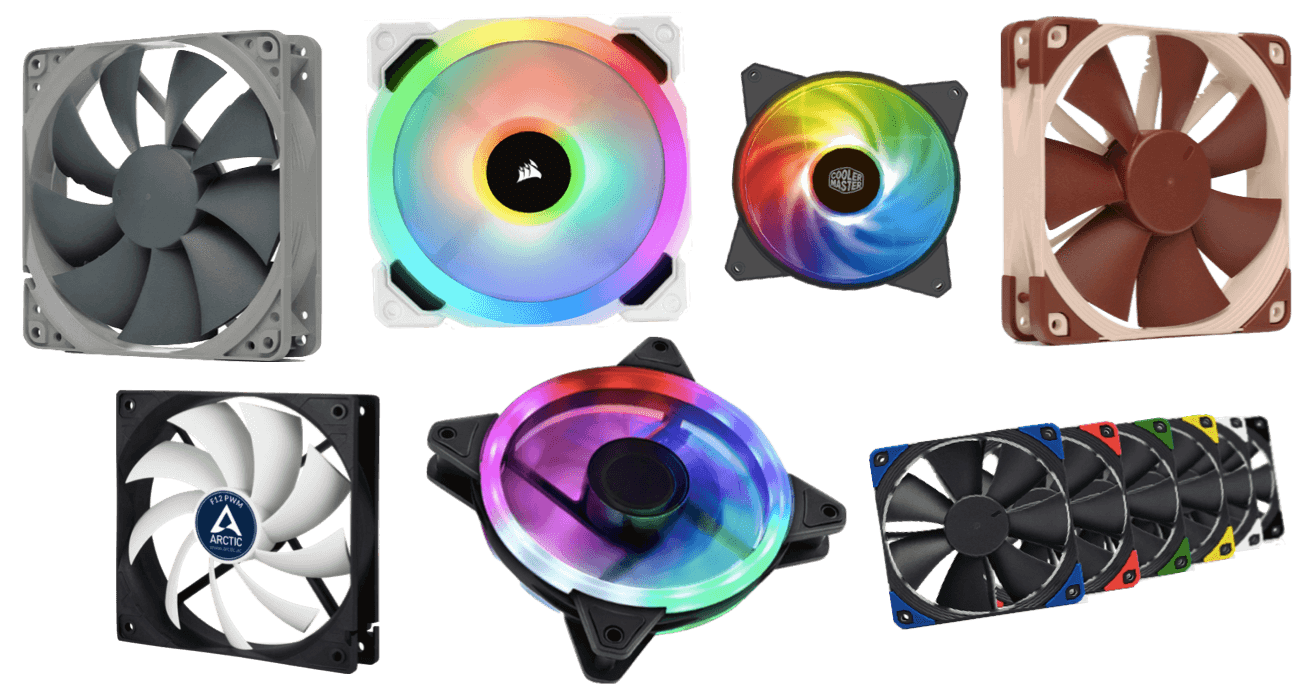 Aside from the CPU cooler and the GPU cooler, the most important part of your cooling will be your case fans. While having 10 case fans may not be necessary, most cases really benefit from having somewhere between 3-5 case fans with a combination of intake and exhaust. The exact configuration will depend on your case mainly, so make sure to look up reviews on how to set up your fans once you pick your chassis. Within the case fan area, there are really two main sizes: 120mm and 140mm case fans. 120mm will fit in almost all cases, but 140mm fans offer better airflow (usually measured in CFM) at lower RPMs, meaning quieter. We have previously given our advice for best 140mm fans, but not everyone has the space, so today we are looking at the best 120mmm case fan options on the market.

When we evaluate case fans, we are essentially talking about two things: performance & noise, and aesthetics (RGB). And we always recommend to not skimp on the cooling budget, but we know that some of these options are expensive and there are some cheaper alternatives, so each category will have our overall recommendation for those fortunate to have a large budget, and our low-budget choice that still offers great value.

With all that in mind, our recommendations for best 120mm case fans are:

If you are simply looking for the best 120mm case fan possible, and can’t be bothered with any of that RGB nonsense, there is one producer whose name immediately comes to mind: Noctua. The Austrian-based maker is legendary in the PC Building community for making the absolute best fans possible, in almost any size. They are even used in industrial solutions for data centers/servers, and are just as well respected there. They move more air with less noise, than just about any other maker on the market. The build quality is stellar, the warranty/customer service is top-notch, and the performance you get from any of their fans is as good as it gets. And because they avoid things like RGB or flashy colors (mostly), they are able to offer their fans at reasonable prices.

In terms of 120mm case fans, we have plenty of great choices from Noctua. The basic recommendation is the Noctua NF-F12 PWM. It’s their standard 120mm case fan and is reliable and performant, offering great CFM and low noise levels.

But, as you’ll notice if you click on the link or have heard about Noctua already, the color scheme of the classic Noctua fan is not for everybody. The brown and beige is an acquired taste to say the least. Luckily, there are some other options available, including the slightly less performant (but much cheaper!) Noctua NF-P12 PWM that comes in a much more subtle grey/black design. And if you have a bit more cash and want to keep the performance of the original, the Noctua NF-F12 CHROMAX version is a great option that offers some very cool color choices.

These fans aren’t cheap, but they are also much less expensive than some of the options with a ton of RGB, and offer better performance overall. The classic hovers around $20, the Redux comes in around $13, and the Chromax option is around $22. All-in-all, for the performance you are getting, the Noctua fans are a very fair price that are hard to beat.

The Noctua fans are reasonable for the performance they give, but if you find yourself short on budget and still want to get a no-frills high-performing fan, the Arctic F12 PWM is a good choice. Arctic is known for making good budget fans, and while it won’t move as much air as quietly as the Noctua fans, the F12 will still provide some nice airflow to help keep your case cool. It may not be a major difference in cost when compared to something like the GPU, as the Arctic F12 costs around $9 or ~$10 less than the Noctua classic, but if you are looking at buying five or six fans, that difference can quickly add up.

If the Noctua fans are a bit too plain for you and you see the fans as not only cooling, but as the best way to add some flash to your rig, there are plenty of great options with built-in lighting. In fact, there are some many options, that searching “rgb 120mm case fan” will give you more choices than you could ever read, but pay attention because not all RGB is created equal! Some case fans might look nice, but be difficult to control, or might have pretty poor performance. Luckily, at least one manufacturer has decided to develop not only the most reliable (although still not perfect) software, but also created some brilliant looking 120mm case fans, in both white and black as well. For all of those reasons, our choice for best aesthetic RGB case fan is the Corsair LL120.

The LL120 is not only an RGB fan, it is a bright 120mm RGB fan. It has a beautiful double ring design that shines like the sun inside of even tinted glass cases. And in terms of performance, the LL120 might not be of the same quality as a Noctua fan, but it generates plenty of airflow even with all of its brightness. On top of that, while not perfect, the software used to control the fan speed and lighting of the LL120 is the unified Corsair software, iCue. It may not be 100% reliable, but compared to the hot garbage we see from other manufacturers, it works and offers plenty of options.

But as we mentioned above, adding in RGB comes at a price. A three pack of the fans along with the RGB Lightning hub (but not including the Commander Pro if you want even more control through iCue) runs around $115. At 35-ish dollars a fan, that isn’t cheap. But the quality is great, the lightning is the best, and the fans still move enough air to keep your components working at their best. So if you really want something that will make your case positively glow, but aren’t ready to sacrifice too much performance, the LL120 is the fan for you.

As we said, the LL120’s aren’t cheap, so if you are looking for a less expensive option, the CoolerMaster MF120R are another strong choice and are compatible with most motherboard lighting systems. At around $18 per fan, you’re talking about a fan almost 50% as expensive as the LL140. And in case of concerns about reliability, CoolerMaster is among the best in the business, so rest easy knowing you have well-built fans with good customer service behind them. The LED’s might not be quite as pretty, but if you are on a budget, they will get the job done for cooling while still keeping your rig looking fly.

One of the only issues with the RGB on the LL120 is that they are directional, making it difficult to mount them in both directions and still get the same amount of light. The back is still plenty bright, but you lose the dual ring definition that makes the front look so nice. Corsair is yet to release a ‘two-way’ fan that looks equally good front the front (when used as exhaust) and from the back (when used as intake). So if you are looking for a fan that is flexibile because you aren’t sure of your fan set-up, or know that you will need to use them as intake, we recommend the Thermaltake RIING 120mm Premium Edition.

Not only does Thermaltake produce really good fans that move plenty of air without being overly noisy, but the Riing Premium Edition fans are the answer to complaints about uni-directional lighting. With both sides of the fan containing a bright LED ring, you get all that flashy goodness no matter which direction your fans are facing. And if you decide to recycle your fans for a future build, you can rest easy knowing that no matter your fan configuration, you’ll have plenty of beautiful lighting.

The only downside: two-way RGB comes at a price. We said the LL120’s weren’t cheap at around $35 each, including the RGB Node but not Commander Pro. Well the three pack of Riing 120mm fans is even more expensive. At $130 for the pack (including the hub), these fans come in at $40+ a piece. They perform well, but not as well as Noctua fans or even as the LL120’s, so you are choosing to sacrifice some performance to get lighting on BOTH sides of the fan. For someone that has hyper efficient components or doesn’t mind setting an aggressive fan curves, and that has the budget, these fans are definitely something special and should keep you happy for many builds to come.

While the Thermaltake Riing might be the best implementation of the two-way fan design, a few of the more ‘budget’ implementers have begun experimenting with similar designs. Of these, UpHere has come up with the UpHere RGB123-5 120mm RGB Wireless fan that is similar in that it offers two-way lighting. Unfortunately, customization is much reduced since lighting is set with the included remote, but UpHere is a relatively reliable brand and at $35 for a five-pack (or $7 a fan), it is hard to complain.

Like all different parts of cooling, case fans are important to get the most out of your PC. They keep your components working at peak performance, and add important flair to your PC if you opt for some RGB options. Depending on the fan you choose, you can customize to fit your favorite color scheme (such as a white-themed PC build) have perfect silent performance, flexibility in direction, or a mixture of all of the above.

140mm case fans are often more efficient, as on average they move more air and are quieter than the smaller 120mm variants (due to lower RPMs), but that often comes at an increased price and require a larger case with bigger mounting points. If you can fit them, check out our guide to 140mm case fans, but if not, these 120mm options will be sure to keep your battlestation cool, in both senses of the word!